How Time Flies When You're Having Fun...Quilting!

It's so hard to believe that it's been 3 weeks since I last posted here. After the blog hop earlier this month, I had lots of projects to catch up on, and most were for other people. We also had several birthdays this month and a baby shower, all of which meant quilt projects to make! 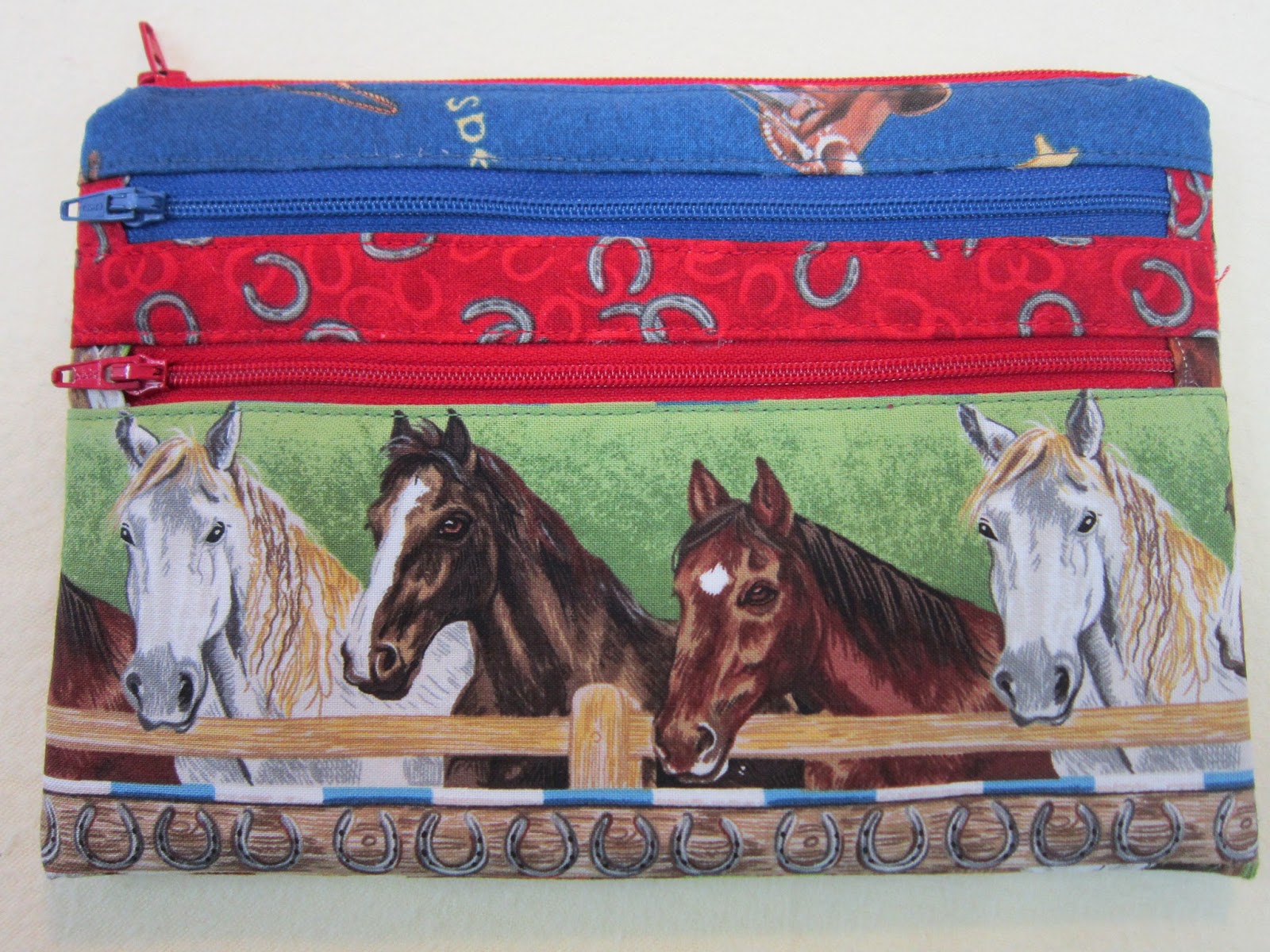 My granddaughter, Belle lives far away with her dad and we only see her during the summer and occasionally at Christmas. Belle loves horses, so I made this triple-zip pouch and sent it to her for her birthday. 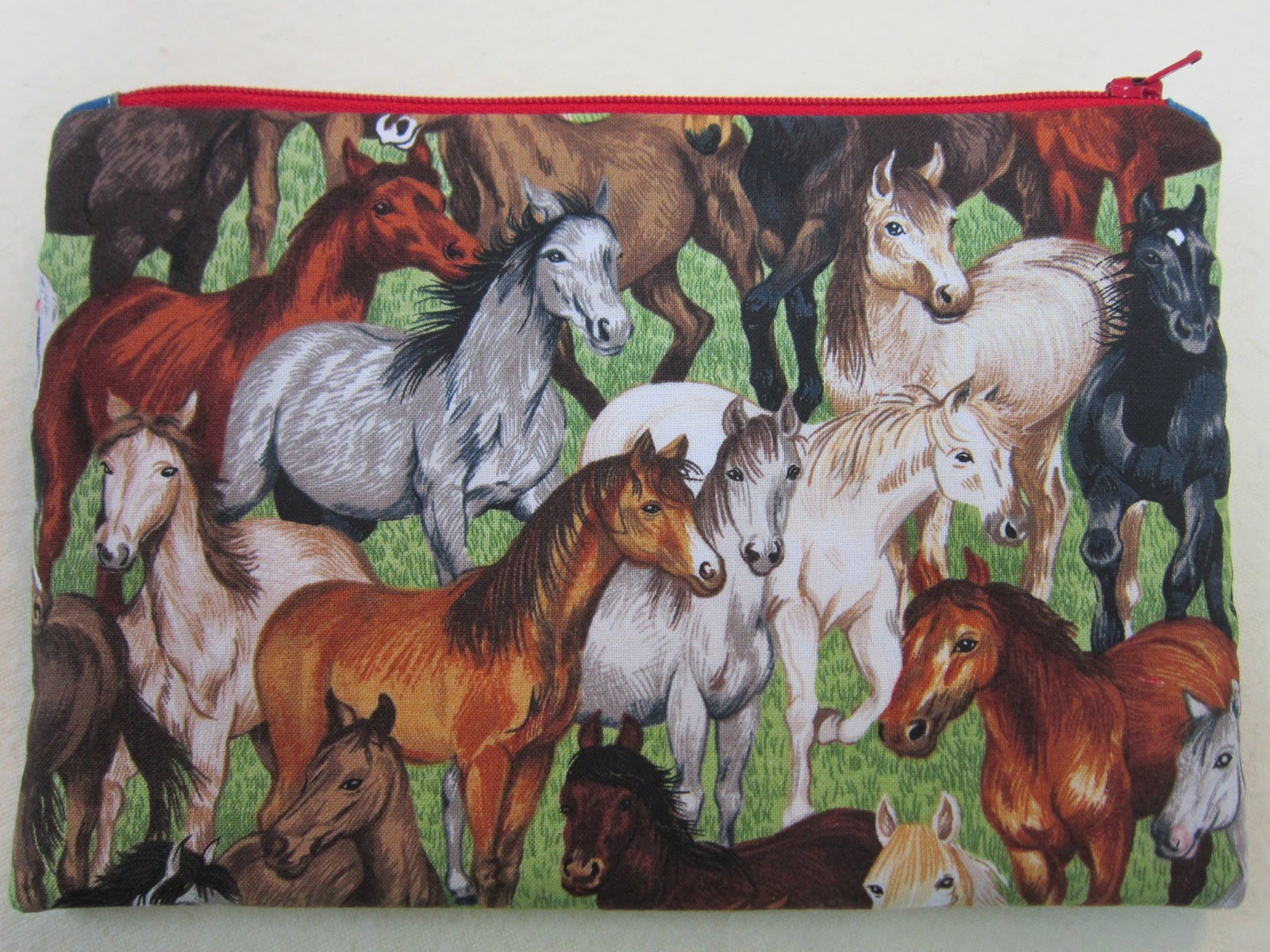 Here's the back of the pouch. I probably should have made 2 pouches while I was at it. My youngest daughter, Mary also loves horses and when she sees this (she's away at college) I know she's going to want one too! 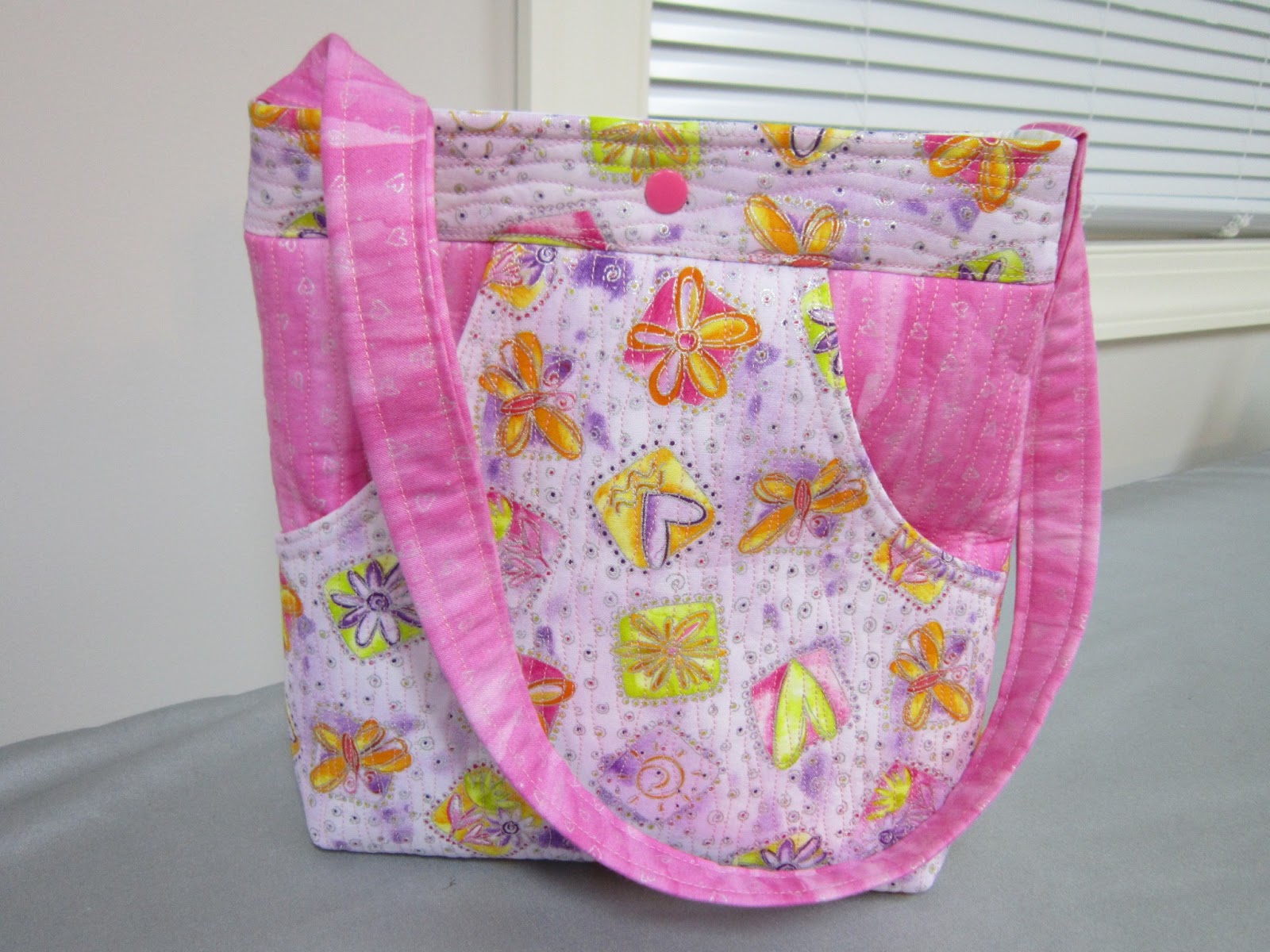 Belle's younger sister, Lily (who lives next door) also had a birthday this month. She turned 8 and will be getting baptized soon so her mom (my daughter) asked if I would make Lily a bag (to hold the new scriptures she'll be getting) instead of a triple-zip pouch. So I went looking online and found some great patterns by Geta Grama. This is her "Belle" bag pattern which I reduced to 75% and the size was perfect. 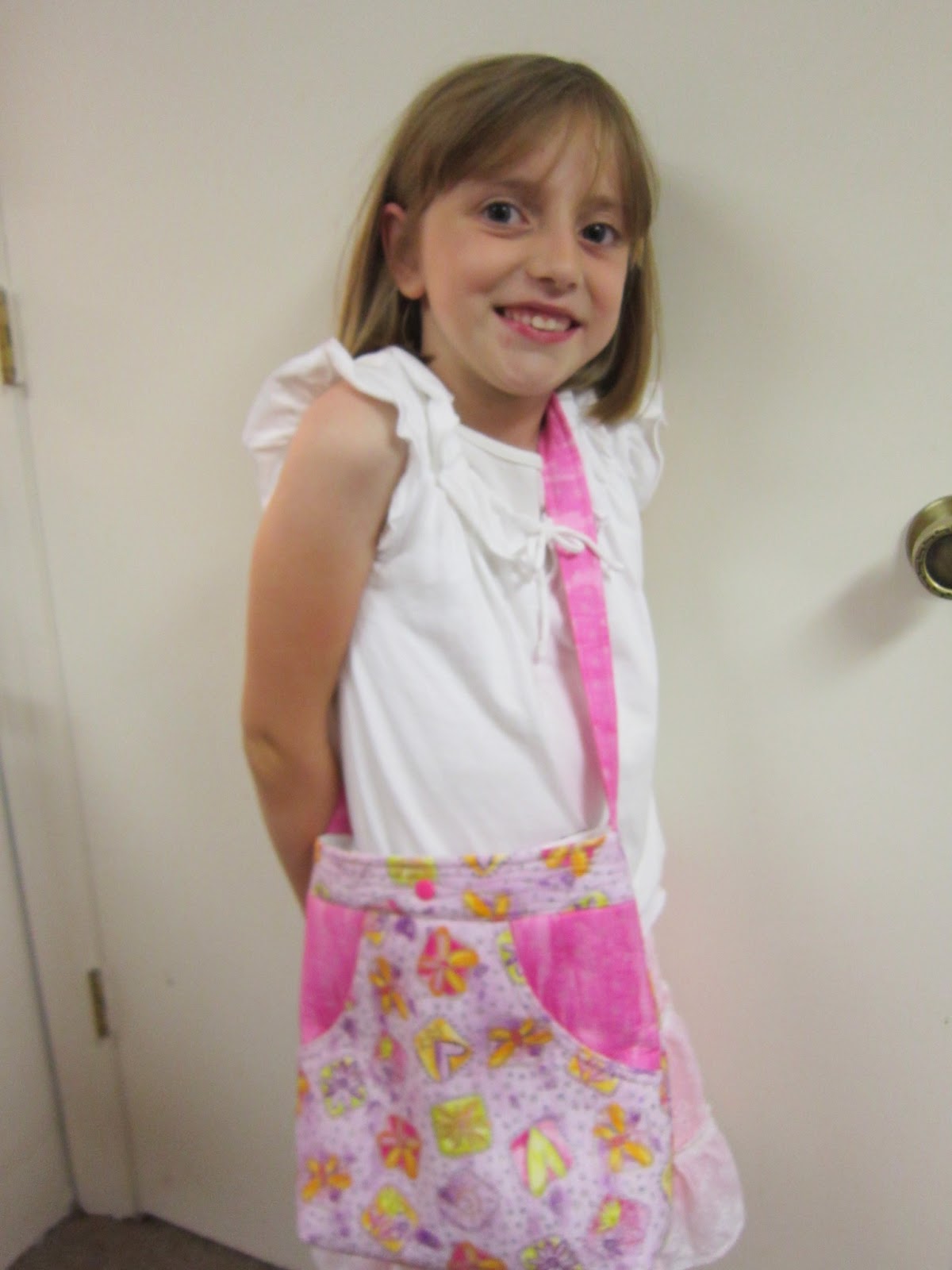 And here's Lily, posing with her new bag! 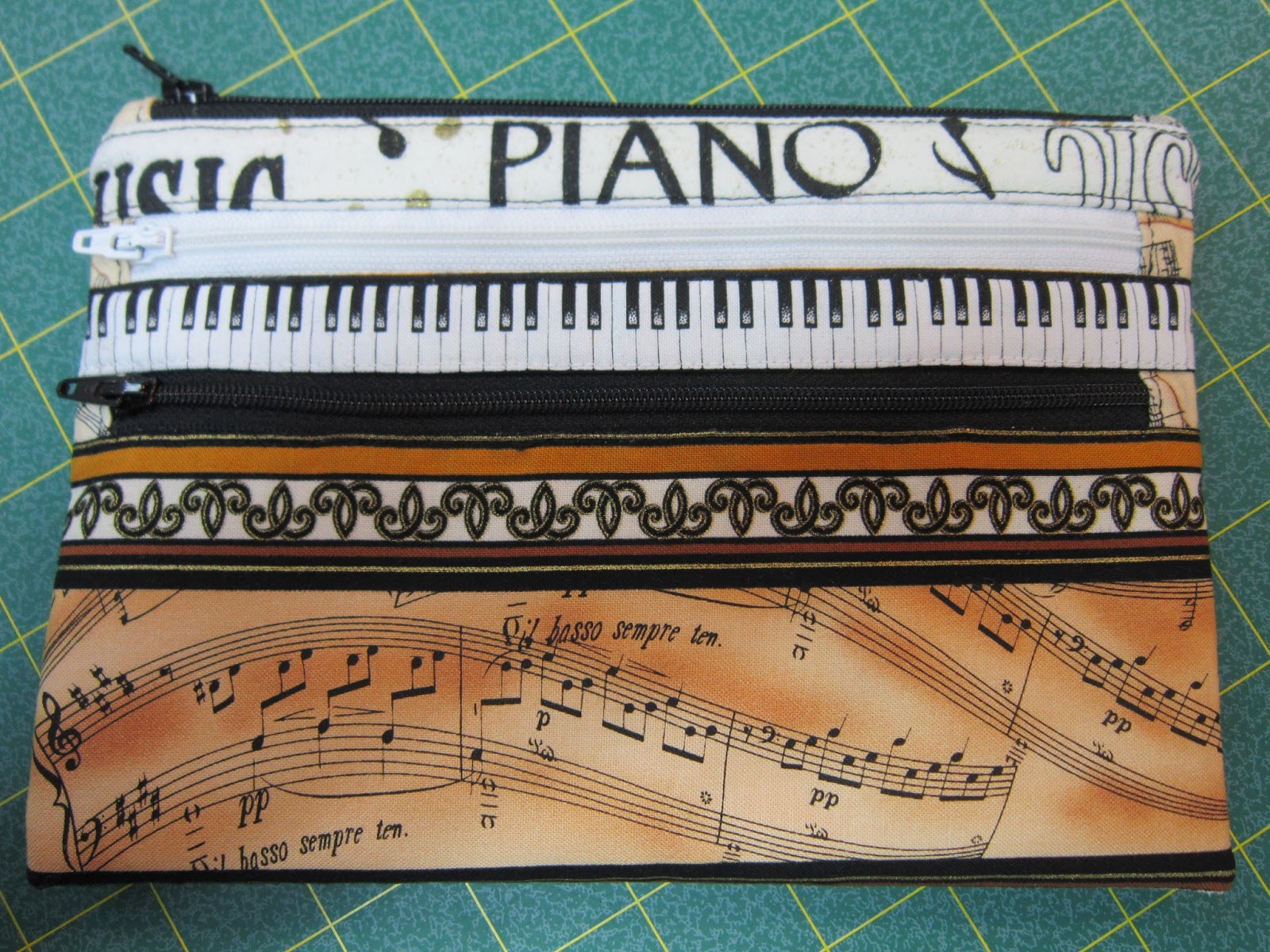 I began taking piano lessons last year and I just love playing and I love my teacher! I'm 7 months older than her and this month was her birthday. I thought she might like a triple-zip pouch too, so I made one with some of the music fabrics I've been collecting. She loved it! 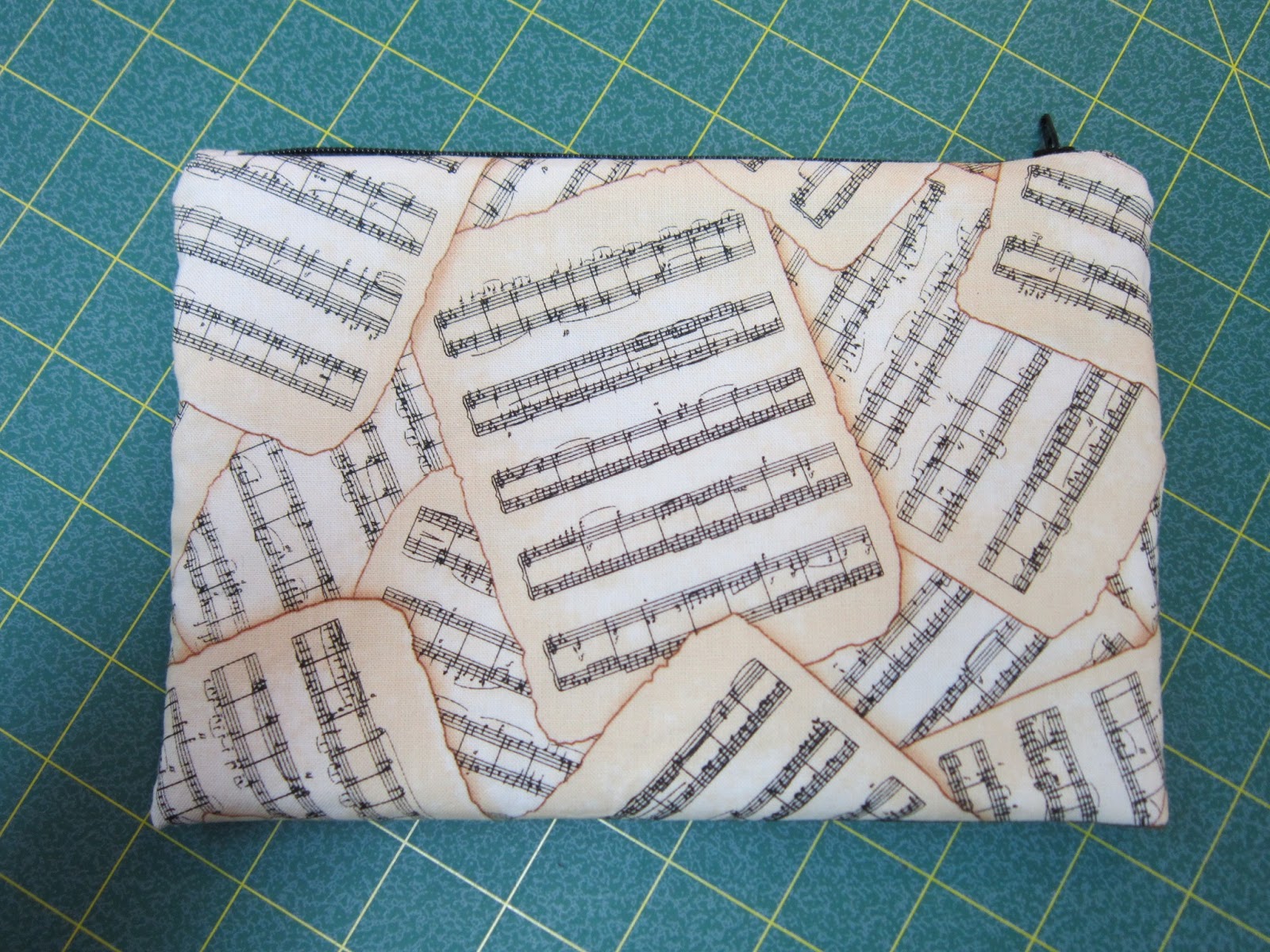 Here's the back. She tried to see if she could recognize any of the music pieces but the only one she could tell for sure was "Moonlight Sonata" which is on the front. I was impressed that she could just look at it and tell what it was!

In addition to all these small projects, I've been doing lots more quilting than usual. My daughter-in-law gave me her "Underground Railroad" top and I loaded it onto my quilt frame last month. After the blog hop, I was finally motivated to get quilting. It was only a twin-size, so it didn't take long to finish. Then one of the church ladies who comes here to quilt finished the top to her Martinsville Rose Quilt (you can see mine in this post). She was here Tuesday night and I had it loaded before she got here. I thought I might have her help with the quilting, but the top was so uneven that I didn't dare let her try. As it was, I was able to get the whole full-size quilt quilted, squared and trimmed by 9:00 that night. She took it home, ready for binding. 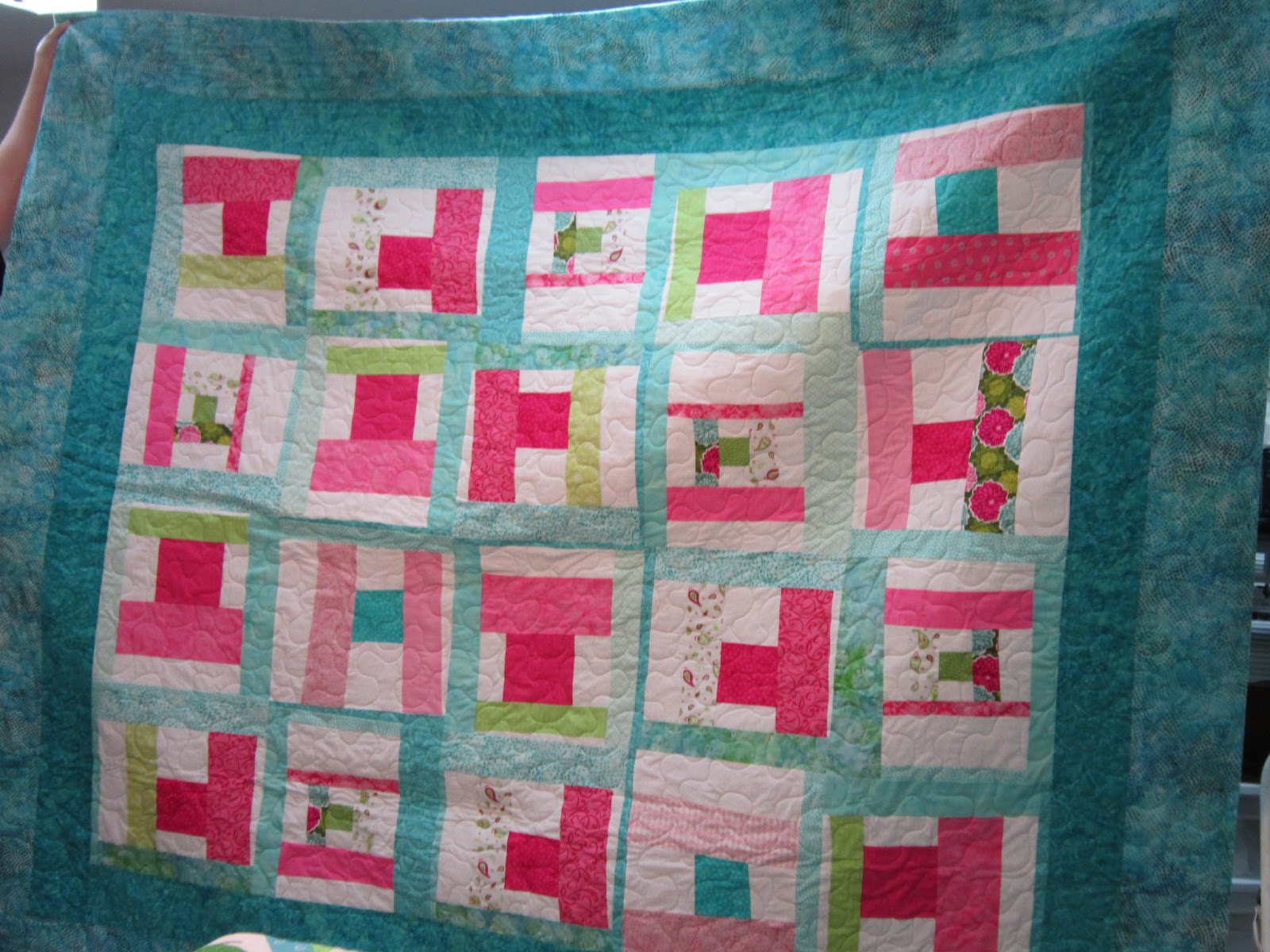 My sister-in-law made this quilt for her daughter who will be going away to college this fall. I guess she had planned to only make a twin-size, but it ended up being a queen! It was so big that she was overwhelmed with the idea of trying to quilt it on her sewing machine and she asked if I would quilt it for her. So I did.On all of these quilts, I only quilted a simple meander or loops. That's the best way to get quilting done quickly and easily. 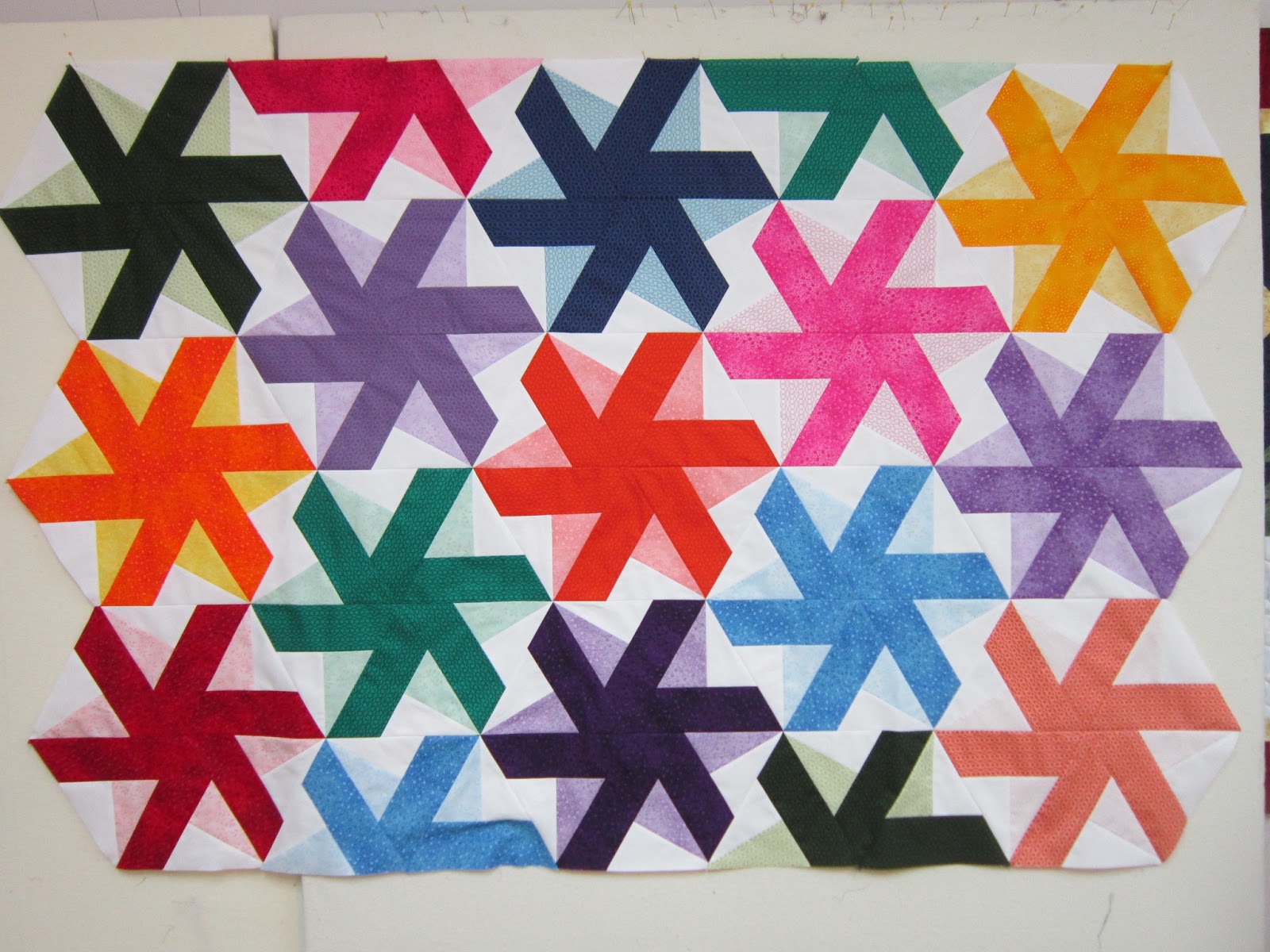 Early this month I got my "Bloom Bloom Pow" blocks sewn together into a flimsy. The instructions say to cut off the blocks on each end to square it up and finish it. Fortunately before I cut in to it, I found someone who had made the same quilt and instead of cutting off those ends, they had added extra pieces of white fabric between the blocks. I really like how theirs turned out (although it meant sewing Y-seams) and I plan to do that too. In fact, I've got an additional plan up my sleeve, but I'll reveal that once I see how/if it actually turns out! 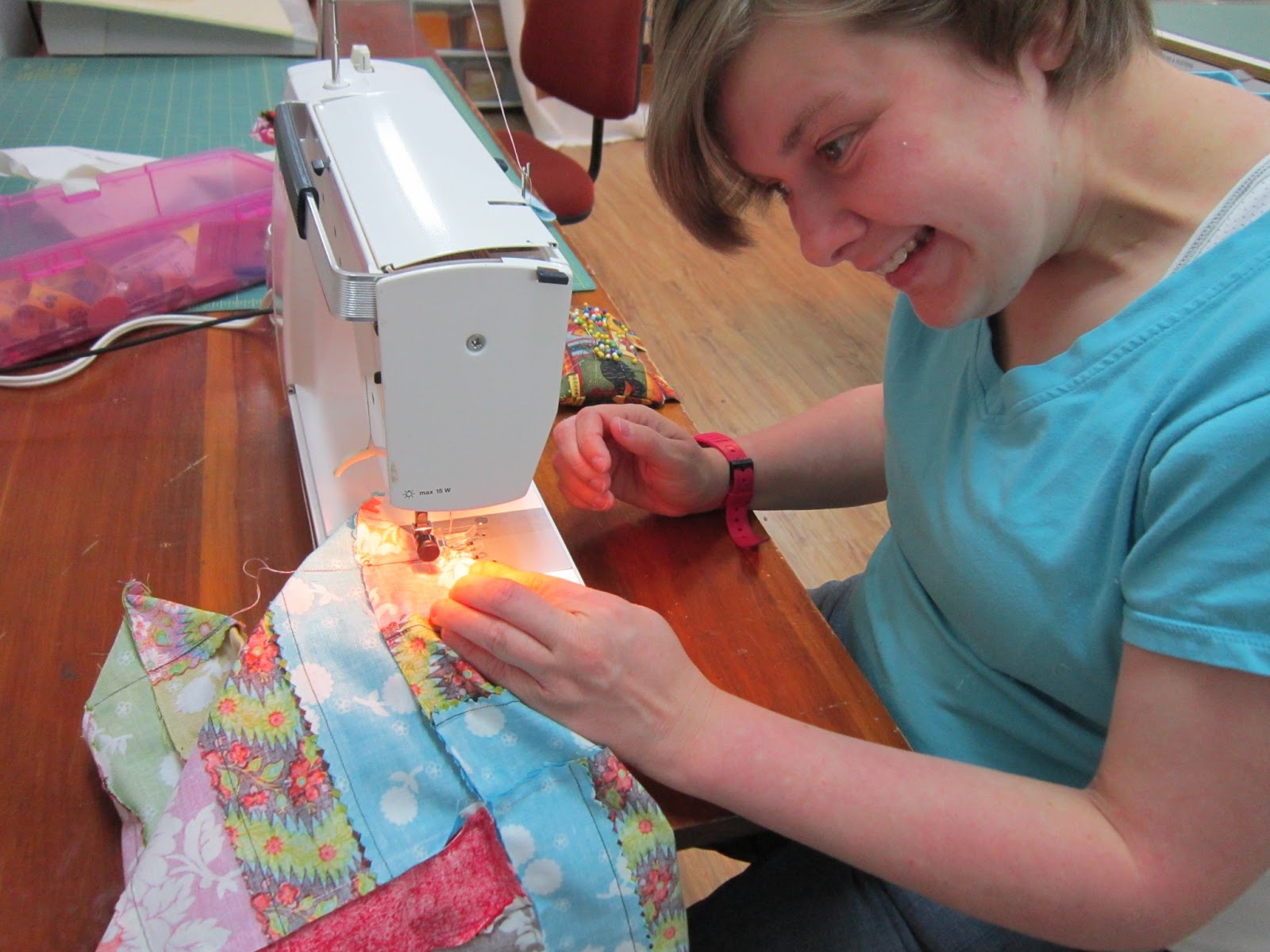 Laura has also been busy this month. I had some strips I had won that I wasn't that crazy about, so I let her sew them together. But then I was wondering what I should have her do with them and the idea of a tote bag came to me. 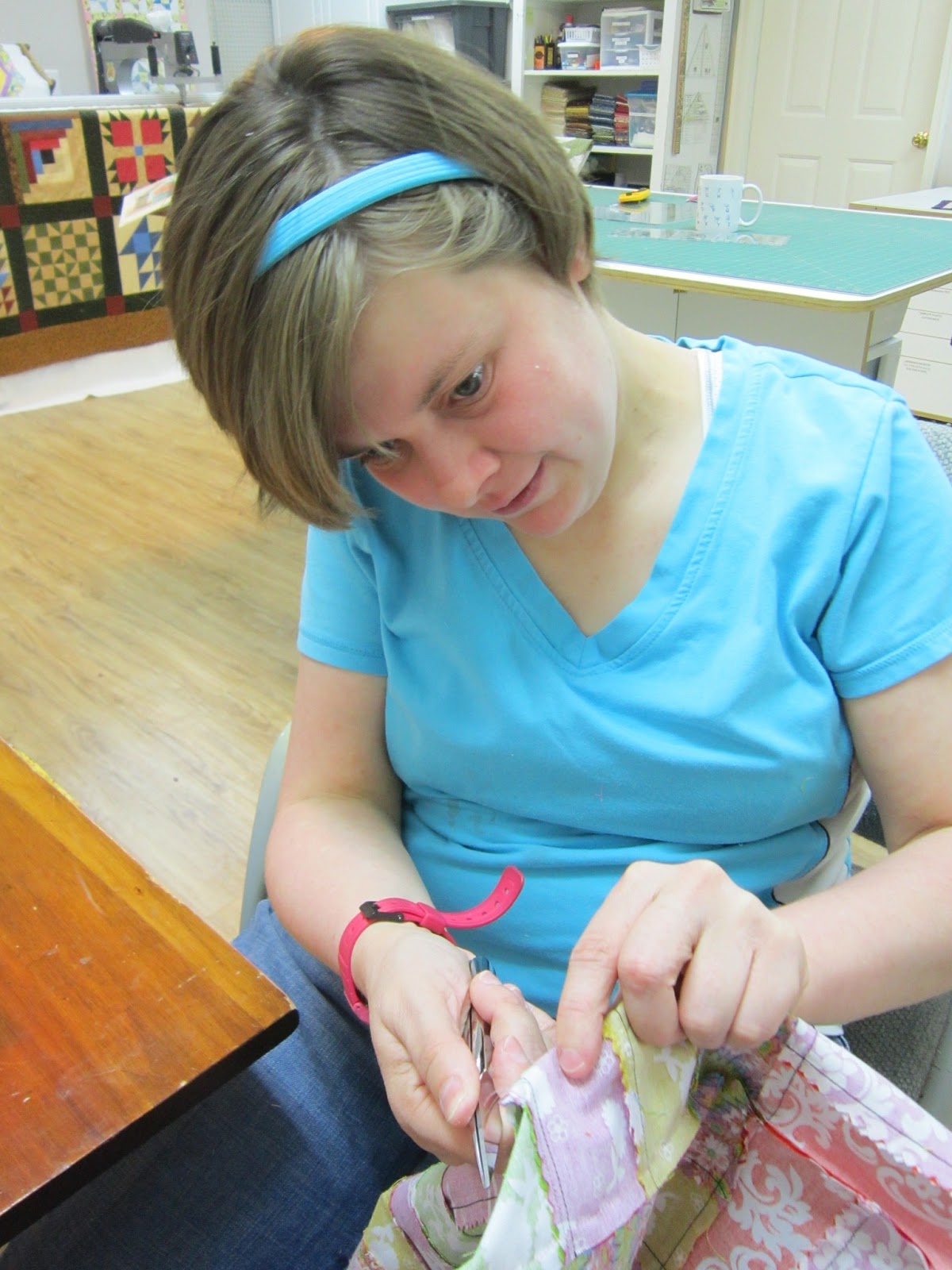 She pretty much made the whole bag herself, although I had to give her some assistance on sewing the lining into the bag. She was so cute--when the bag and lining were all sewn together, she thought there was a big mistake because all she could see were the wrong sides of the fabrics! 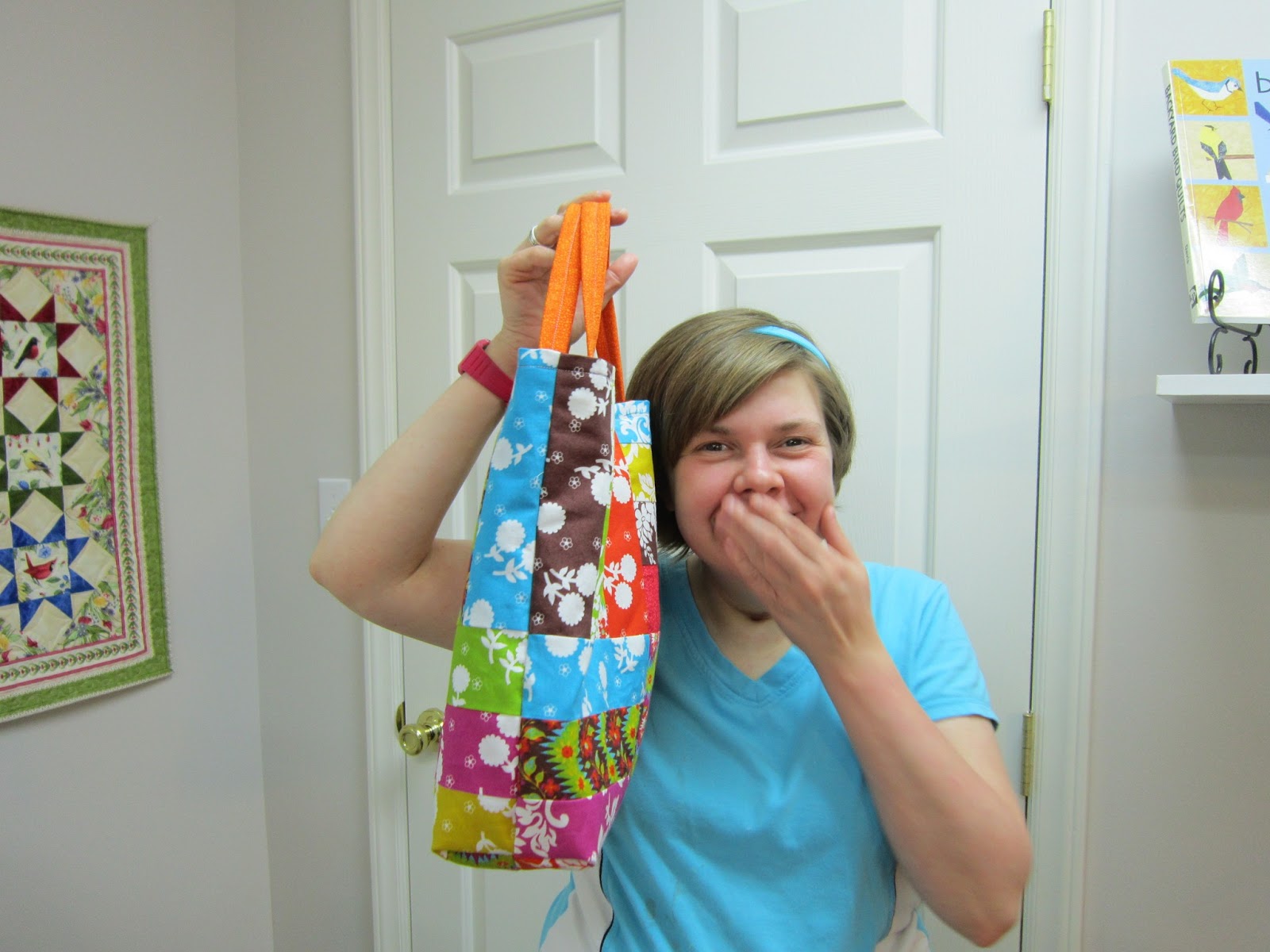 So I told her, "Watch this, it's magic!" and I turned the bag right side out through an opening in the lining seam. As you can see, she really liked that kind of magic! 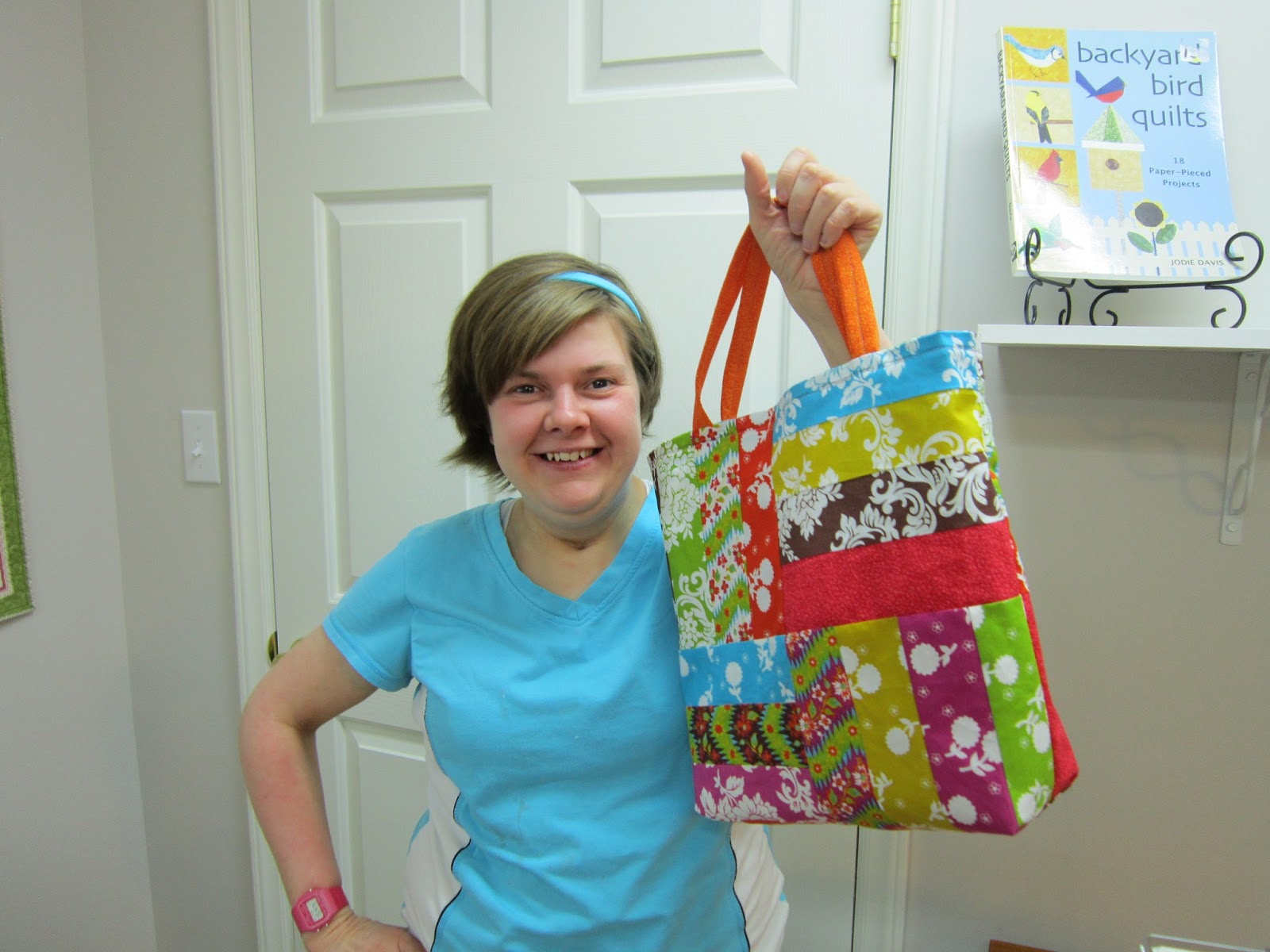 Here's her finished bag that she's filled with lots of junk and taken many places already! 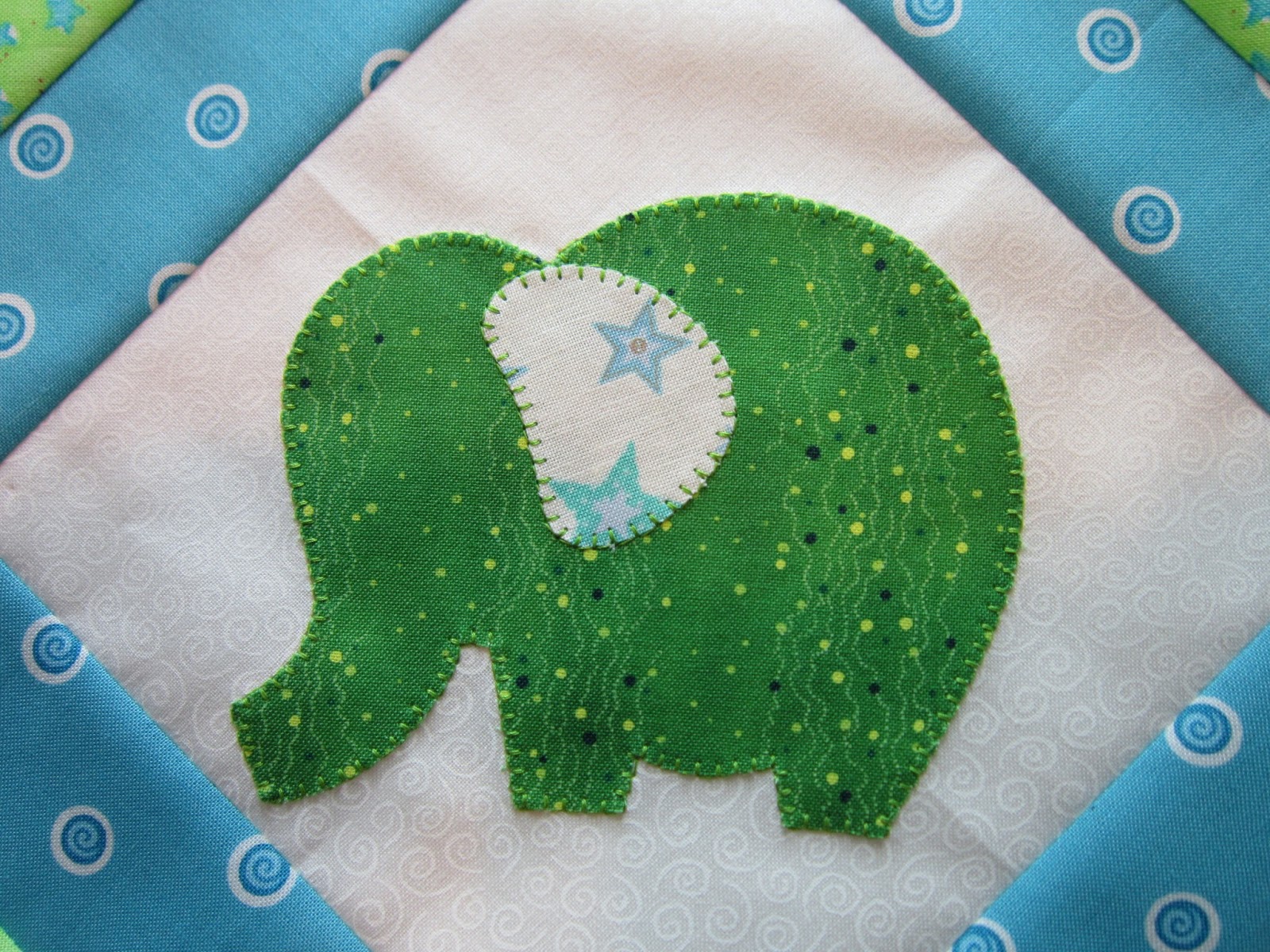 My younger son and his wife are expecting their first baby, a boy, the first of July, but their baby shower was this past Saturday. Sabina was decorating the nursery with bright green and teal and with elephants. I had collected fabrics for a quilt for baby Linus over several months and last week I started pulling them together for the quilt. I had looked at different pictures of elephants online, but ended up just drawing my own design and this is what I came up with. There are TWELVE elephants appliqued onto the quilt (it's a LARGE baby quilt!) and I made the mistake of sewing down the bodies before I remembered to add the tails. 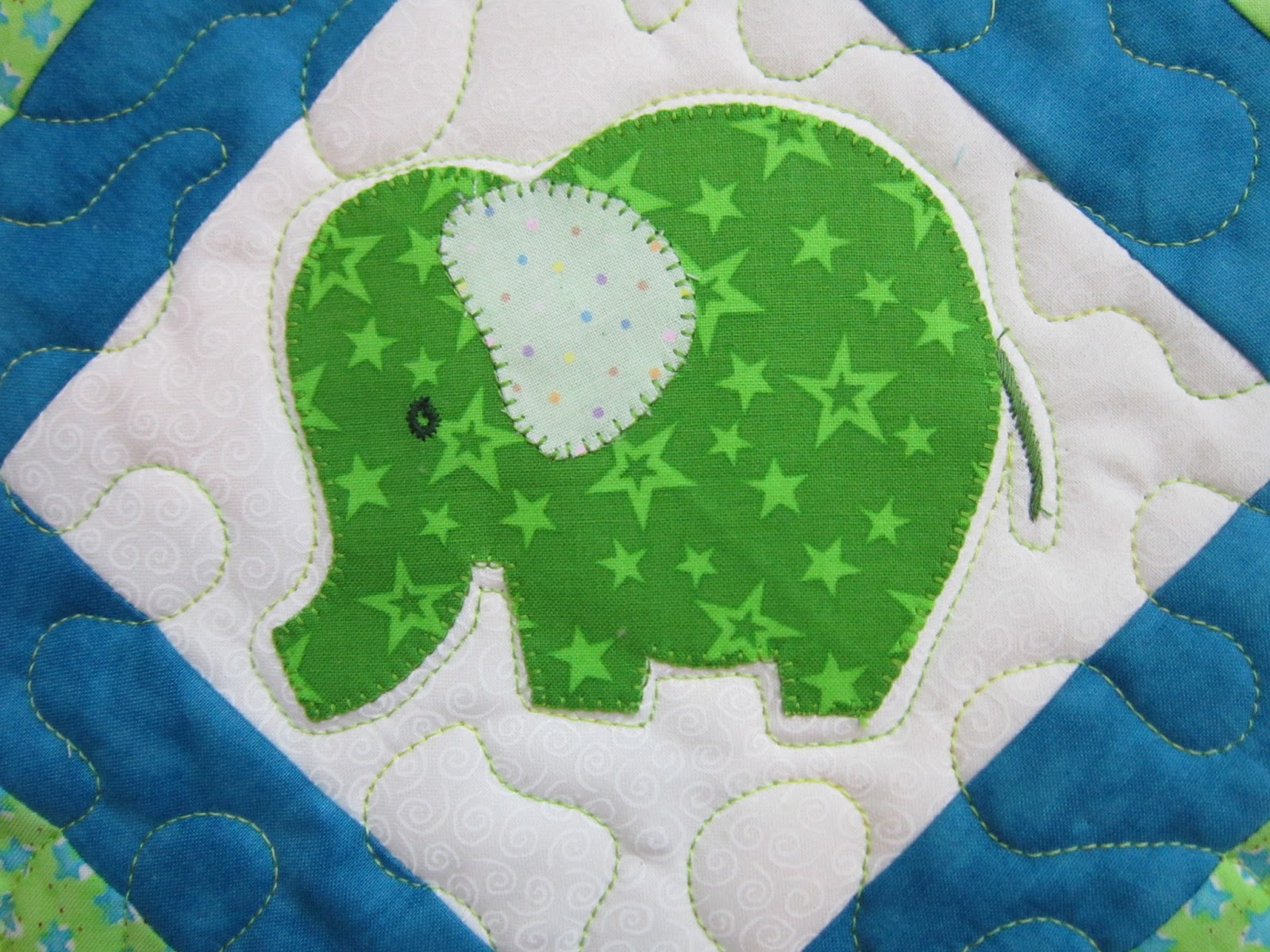 This was actually a practice block I made, not one that was part of the quilt. I used a round buttonhole stitch on my sewing machine for the eye and then just freehand stitched a little tail on each elephant. I thought they turned out rather cute...and fortunately my daughter-in-law thinks so too! 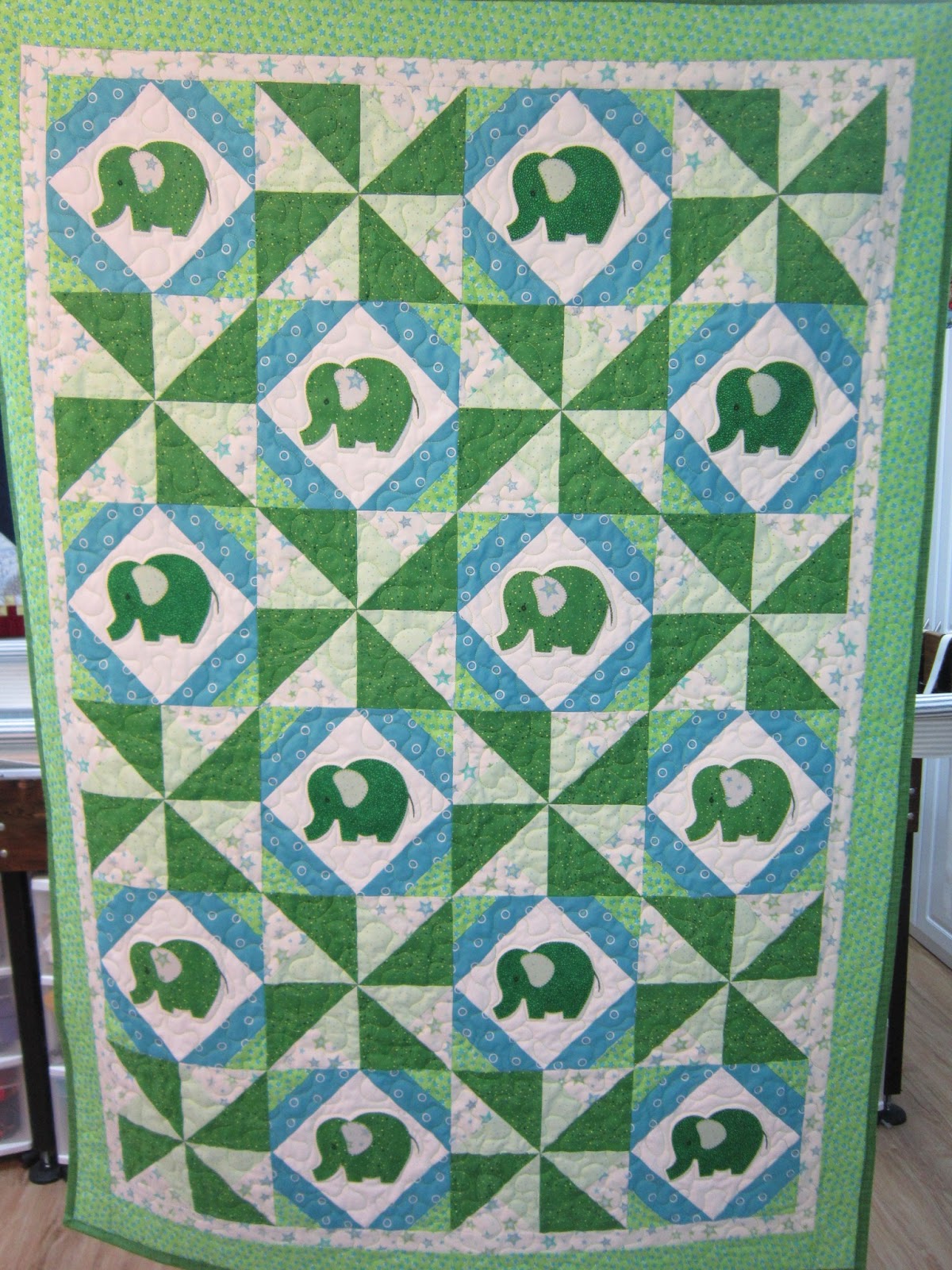 Here's the finished quilt. It was a little too wide to use the width of a piece of fabric for the backing, so I had to piece it. I thought I would need to go buy some more fabric but then one of my daughters suggested I use flannel. I have a whole bolt of white flannel and that was the perfect solution.

Phew! This has been quite the long blog post and I apologize. I've really done even more than I've posted about here, but that will have to wait for another day. Meanwhile, I'm going to try and do a better job of posting more regularly...and not writing such long posts!

Welcome! Today is the 3rd day of the "It's For the Birds" Blog Hop and this is my day to present my projects. I would first like to extend many thanks to Madame Samm of Sew We Quilt who comes up with all these great blog hops and works tirelessly behind the scenes to make sure they happen successfully. I would also like to thank Mary Winegar of I Piece 2 for being such a wonderful cheerleader for this hop.

It seems like most of us love birds and I'm no exception! My particular favorites are hummingbirds and bluebirds, although I like almost all of them. (We also own chickens, turkeys and guineas, so I like those kinds of birds too, but none of my projects include them!) 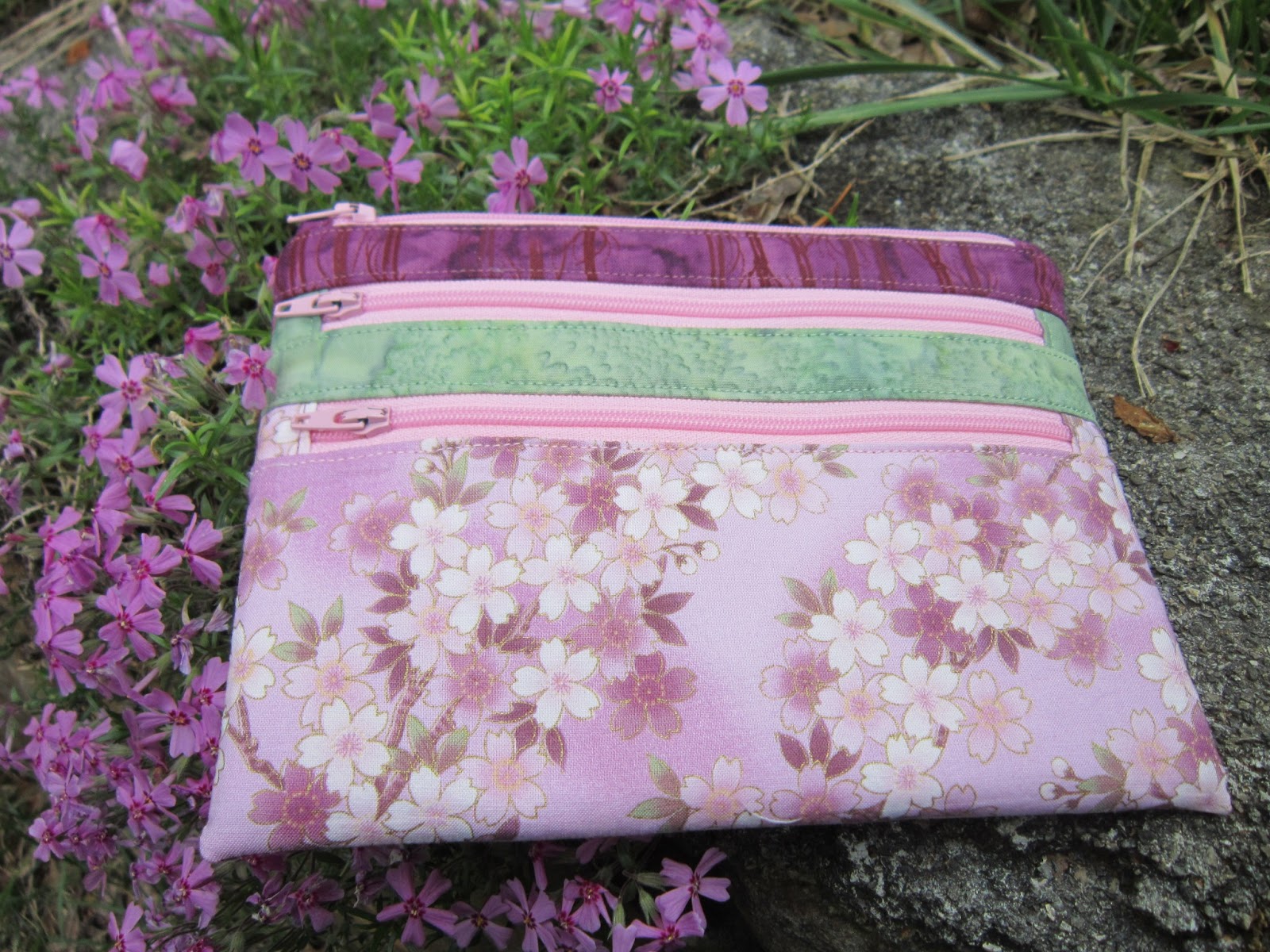 We celebrated my mom's 80th birthday this past weekend. I'd already given her a quilt for her birthday, but she also wanted a triple zip pouch. Mom loves to feed hummingbirds and I figured I could kill 2 birds with one stone (ha! no pun intended--I don't really want to kill ANY birds!) so... 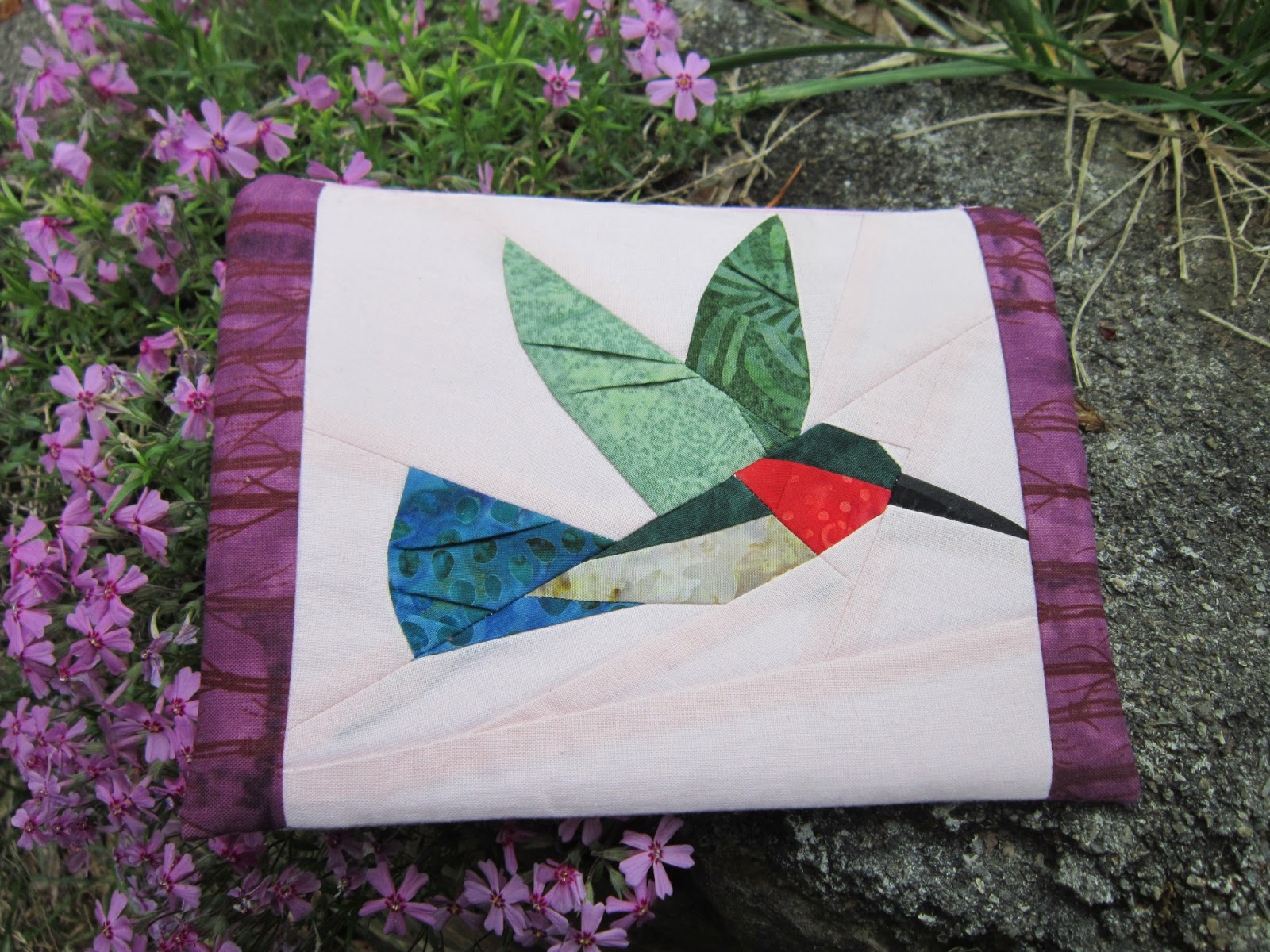 I put a paper-pieced hummingbird on the back! This was a pattern from the book, Backyard Bird Quilts by Jodie Davis. I've been wanting to make some of the projects in that book and this seemed to be the perfect opportunity. This particular pattern is rather unique in that the paper-piecing actually includes curves. You stitch the pieces on as you normally would, but then press creases into them when you turn them. I was quite pleased with how it turned out. 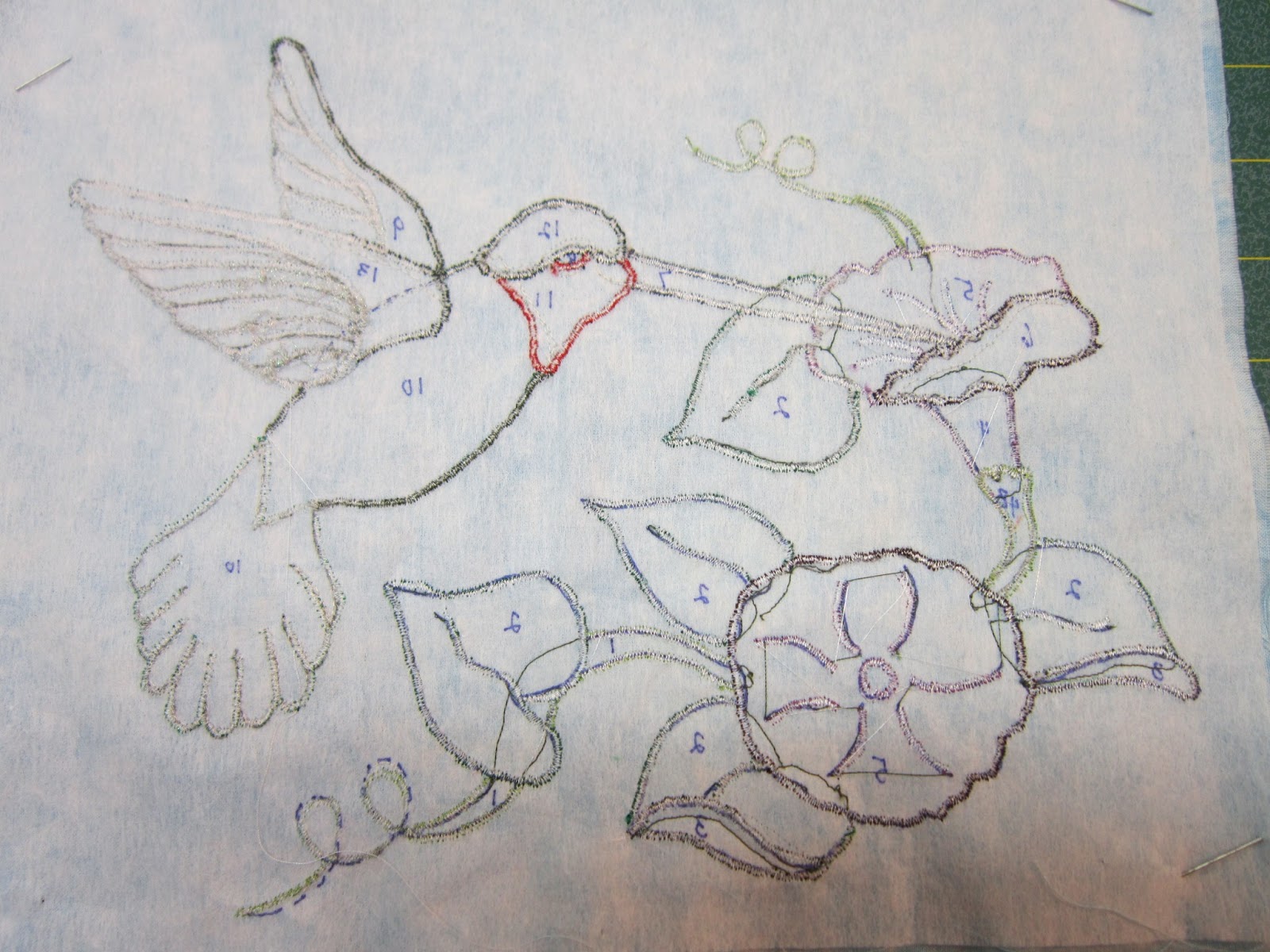 When I was considering projects to work on for this hop, I remembered a class I took back in about 2007 from Susan Brittingham called, "Upside-down Applique." At the time, I was rather intimidated by all the free motion stitching and I thought working from the back was confusing. Now that I've done plenty of free motion quilting and lots of paper piecing, I figured it was time to give this project another try. It really is sort of to applique what paper piecing is to piecing. I had just barely started working on this when I took the class and then set it aside for "someday." 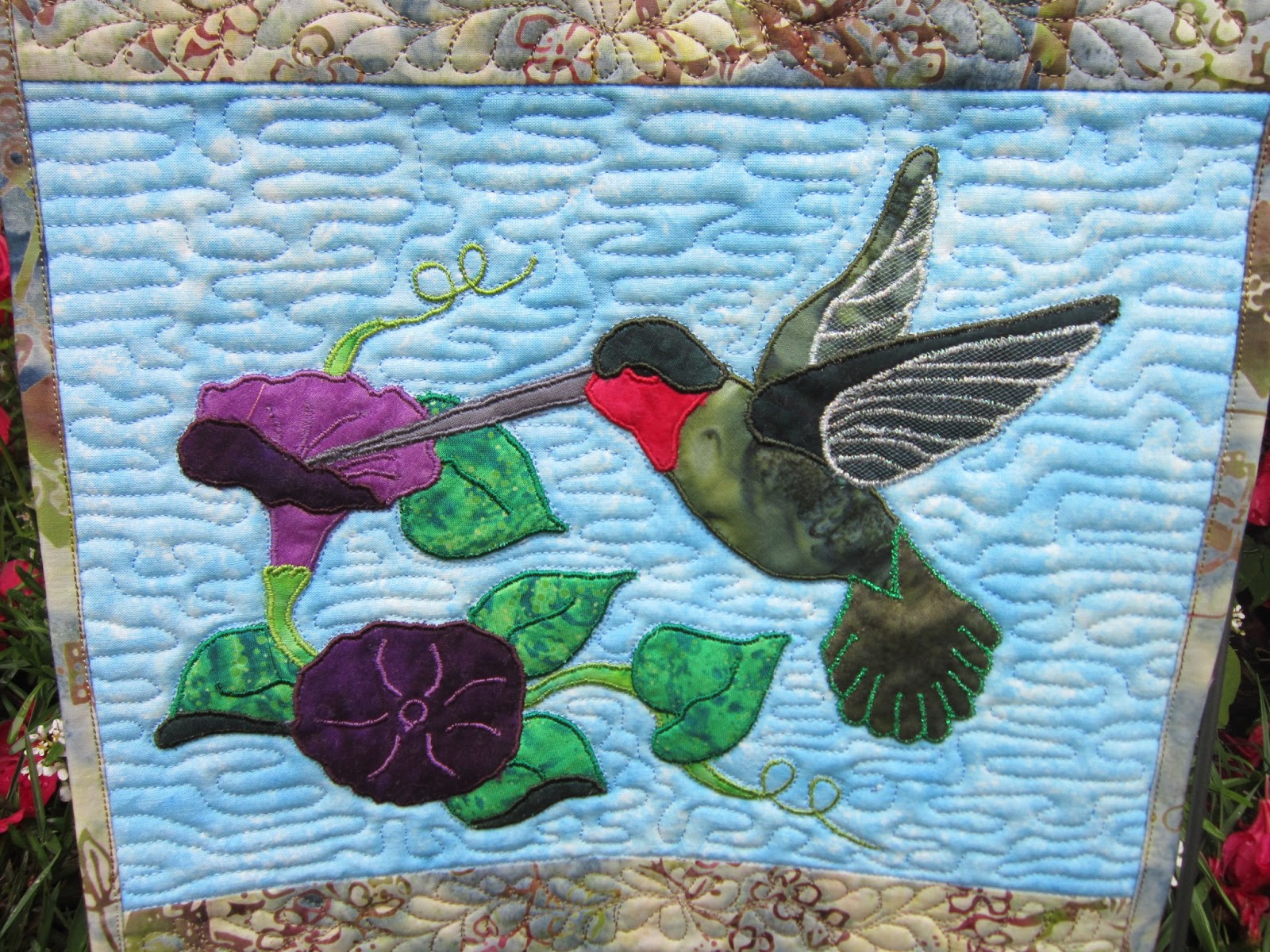 Someday finally came when this blog hop was announced, so I pulled the project out of storage and finished it. There are net overlays on the wings and tail, which is one of the reasons for using this particular technique. You can't really tell from the photo, but I used iridescent threads on the wings and tail too. The fabrics I used were the ones that we were originally given when I took the class. I'm a bit a disappointed with some of the lack of contrast, particularly with the hummingbird's bill, but I guess this is just one of those "learning experiences!" 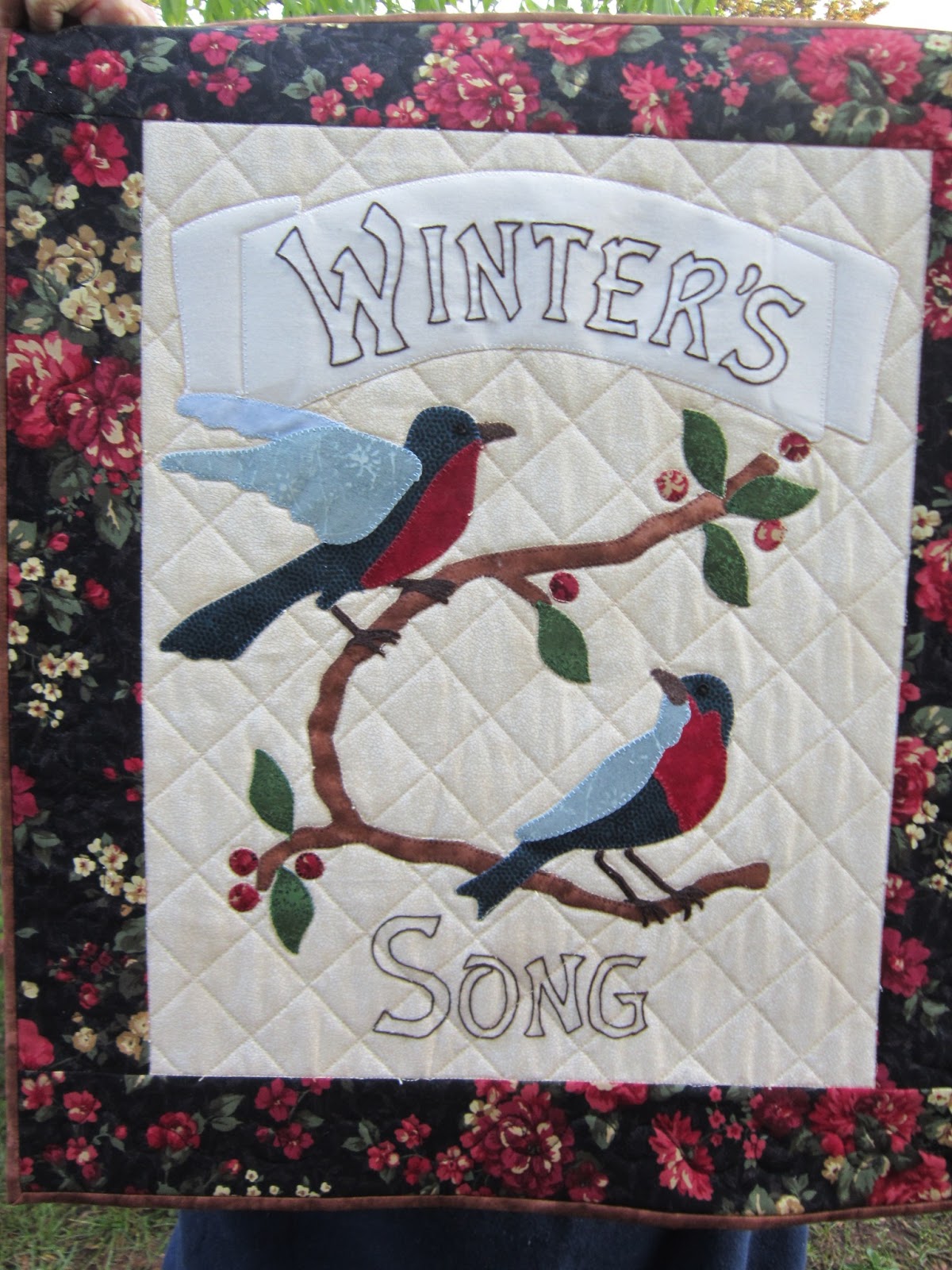 This was another unfinished project that I finally got done. It was a kit I had bought years ago and just never got around to making. It's such a relief to have it completed! I'm not sure if those birds are supposed to be bluebirds, but they look enough like bluebirds to suit me! 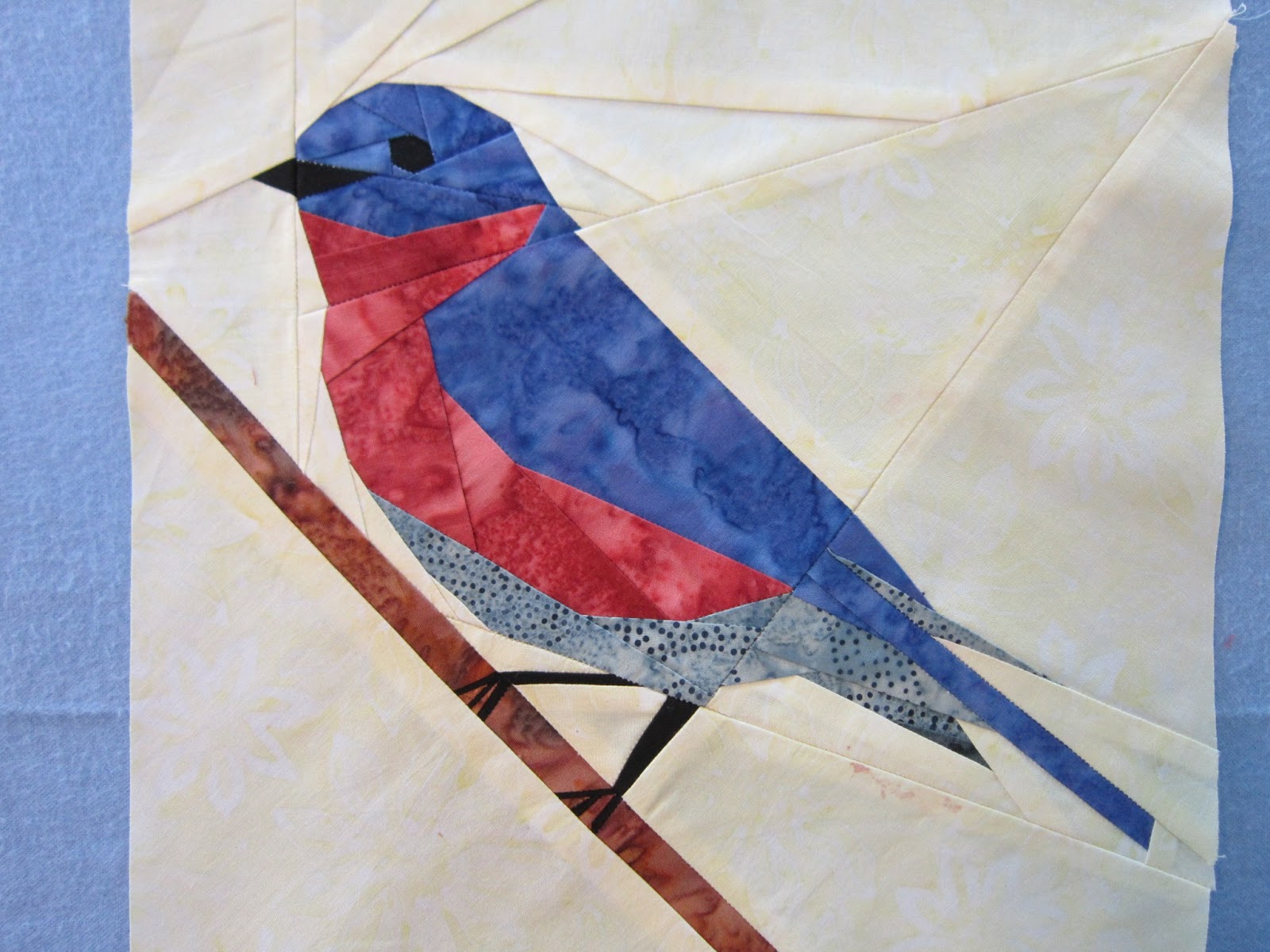 Finally, while I had some momentum going with working on bird projects, I decided it was time to make this paper-pieced bluebird that's a free pattern offered on Craftsy and designed by Liljabs. This was another project that I really wanted to make. I noticed that one of the blogs on Tuesday included this same block. It wasn't difficult to make, except for the feet--those are the tiniest pieces that I think I've ever paper pieced! I ran out of time to make it into a project, but I think I'm going to use it to make a cover for my sewing machine.

It wasn't until preparing for this hop that I realized just how many bird patterns and projects I have! There are so many more I would have liked to make, but I guess they'll just have to wait for another hop!

Thanks for coming and visiting today! I enjoyed sharing my birds with you!

Be sure to visit all the other blogs and their wonderful bird projects today too: