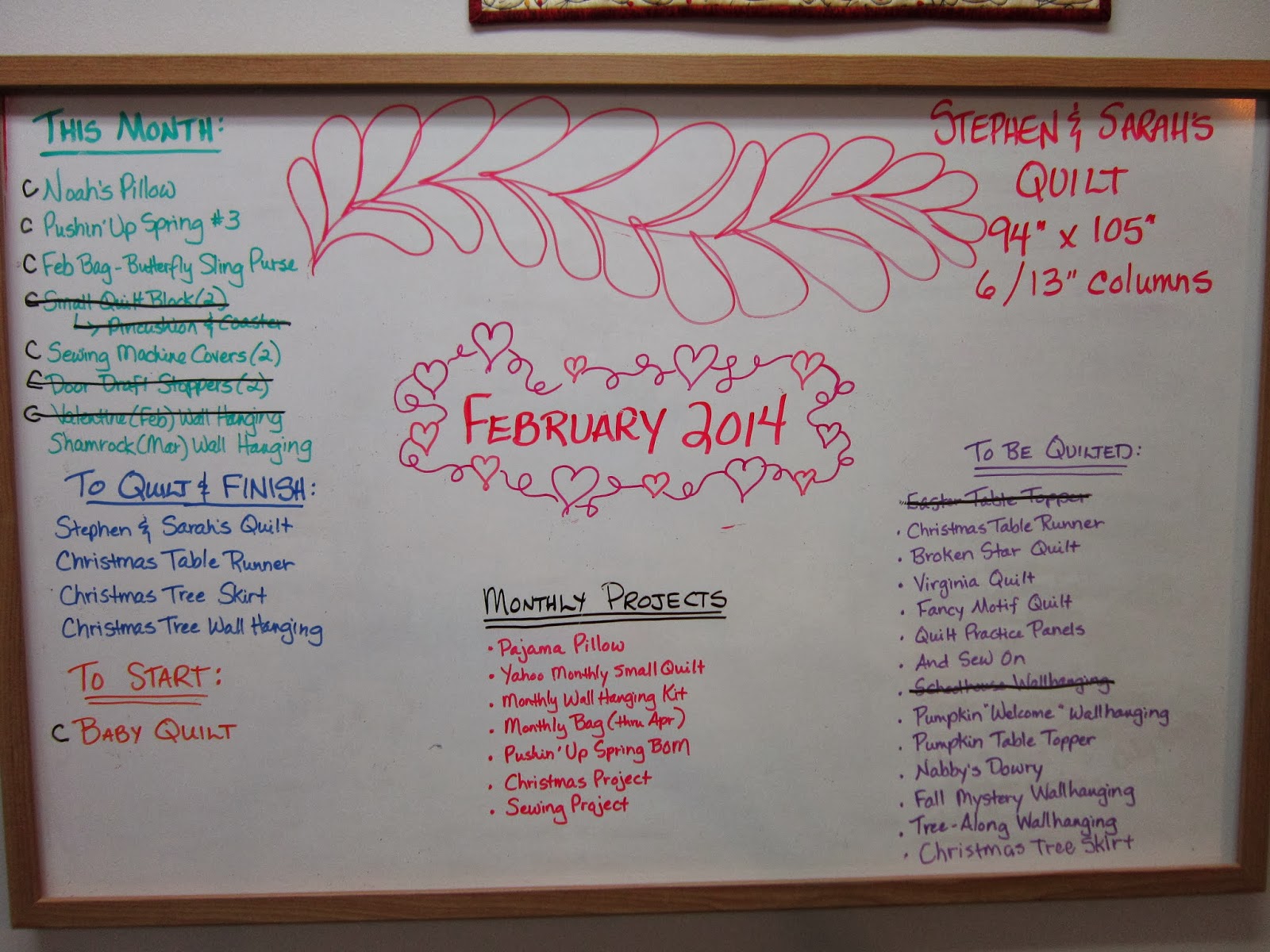 As I've mentioned in a previous post, I keep a dry-erase board on the wall in my quilt studio where I make lists of projects I'm working on or wanting to make, usually on a monthly basis.

At the beginning of the year, I make a list of all my projects that need quilting, all that are WIPs, and specifically those that I want to complete during that year and haven't really started. I also try to break the larger projects down into some kind of a monthly format. Some of them are already done for me (Block of the Month projects) and some I have to set up myself, like making the pillows for my grandkids this year, doing a sewing (non-quilting) project each month, and doing a Christmas project each month.

Then each month, I'll decide which projects I'll tackle that month (the ones that are already in some kind of a monthly format are already decided--I just have to plug in that month's block or particular project.) I keep a list in a notebook (one of the ones I made covers for last month), but I also write it on the dry-erase board so I can easily see what I've done and what there is left to do.

I also mentioned before that I spend the first part of each month cutting out all my projects for the month. That REALLY makes everything go so much more quickly! As I cut out a project, I write a big "C" next to it on the dry-erase board. Then once the project is finished, I can cross it off my list. I LOVE being able to cross off finished projects! 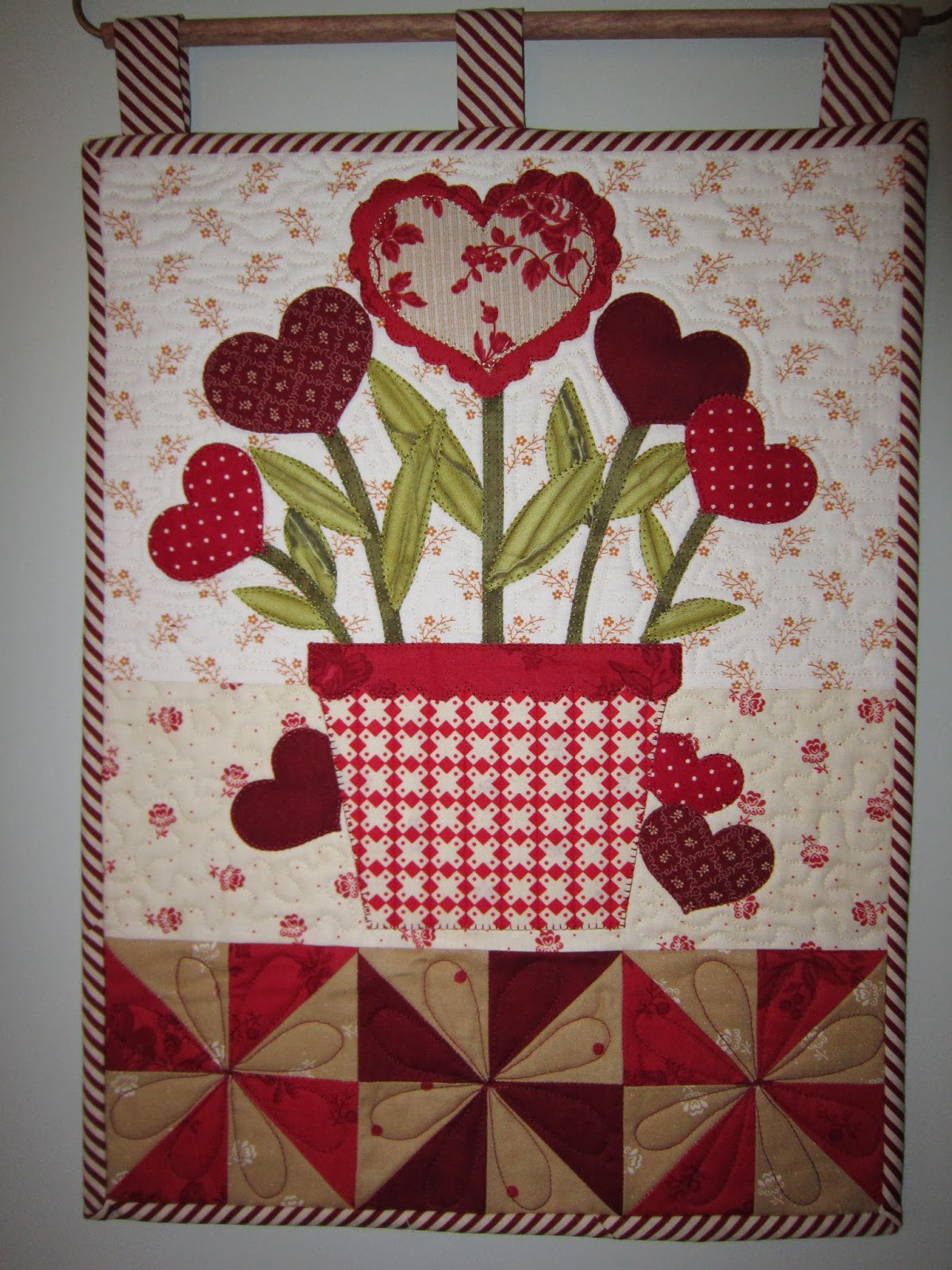 One of the projects I decided to do this year is Shabby Fabrics Little Blessings Block of the Month--I love these little wall hangings! I've made the January and February ones and now I'm waiting for the March kit so I can get it finished before March begins. 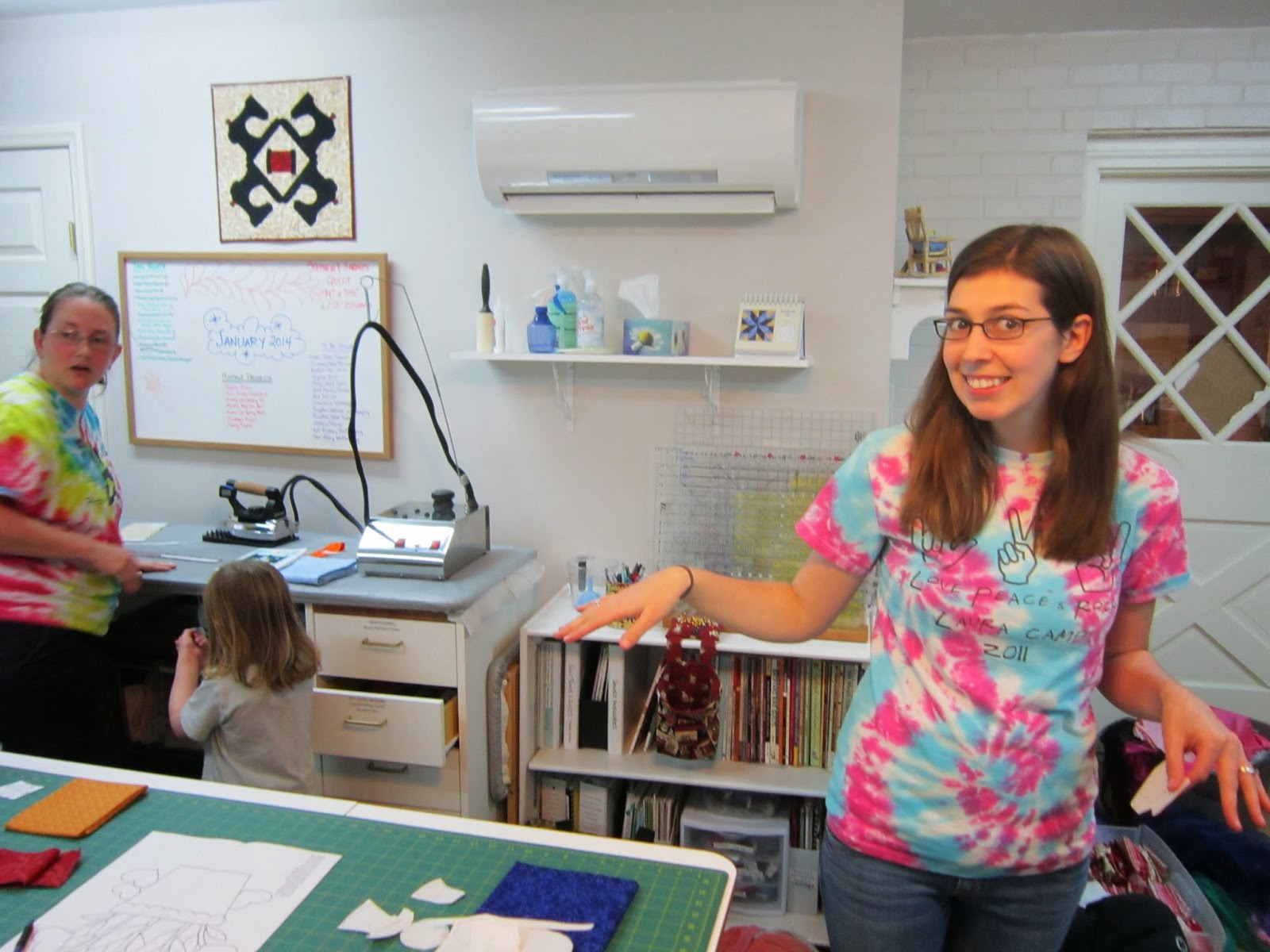 My daughter and daughters-in-law fell in love with those wall hangings too and wanted to make them, so now they're coming over here every Tuesday and we're working on them together. 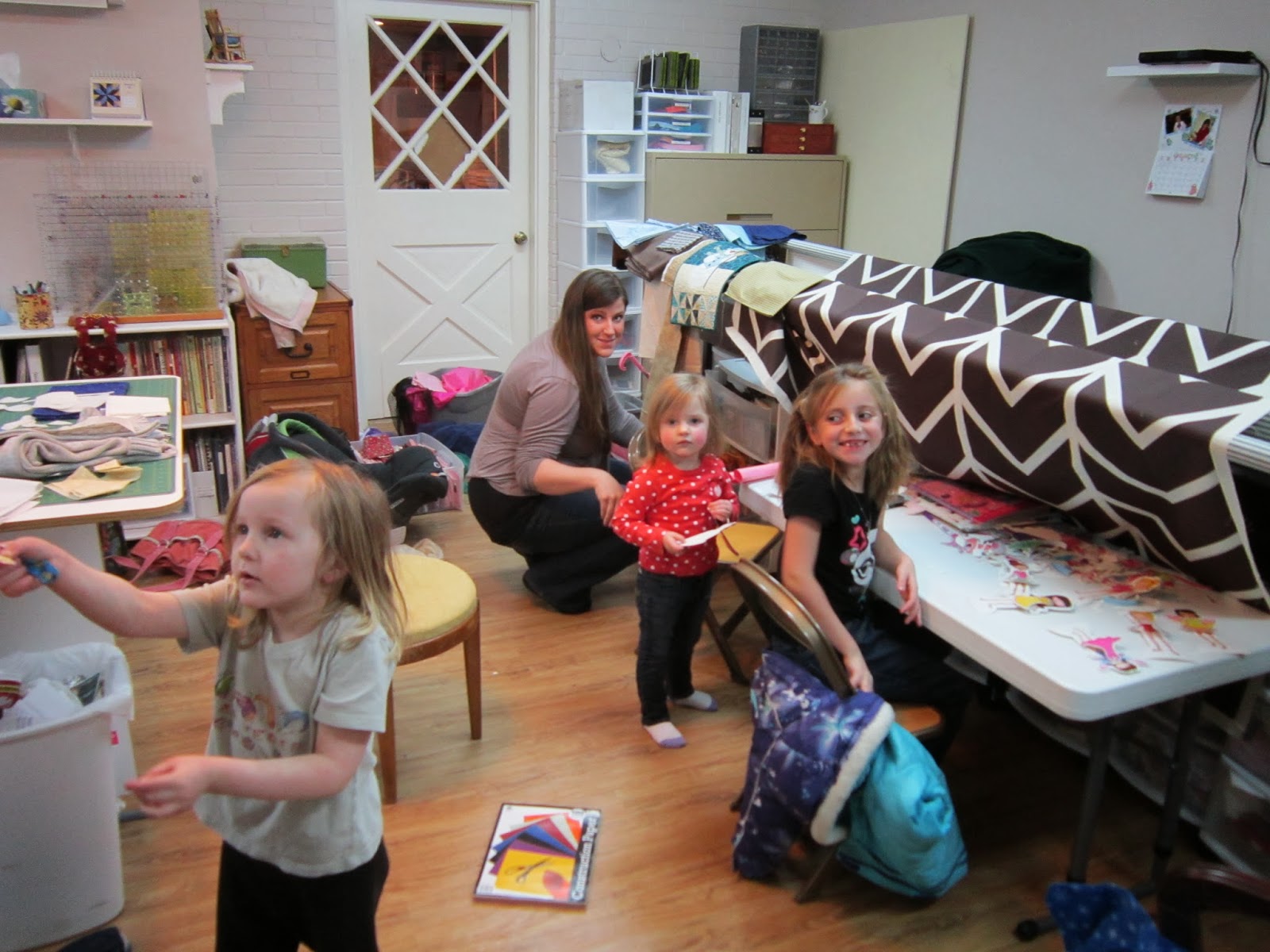 As you can see, we have lots of little helpers... 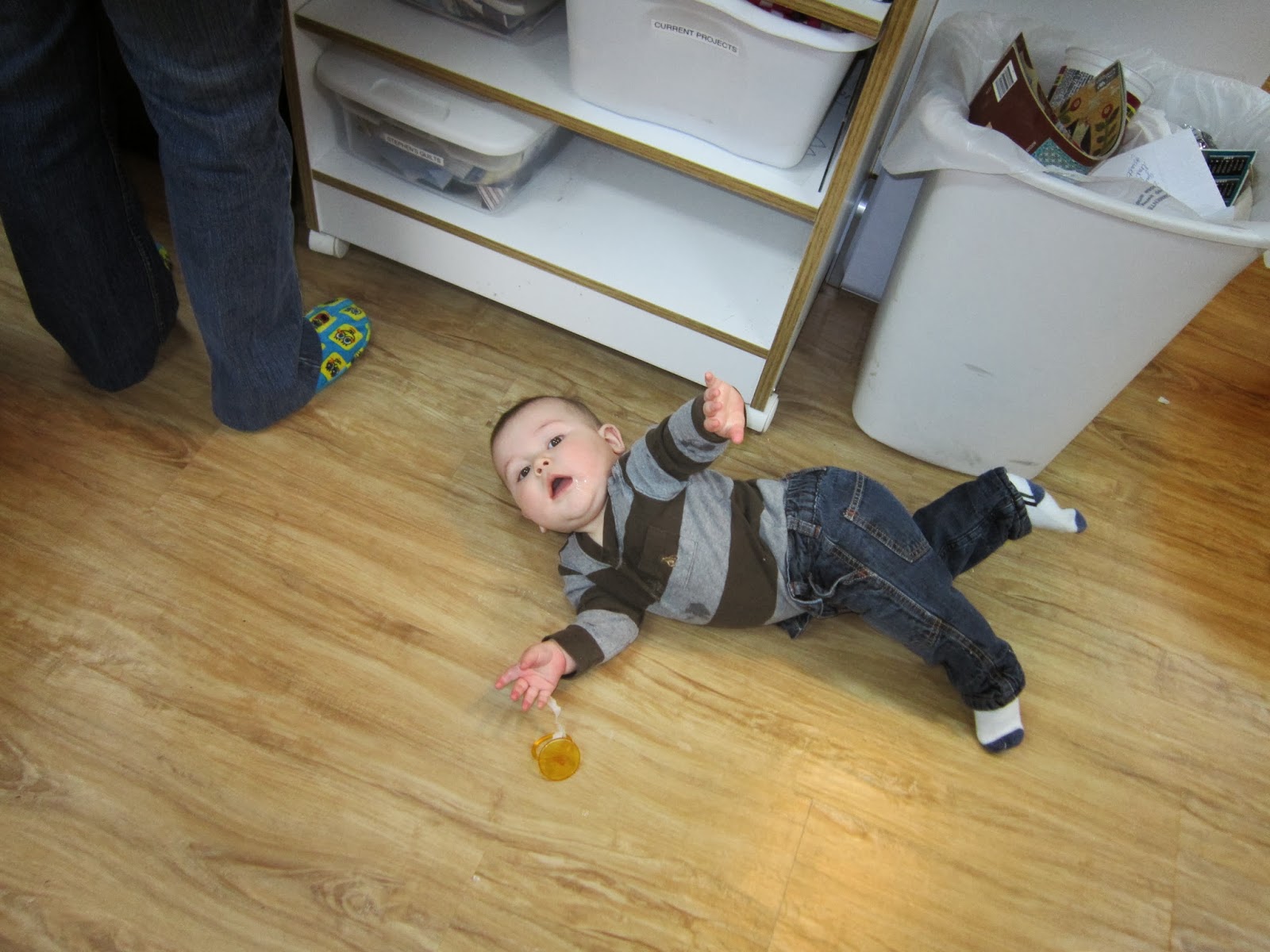 ...and even littler helpers! 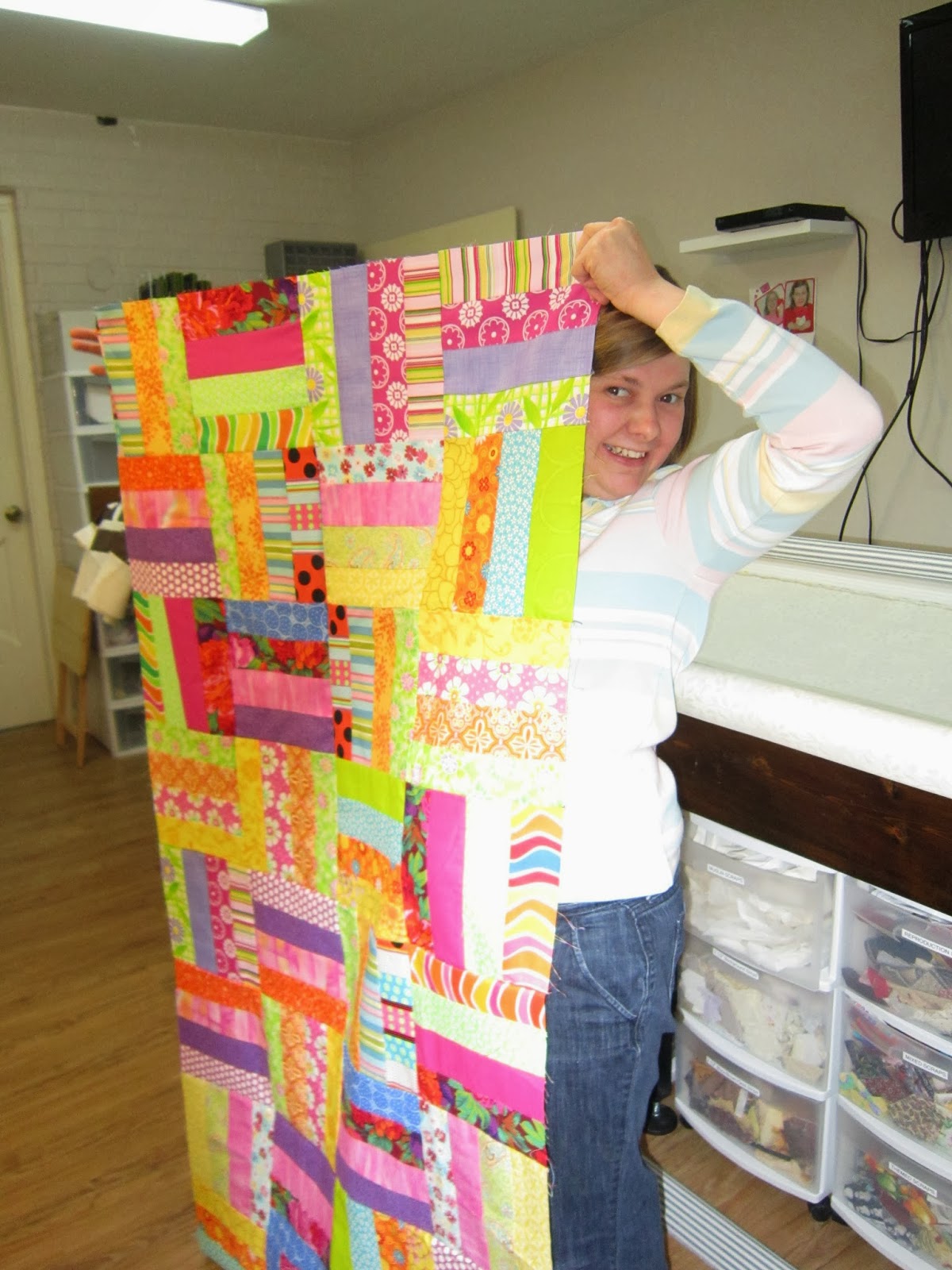 With her sister and sisters-in-law here sewing, Laura wanted to get back to sewing too. I found a stack of blocks she had made earlier in the year and pinned them together for her to sew. I guess she must be catching on to how to assemble a quilt because after she put all the blocks together, she asked me about adding borders. I suppose that will be next week's project! 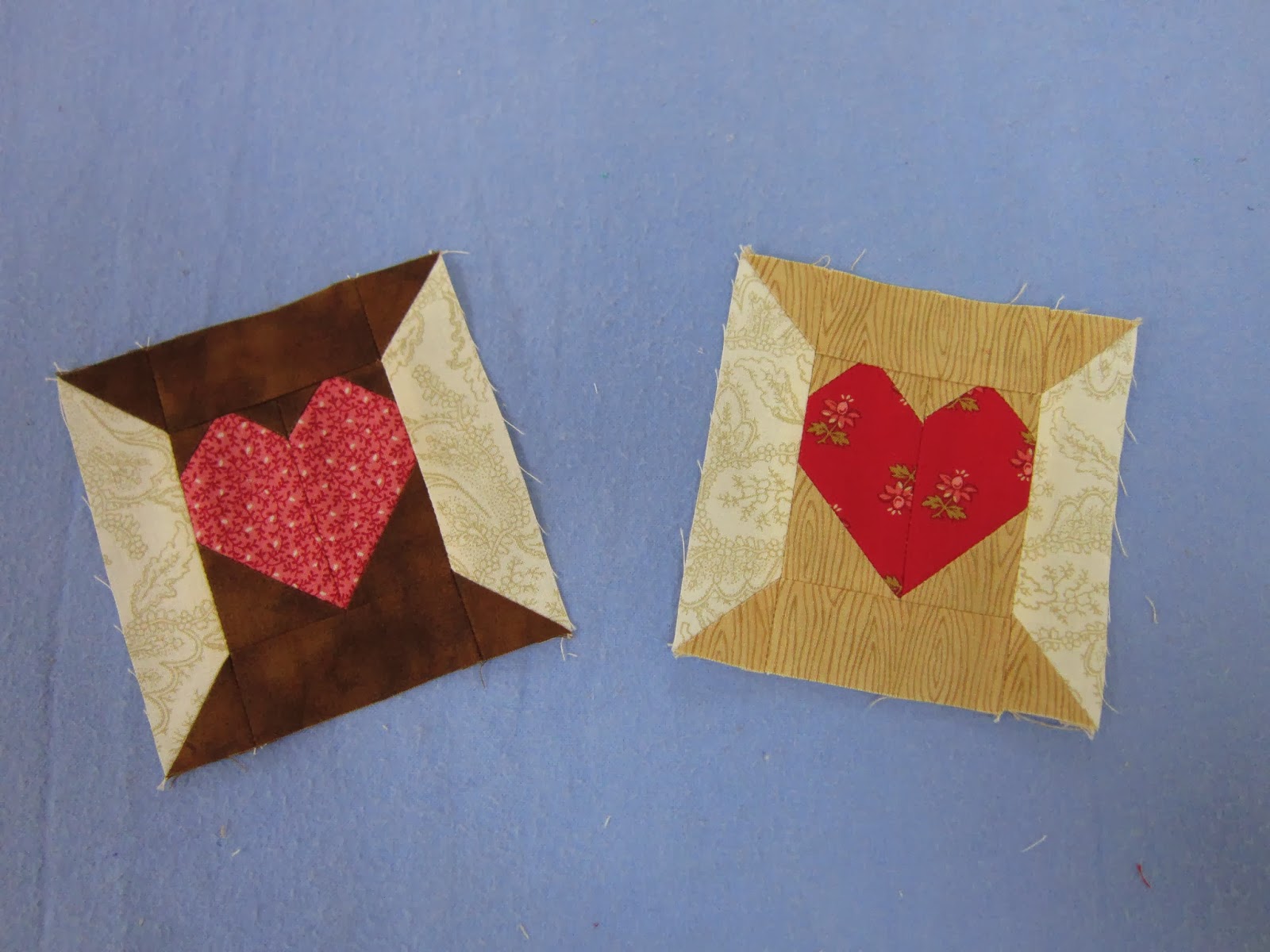 Our small quilt group's project this month was these adorable little spool blocks--with hearts in the middle! I thought they were so cute that I made two of them! 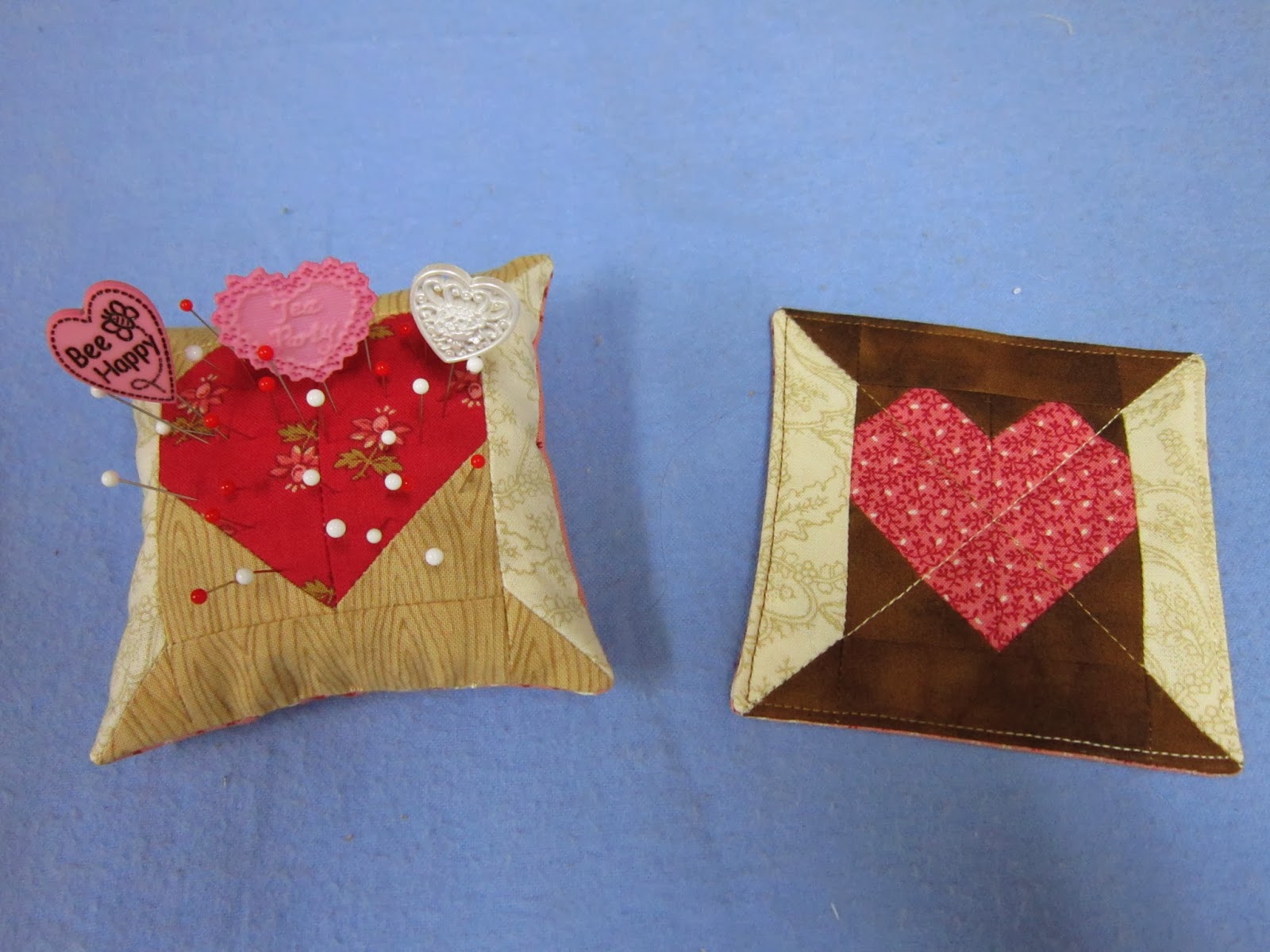 And then I made one into a pincushion and one into a coaster. For the pincushion, I used the walnut shell filling that everyone likes so much. I do like how easy it is to work with, but after using the pincushion for a while, I realized that I missed the "heft" of my other, sand-filled pincushions. So I think from now on, when/if I make any pincushions, I'll fill them with sand instead of walnut shells. 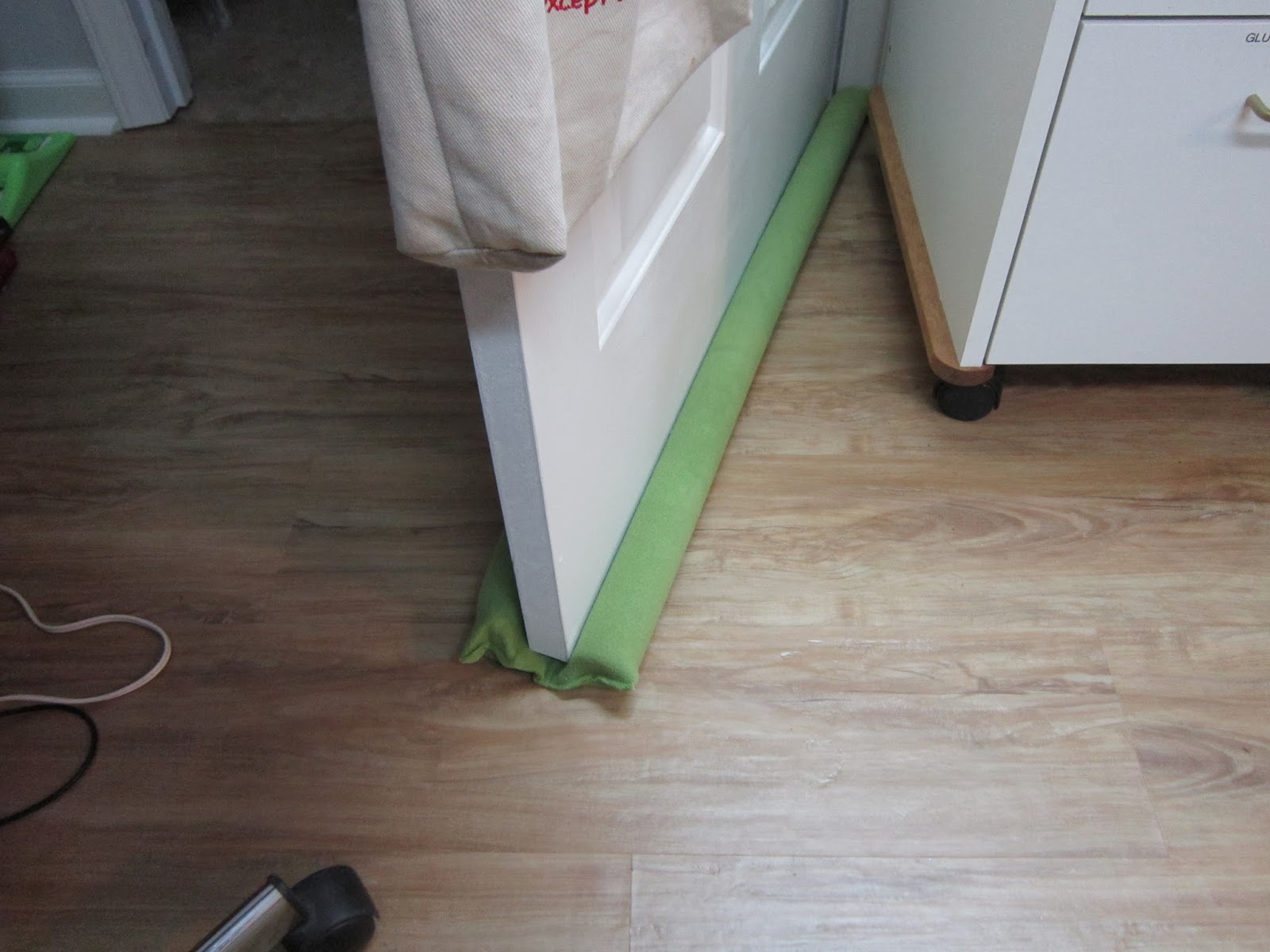 This winter has been particularly cold and I have four doors leading to/from my quilt studio. Two of them are very cold and drafty--the one leading outside and the one to the unfinished closet. I'd been piling a large piece of fleece in front of each of them to keep the cold air out, but that wasn't a good long-term solution. So this week I made my own draft stoppers. This one, for the closet door, has a piece of foam pipe insulation encased in fleece on either side of the door. That way, it not only insulates, but it actually stays ON the door when it's opened and closed. 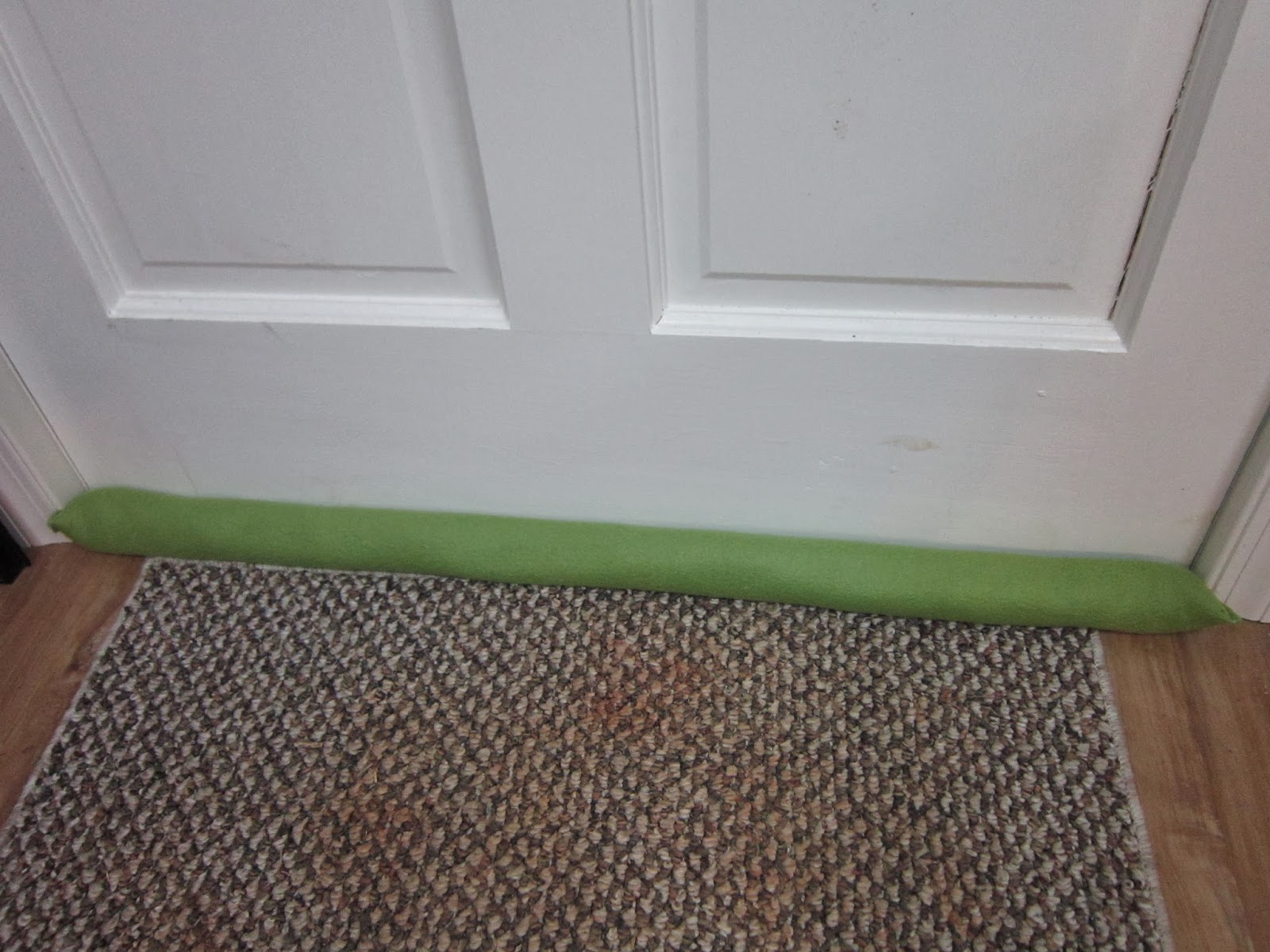 This one, in front of the exterior door, is also made of fleece, but it's filled with rice instead. This door really isn't used very often, but when it is, we'll have to move the draft stopper back into position once it's closed again. 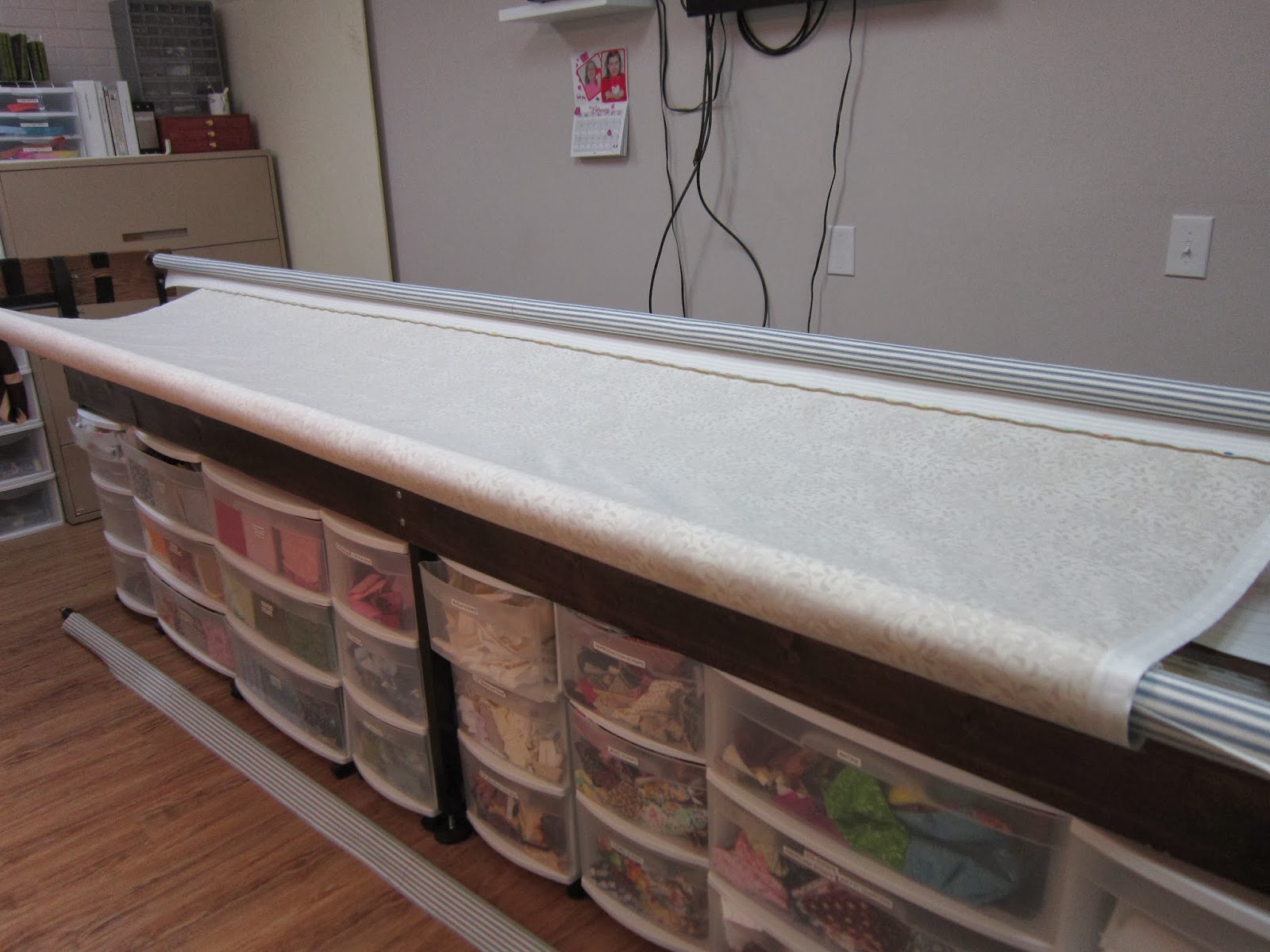 Last month I showed the brown chevron quilt top that I've been working on for my son and his wife. I finished assembling the top, which is essentially king-size, and realized I had no king-size batting. I really didn't want to piece the batting, so I just ordered a king-size batt and I'm waiting for it to be delivered. Meanwhile, I squared up the backing and got it loaded on my longarm frame. I'll be glad when this quilt is finished because then all my children will have at least ONE quilt I have made (most of them have several) and I can take a break from making large quilts for a while! 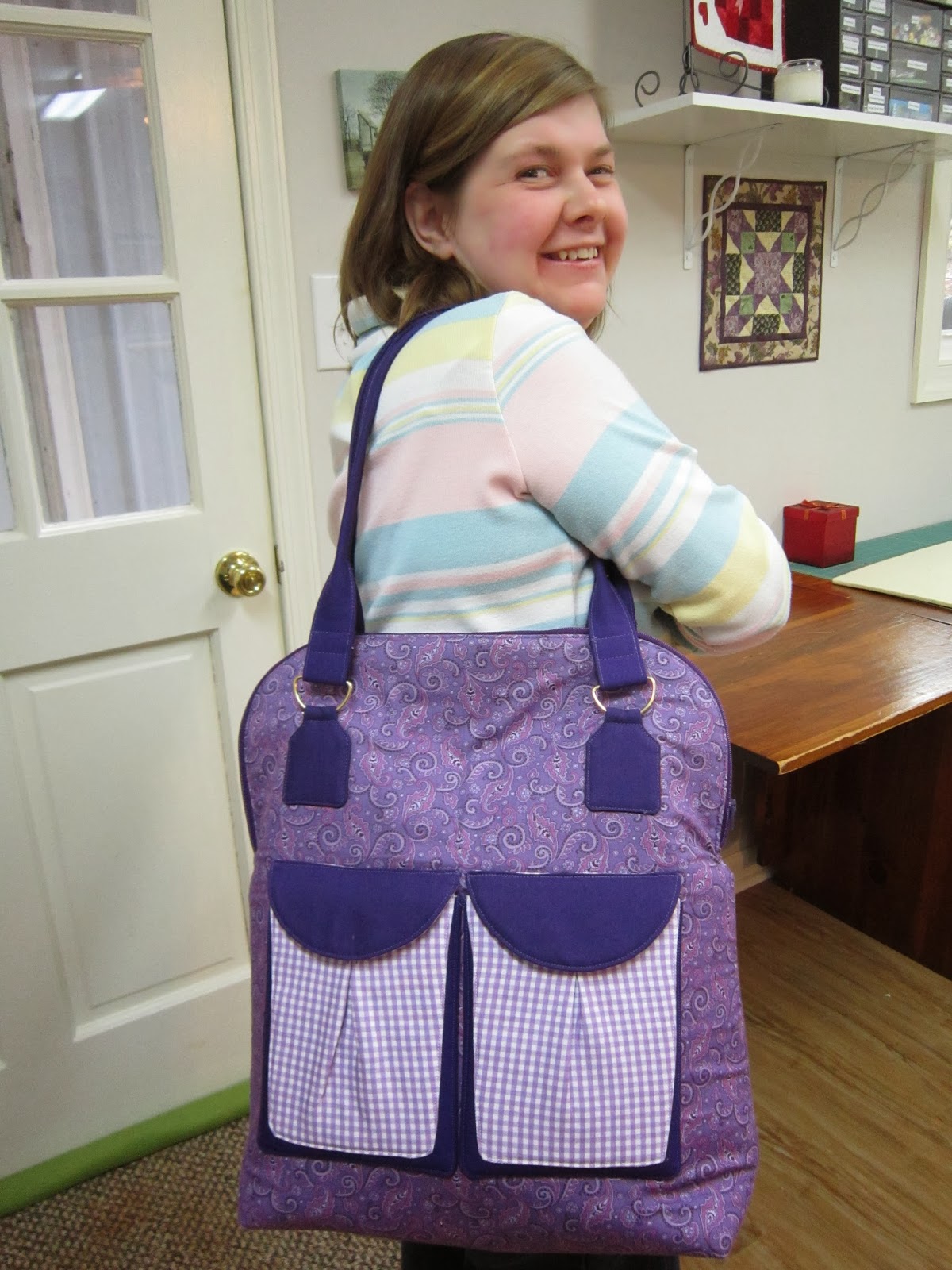 I'm participating in the Bag of the Month Club at Sara Lawson's blog. This is the January bag, which I didn't think I would really like that much until I made it. It's a great size for short trips since it holds a LOT and the handles really do a great job of supporting extra weight. I LOVE the bag for February and I'm excited to get it made (of course, it's already cut out!) One of my daughters suggested I make it out of a different fabric, but I'm using this same purple fabric! This is one of my favorite fabrics and I'll be really sad when I've used it all. And I told her that since the February bag is small and this one is large, they actually would work together really well as a matching set. So that's what I'm doing! 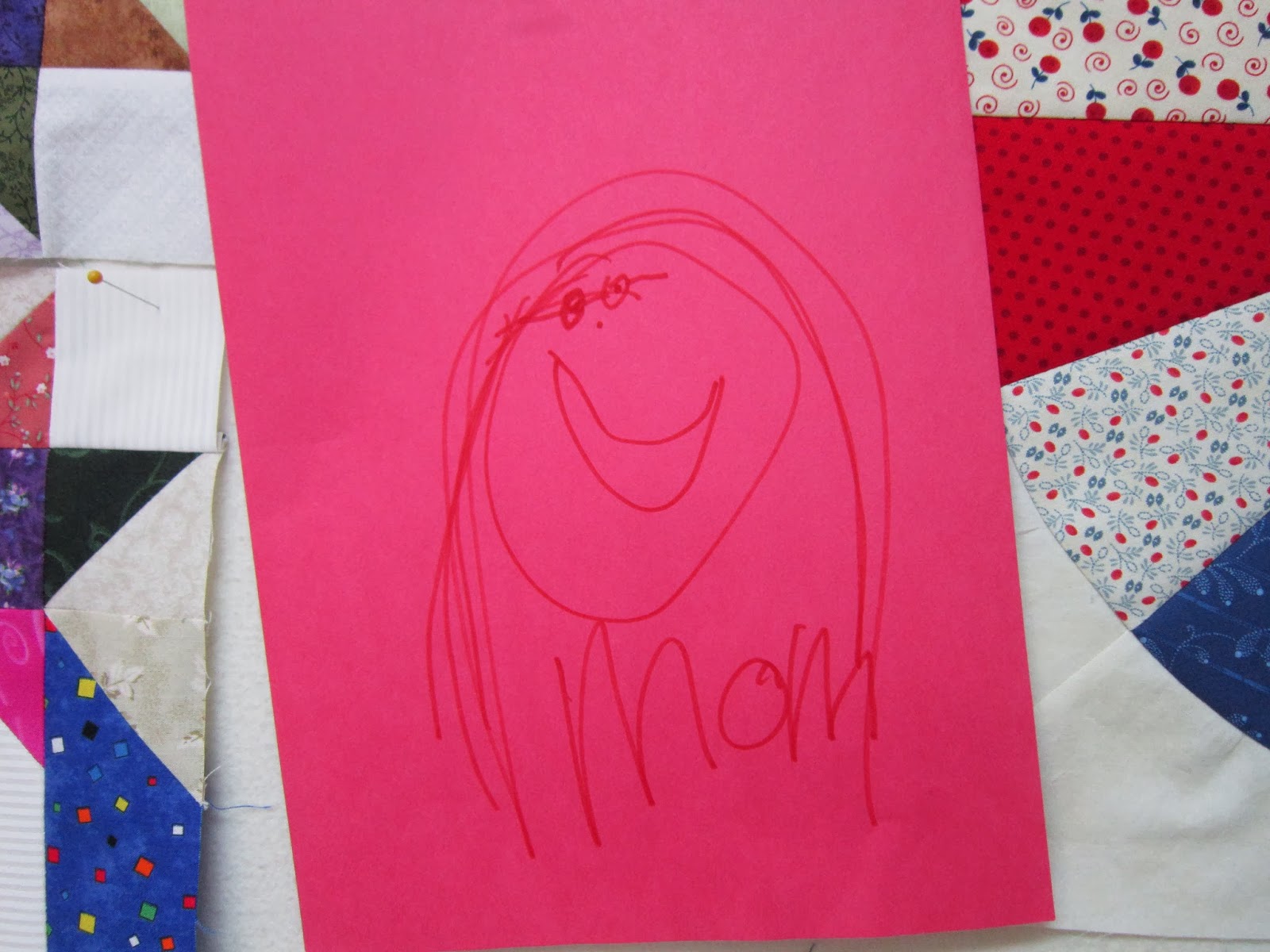 Next week is Valentines Day and Laura and I will be busy making Valentines tomorrow for family and friends. Meanwhile, she made this picture of me which I believe is meant to be MY Valentine!

Happy Valentines and good luck at Getting More Done...Everyday!
Posted by Gwen at 1:58 PM 1 comment: