...and the Mystery begins!

There's probably no other event on the internet that is as highly anticipated among quilters as Bonnie Hunter's yearly mystery. And I have to admit that this year I've been a part of that group. Friday was the day of the uncovering of the first clue and quilters all over the world are choosing, cutting and sewing fabrics for the Grand Illusion Mystery. 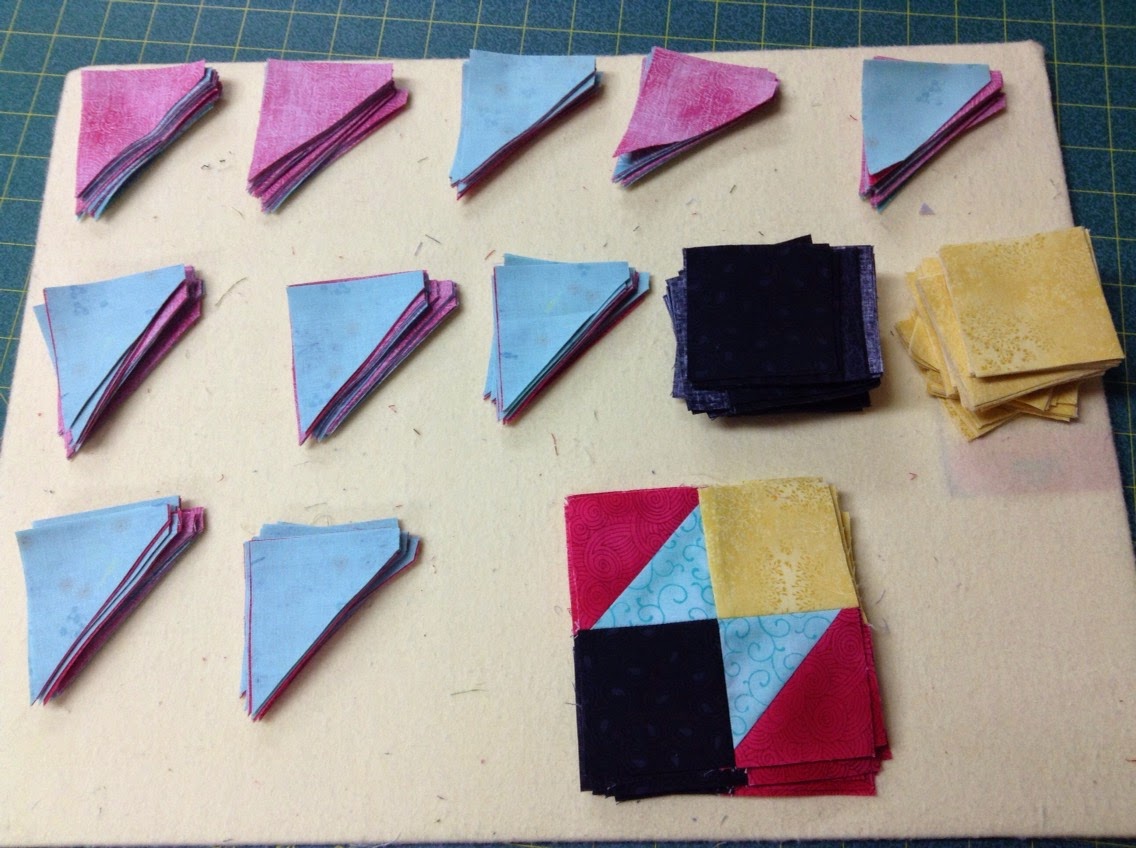 The colors Bonnie had selected were yellow, green, pink and teal/aqua with black and neutral added in. I don't normally collect much in the way of teal fabrics and most of the ones that I do have didn't really match her colors. Not that that's necessary, but it helps when you're more color-challenged, as I sometimes seem to be. Initially I thought I might substitute purple/lavender for the teal/aqua but when I saw the first clue, I quickly changed my mind--purple just wouldn't have contrasted nearly as well with the pink. So I pulled out what I did have and went to work, cutting and sewing. I've got all the pieces for the "broken dishes" blocks cut out and I've gotten 13 of them sewn, with 87 more to do!

A couple of years ago I bought an Accuquilt Go! cutter and I love it for specific purposes. I figured cutting out 280 triangles would be a great use for it, but I didn't have the right die. Thanks to Amazon, one is on its way and should be here tomorrow. In the meanwhile, I stacked my strips 4 high, right sides together and used the Easy Angle ruler to cut just over 200 triangles. I was pleasantly surprised at how quick and easy I was able to get them cut! However, I still need 80 more triangles and I figure the die will be good for that. And who knows how many more triangles I might need before this quilt is finished? 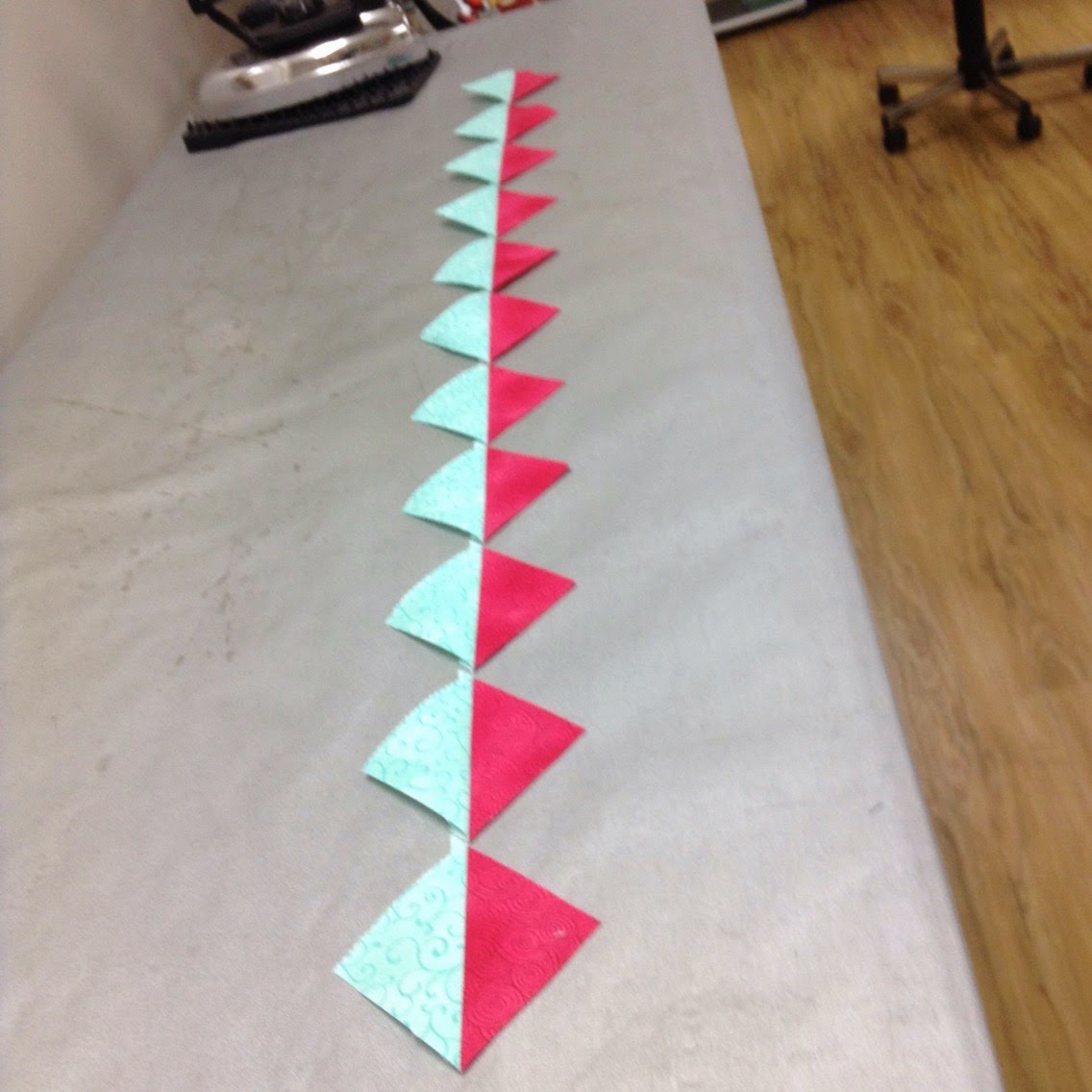 I read Bonnie's advice about only sewing the number of pieces at a time that will fit on the length of your ironing board. That serves several purposes: for one, you're getting up and moving more often so it's good for your health. If you're working on a leader/ender project, you get more of those pieces sewn. And finally, your sewn parts don't get all twisted and tangled together. I tried doing it that way and found that it worked really well. It's just a bit tricky to figure how many you need to sew before stopping to press. 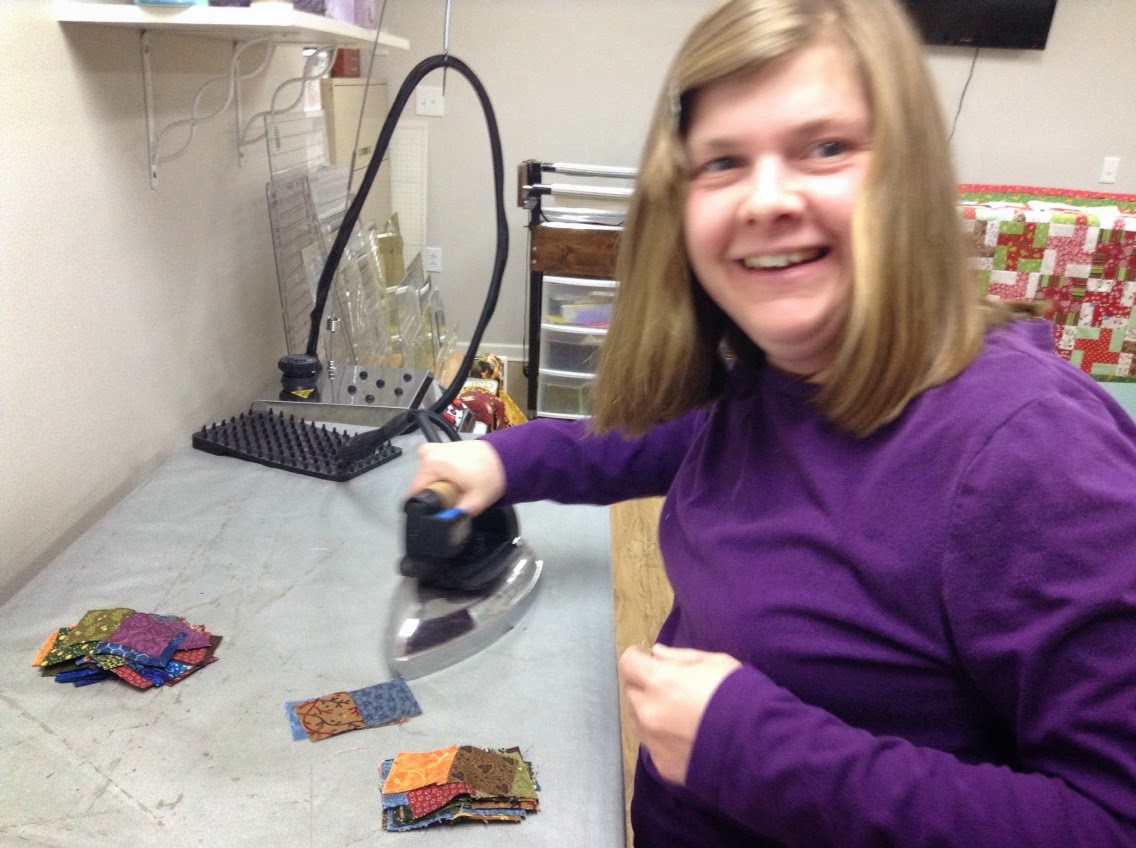 Laura wanted to press my mystery pieces for me, but she's a bit heavy and rough with the iron, so instead I gave her my leader/ender pieces to press. That worked for her and for me!

On another note, we had a very busy, happy Thanksgiving here with my mom and dad and all six of our children, 4 spouses and 8 of our grandchildren here. It was lots of fun, but Laura and I were both exhausted the day after Thanksgiving! In fact, she didn't even ask to sew that day, which is HIGHLY unusual. Instead she sat in the studio and played games on her Kindle. I was happy about that because it allowed me to sew uninterrupted for a few hours! 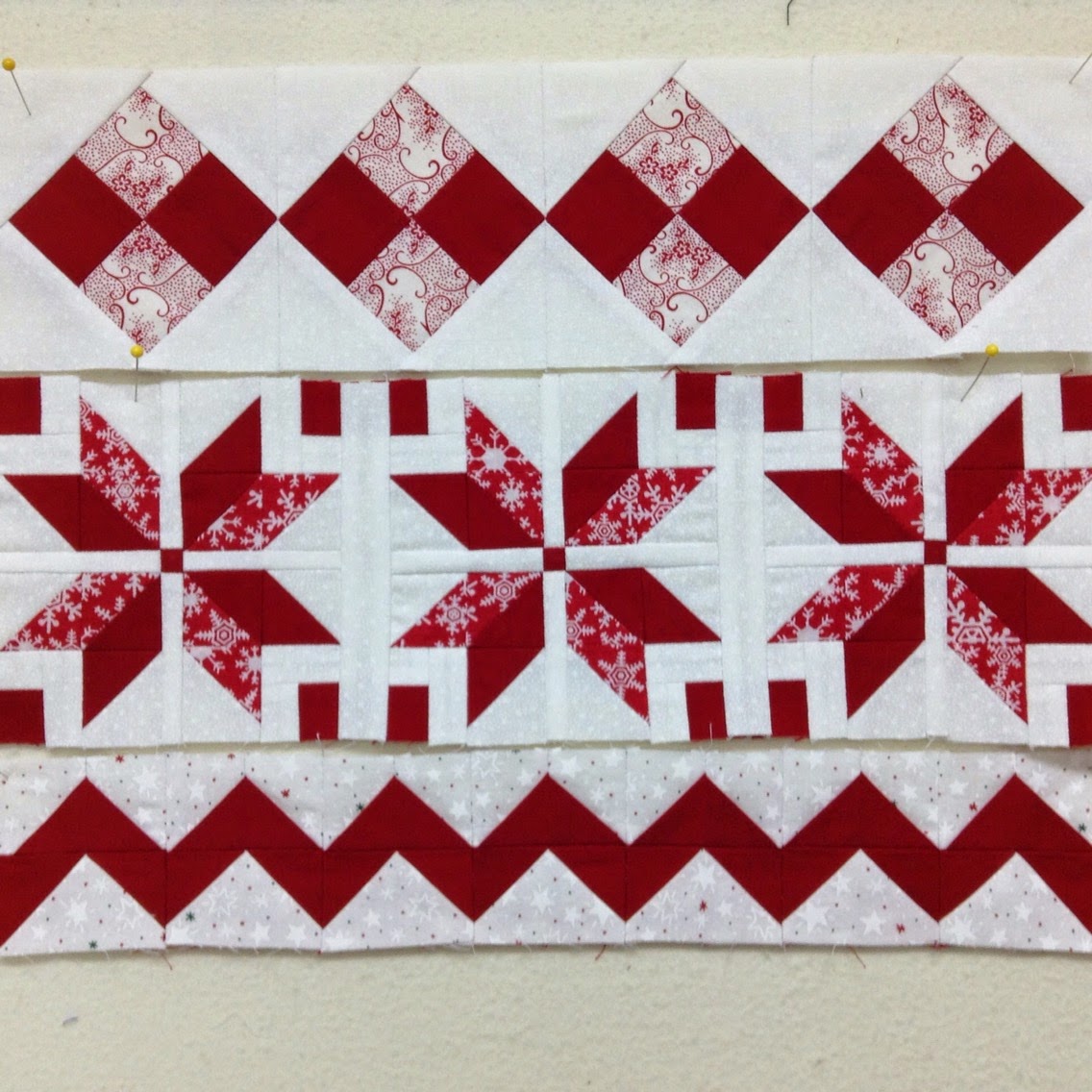 Julie Cefalu revealed two more rows for her Nordic Quilt-along and I got those done on Friday. I LOVE how it's turning out, although I've realized that I'm really short in red and white fabrics! Oh no--that must mean I need to do more shopping!

I'm a member of the Yahoo Stashbusters Group and someone on there suggested working specifically on busting their 30's fabrics. Several others chimed in that they wanted to be part of that sub-group and I thought that would be a good project for me to take on too. The "leaders" of the group thought it would be a good idea for each of us to take a picture and make an inventory of our 30's fabrics before we begin. I had a drawer of 30's fabrics and several larger pieces in with my regular stash. I didn't really think it was that much fabric until I began measuring. OH MY GOODNESS!! By the time I was done, I discovered that I have about 45 yards of just 30's fabrics! I was totally shocked!! And about half of that is in fat quarters! Needless to say, I'm going to have to get really busy to see those numbers go down! So now I'm in the process of looking for specific projects that will use up fabric quickly. And I have a feeling that Laura is going to be busy helping me--she'll be thrilled!

And now it appears that even more than ever, I need to "GET MORE DONE!"

Missing in Posts...but not in ACTION!

It's been a LONG time since I've written a blog post and lately I've been thinking that I should get back into doing that on a somewhat more regular basis. So we'll see what happens with that idea!

Anyway...I've been busy sewing, and so has Laura. In fact, I think her quilting has become an addiction (as my daughter told me--"Where do you think she got THAT from?!") My great challenge has been to keep her busy enough with sewing that I can work on some of my own projects, in between cutting and pinning for her!

I have to tell a rather funny story about Laura--although it wasn't so funny at the time. One day we were sewing and I needed to leave to go to my piano lesson. I left Laura sewing at her machine in the studio while I was gone. What was I thinking?! When I came home almost 2 hours later, she was STILL down there. So I snuck downstairs and peeked in at her to see what she was doing.

Well, it appeared that she must have gotten her sewing machine jammed and I wasn't there to fix it, so she decided to fix it herself! For some reason she had gotten out the machine manual (maybe she thought it had some machine un-jamming photos? She can't really read afterall!) But in addition, she had found the tools I use for really bad jams (screwdrivers, tweezers, etc.) and had pretty much disassembled her machine. I might have been able to put it all back together, except that in her attempts at repair, she had dislodged a couple of springs and I didn't know where they went. So we took the machine to the shop to have it repaired and about $90 later, Laura was ready to sew again. However...before I let her touch her machine, I took lots of photos of its interior and even made a video showing where the springs were and how they were connected...JUST in case!

I do have to admit that Laura's sewing has greatly improved over the months as she's gotten more and more experience. In October we went to a quilt shop and she saw a Halloween panel that she had to have. Initially, I thought I had another project to work on, but then it occurred to me that Laura could make her own project. And that she did! 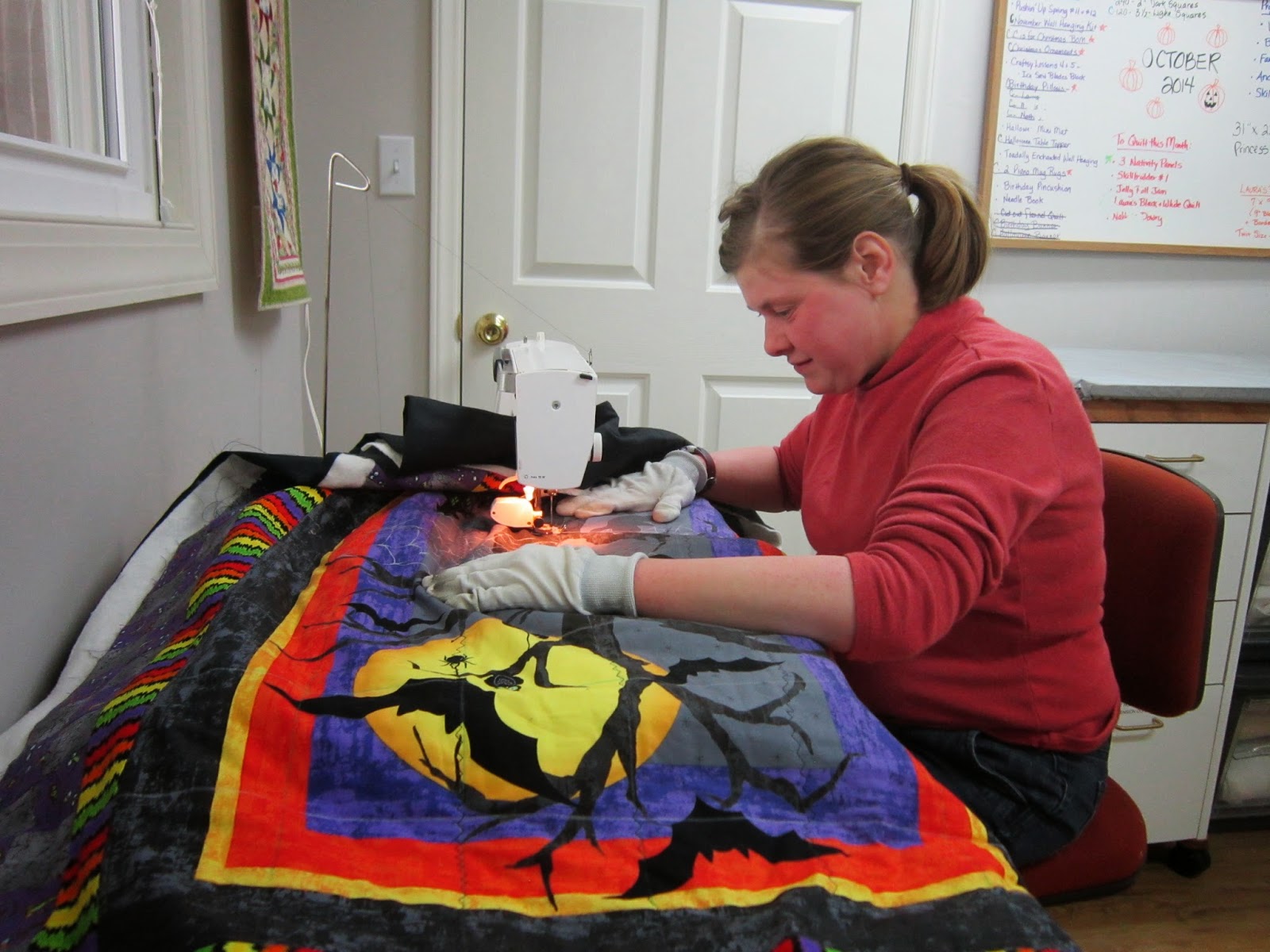 I had her make a bunch of 4-patches and add those as a border, along with just a regular border. Again, I thought I would have to quilt it, but again, realized that with help Laura could quilt it herself. I drew lines in a grid over the whole wall hanging and had Laura do a multi-step zigzag with her walking foot--that's what she's doing in the photo above. The zigzags are really irregular, but they kind of add to the spooky house feeling!

Finally--the binding. I had Laura sew the binding, and then stop just before the corners. I sewed the corners and then she kept going until the next one. I also had her hand sew the binding to the back. The only problem with that is that Laura doesn't know how to knot thread and I haven't been able to figure out a way to teach her. So I knotted a bunch of pieces of thread for her and then kept the scissors away from her as she sewed (so she wouldn't just cut off her thread when she got to the end) and then I would tie off each piece of thread for her. She was so proud of herself and her creation! And so was I! 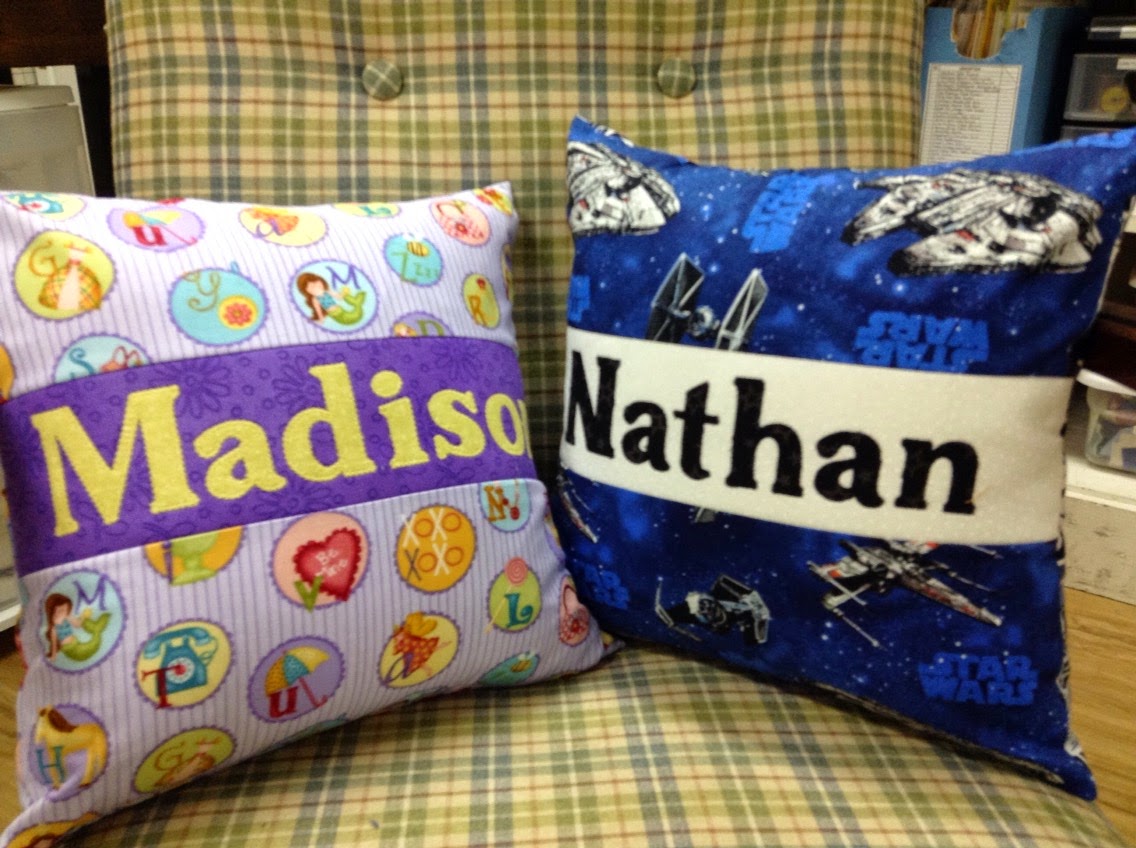 In between Laura's projects, I've been able to do a few of my own. I finished up birthday pillows for all 12 grandchildren and made one for Laura too. My daughters-in-law are still coming over on Tuesdays to sew. We've continued working on the Shabby Fabrics monthly wall hangings and I've completed all of them except December's and it will be finished this week. 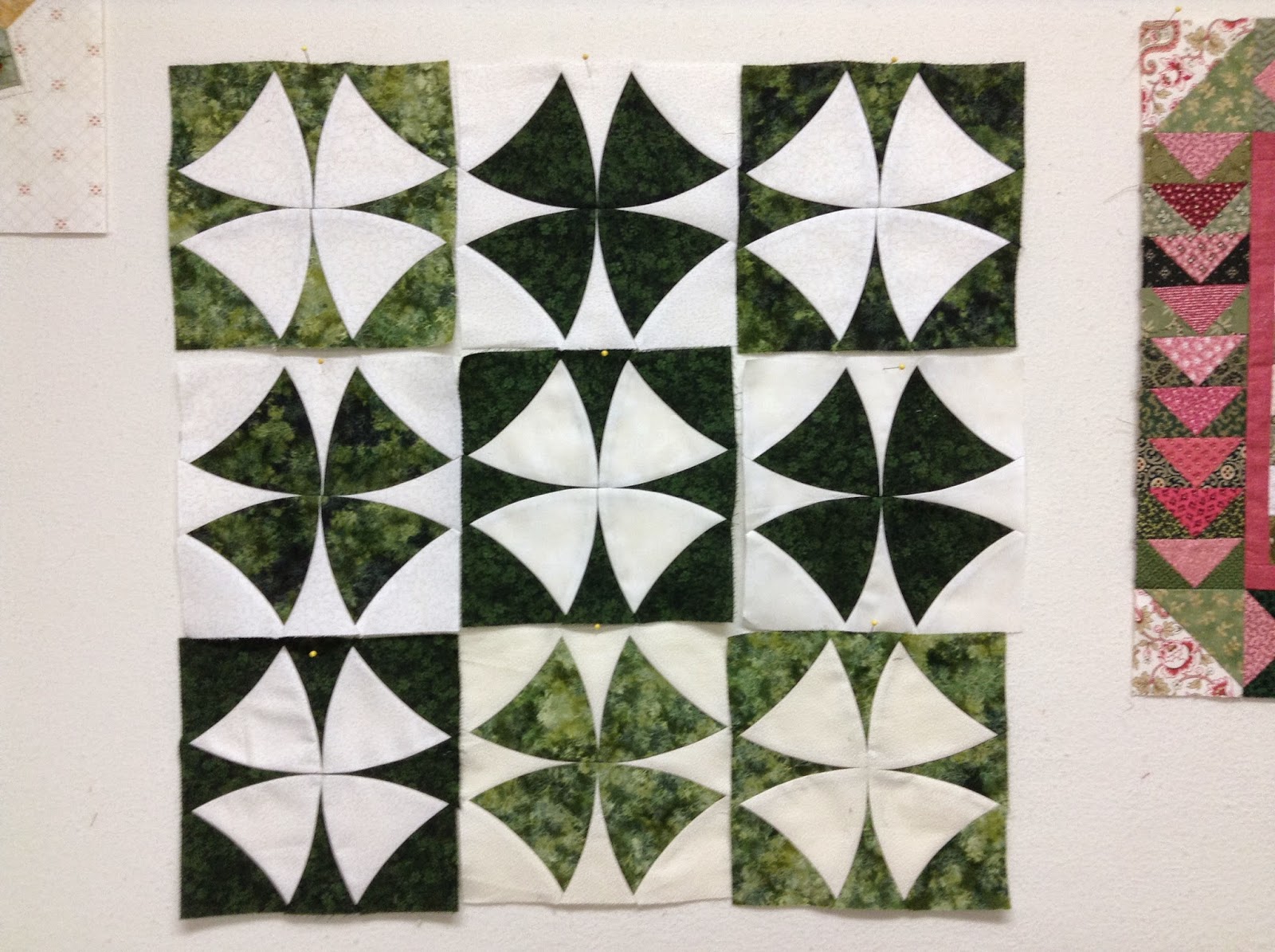 I've been working on the Craftsy class, "Playing with Curves" and I've gotten 2 of the projects completed. 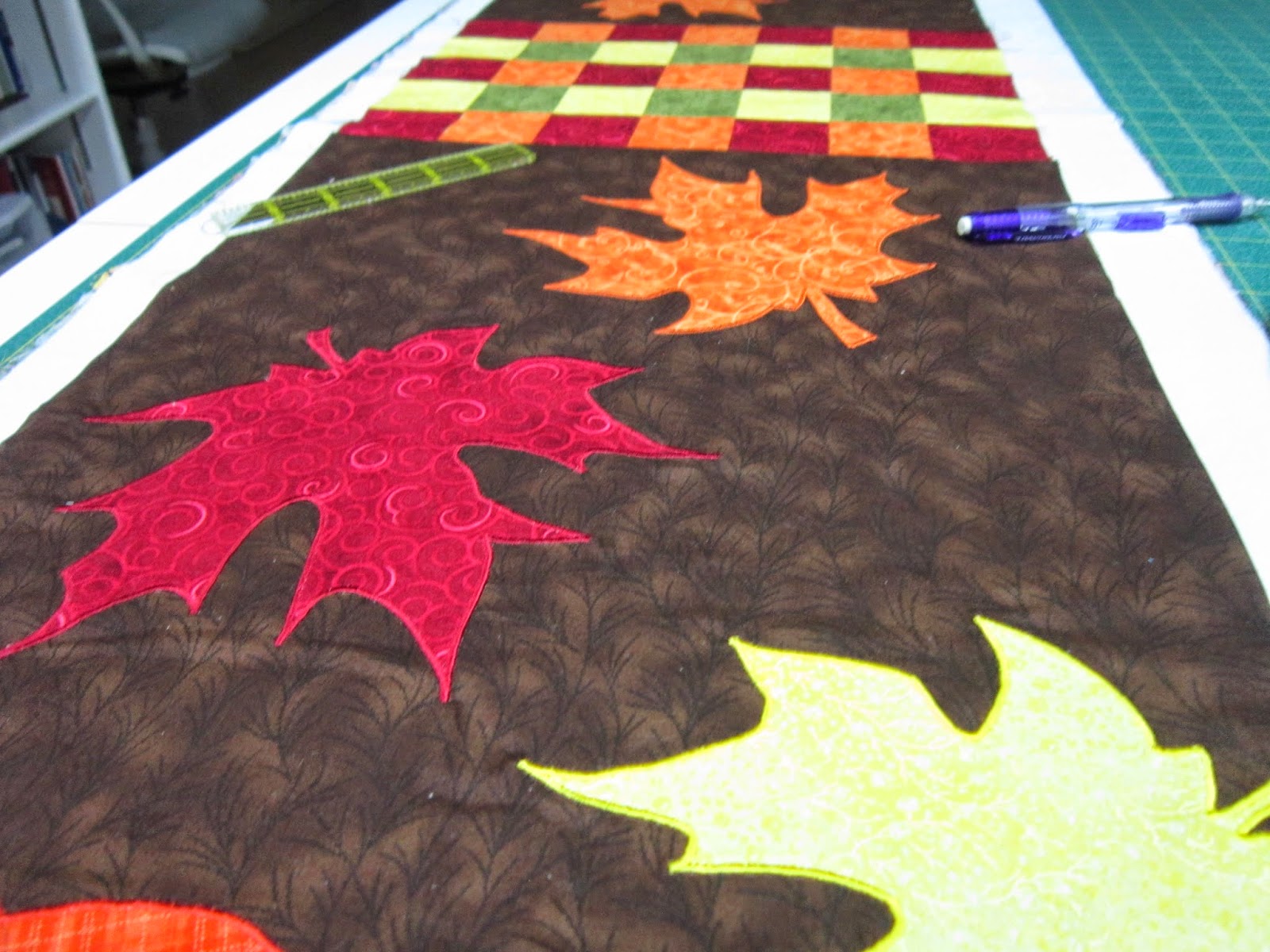 I've made several bags/purses/totes and finished up projects I had started last year, particularly some fall projects. But I also started some new projects I fell in love with, like this beautiful table runner. I haven't done much in the way of actual quilts this year, although I have a couple in the works that I'll blog about at another time. And I'm all excited about Bonnie Hunter's mystery that starts next week on November 28th--the "Grand Illusion" Mystery. I've only done one of her mysteries, "Easy Street" and I'm looking forward to making another one. 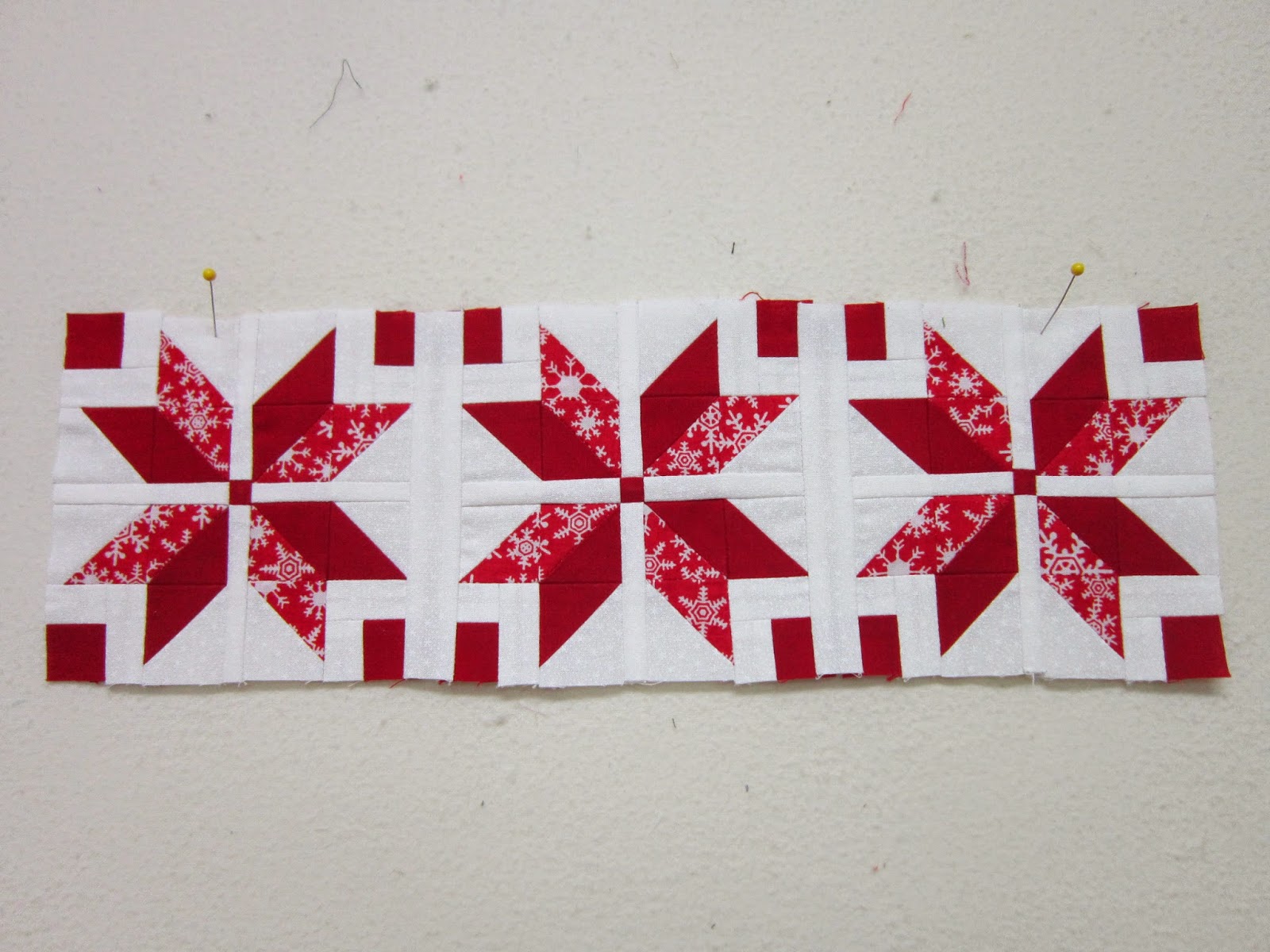 Right now, of course,  Laura and I are both working on Christmas projects and one of them is the Nordic Mini Quilt-along that Julie Cefalu is offering on her blog. I fell in love with these blocks when I saw them and had to jump in. This is going to be a TINY quilt--these blocks are less than 5 inches each! 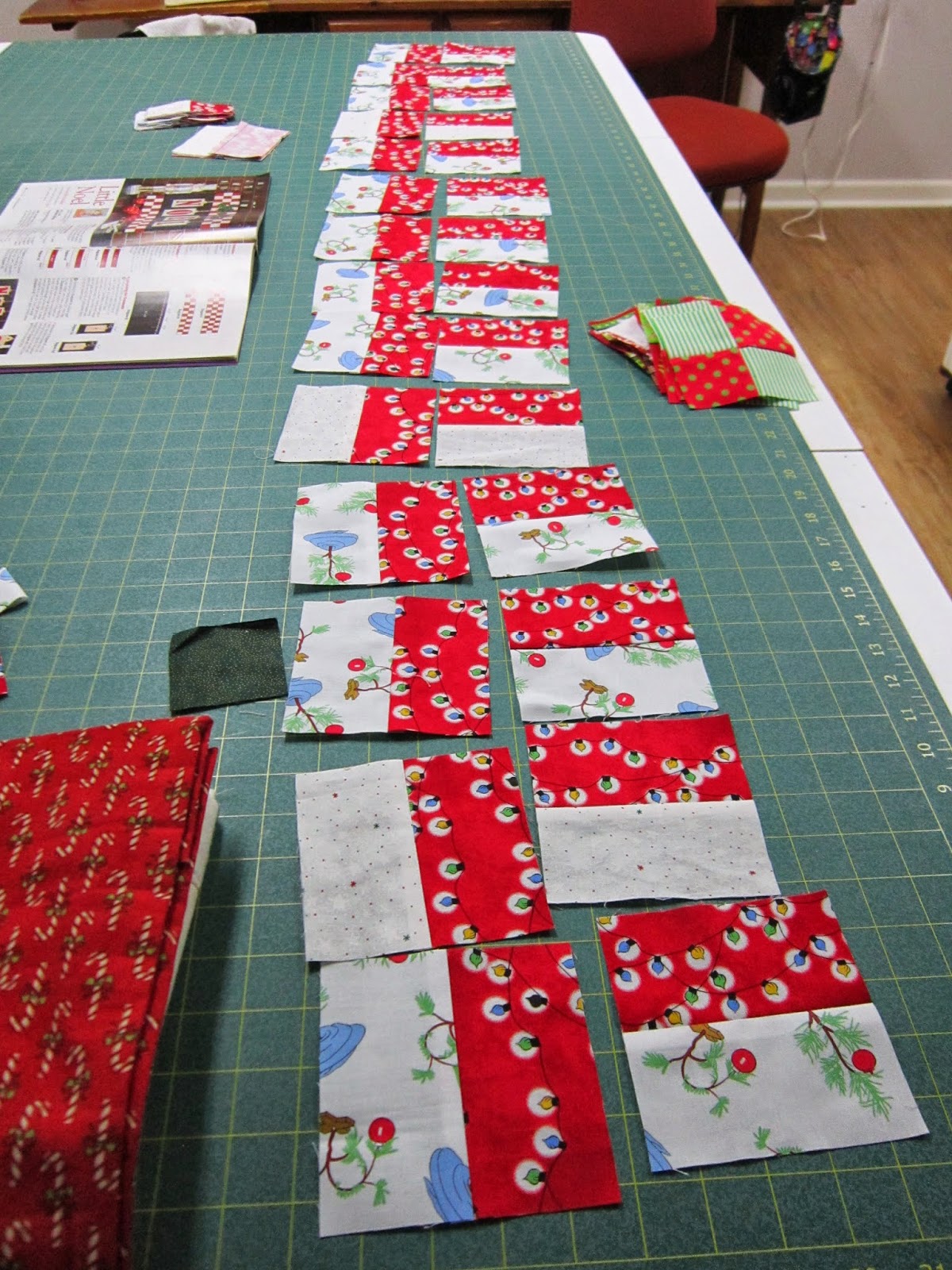 Laura has been assembling the quilt in the very top picture of this post. Here is where she laid out the cut sections for me to pin together. Her quilt will be sort of a tree skirt for our extended family Christmas tree. And her leftover pieces will be things such as table toppers, hot pads, coasters, etc. I'm going to have her make as much of her projects herself as she can. 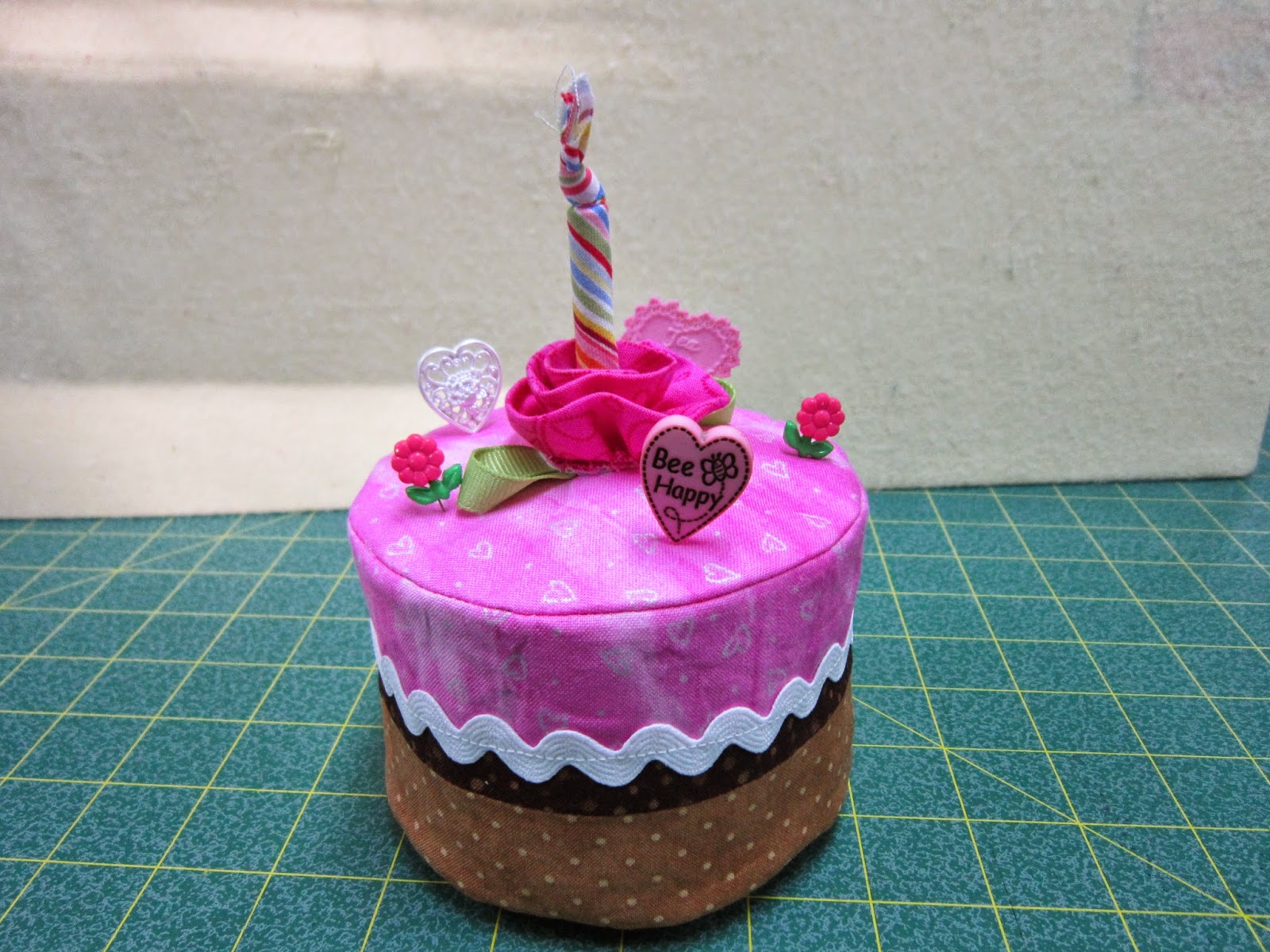 Last, but not least, Laura's birthday is in a couple of weeks (December 4th) and she is so excited! Her birthday is her very favorite holiday and she looks forward to it for most of the year. I've been working on various projects for her, one of which is this darling birthday cake pincushion. I've had the pattern for some years and have always wanted to make it for her, so this year I finally did.

Well, this blog post has gone on long enough, but I guess I had a little catching up to do! I'll try to repent and do better in the future. In the meanwhile, I hope to get more done...everyday!
Posted by Gwen at 2:45 PM 4 comments: