Gifts in the Mail, Pianos and Dolls

My birthday was this past weekend and I usually don't get gifts from anyone, so I was really surprised when a package came for me in the mail. Even more surprising was the fact that the return address showed that it was from a very dear friend of mine who I haven't seen in some years! When I saw what was in it, I quickly sealed the package back up until Laura came home. She was visiting at her sister's and she's the "official package opener" around here. Normally, however, the packages don't contain anything for her--but THIS one was different! 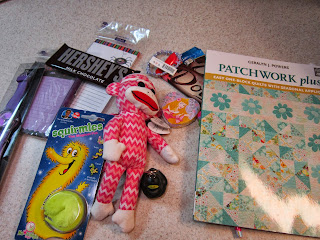 Kim had discovered my blog and my love of quilting. Her sister-in-law, Geralyn Powers has written and published a quilt book (Patchwork Plus) and Kim sent me a copy. I LOVE the book--it has a combination of both patchwork and applique and the projects in the book are just wonderful! I'm looking forward to making some of them. But look at what else Kim included--lots of little goodies for Laura! 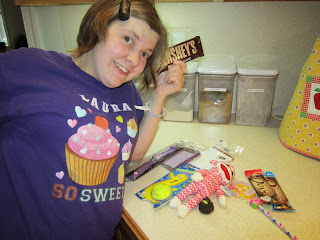 Actually, I think the chocolate was meant for me and Charles, but you notice that that was the first thing Laura grabbed! We DID share with her! 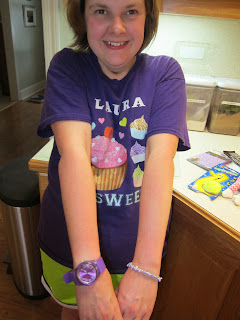 And how did Kim know?! Laura has a real thing for watches, so that was her second choice among all the goodies! That and the bracelet even match her shirt! We've had lots of fun playing with and exploring all the fun little things--it was the best birthday surprise EVER!!

On a different note, but still birthday related: Last year I decided that I wanted to get serious and learn how to really play the piano well, so even though I knew the basics, I began taking lessons. I've been carrying my various music books back and forth to my teacher's house each week in a canvas tote, but quilter and bagmaker that I am, I knew I had to have/make something with a little more class.

Then  months ago I discovered this paper-pieced piano by Soma Acharya of Whims and Fancies and just fell in love with it. I decided that I would make my own version of the pattern and incorporate it into a tote bag for piano. As time marched on, I knew I needed a deadline to get me moving on this project. So I decided that I would make myself a piano tote bag for my birthday...

I looked the pattern over carefully and realized that I could easily divide it into 4 major sections. In September, I put together one section each week. That actually ended up being a good plan because I think I would have gotten totally burned out on paper piecing if I'd tried doing it more quickly. I also didn't want to get tired and sloppy by doing too much at a time and that part of my plan worked very well--by the end of September I had a completed paper-pieced piano! 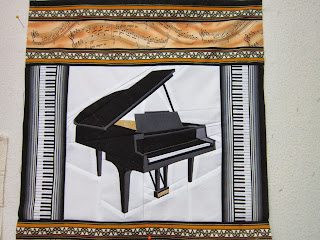 The next challenge was to incorporate my block into a bag. I had been collecting various music and piano themed fabrics for a while and I carefully cut some of them up and sewed them as borders to my block. And then the whole thing sat on my design wall for a couple of weeks. Meanwhile, I was scheming and planning how I might make this into a bag and not make a complete flop of it. 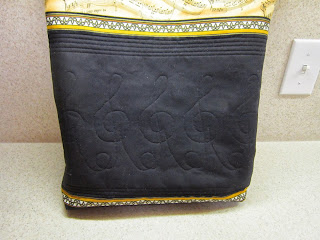 Last week, I decided it was time to get busy and started putting things together. I thought the front was pretty good as it was, but I needed to do something for the back of the bag. I decided to continue the top and bottom borders around the bag to the back and then just use plain black fabric between them, since the emphasis was meant to be on the piano on the front. However, I found I had a treble clef stencil, so I quilted a few of those onto the back, along with a few lines. 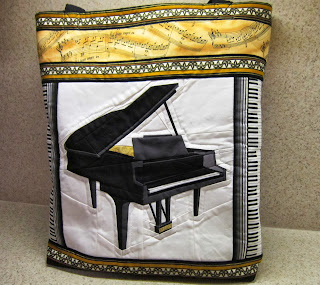 On the front, I just quilted a 1/4-inch outline around the piano and left it like that. I added two thickly-padded handles and boxed the bottom. 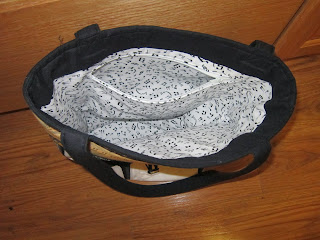 I left the top of the bag open, but I did add a zippered pocket in the lining to hold my wallet and a few essentials. The lining is another music print I had found. The whole bag is quite sturdy and holds my books perfectly--I LOVE how it turned out! Happy Birthday to Me!!

This weekend Laura and I went to a quilt shop with my mom and discovered some fabric panels printed with clothing patterns for American Girl-sized dolls. Laura has one of those dolls and even though she doesn't actually play with it, she does like to change her clothes occasionally. Needless to say, we left the store with a couple of panels. I was afraid Laura might think she could sew them herself, so I bought a back-up set in case they ended up getting ruined. Fortunately, she let me sew them while she "supervised!" 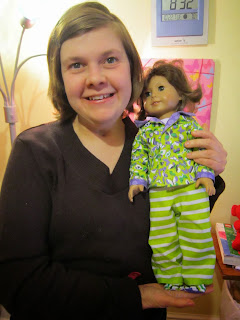 The little slippers were the most challenging part to make, mostly because they were so small. I goofed on the second one, which Laura wasn't too happy about, but I wasn't about to take it apart and re-sew it! 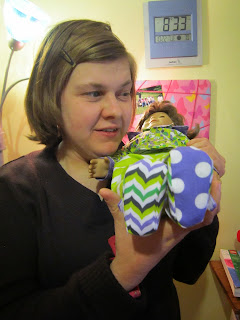 We have one other set of doll clothes to make, which I've actually hidden from Laura for now. I bought fabric that matches it and I plan to make the doll and Laura matching pajamas for Christmas. She'll be just thrilled!

It's rather late, so there won't be any more done today, but we'll definitely Get More Done...tomorrow!
Posted by Gwen at 6:47 PM