Catching Up and UFOs

It's been a few weeks since I've written a blog post, mainly because I've been revamping my schedule and trying to find the best time to sit down and write. Hopefully this schedule will work and I'll be back to posting regularly. 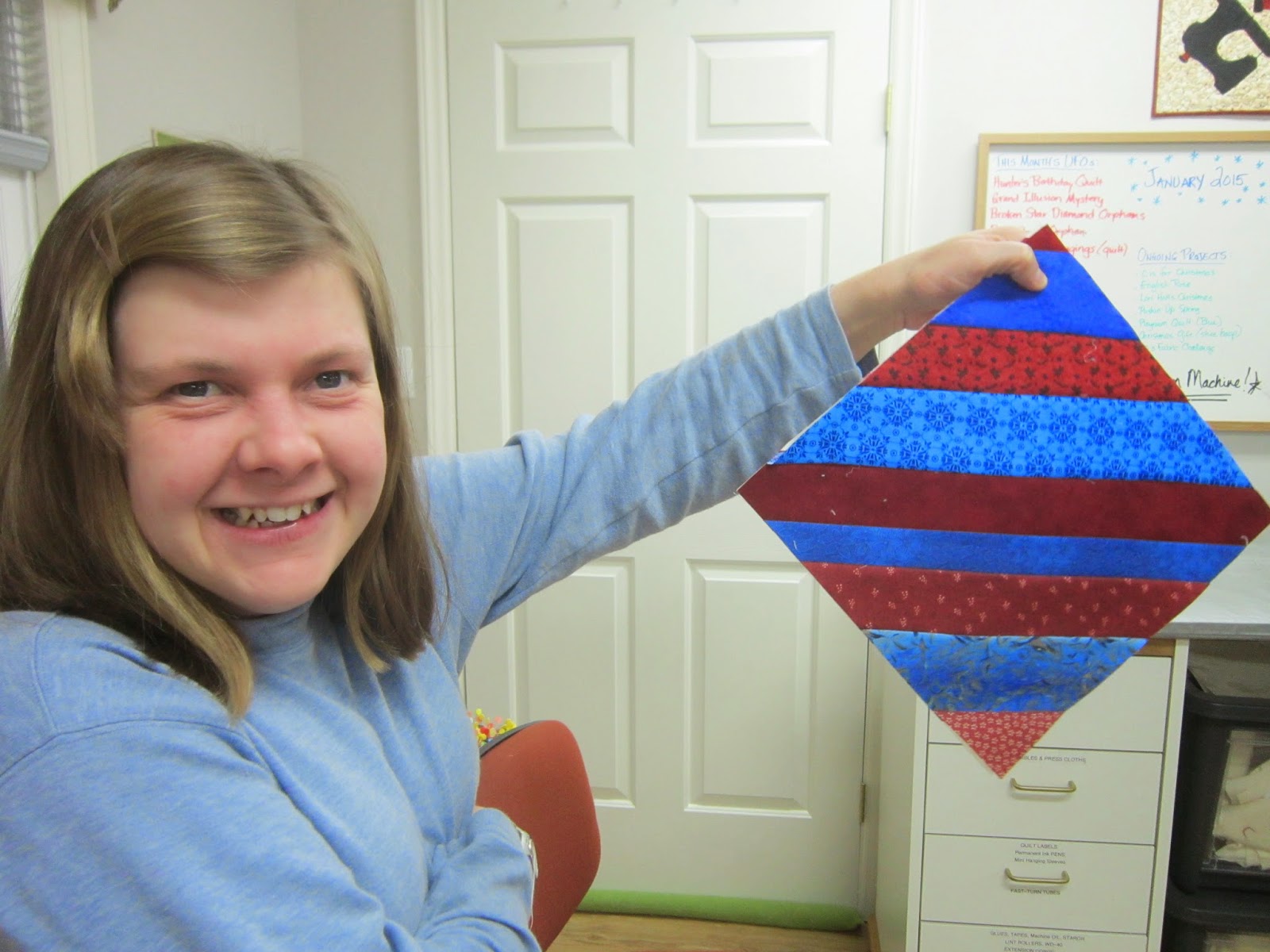 I joined Stashbusters' sister group, Heartstrings, thinking that Laura could easily make string blocks and then we could make them into quilts and donate them. Unfortunately, because of sewing to a foundation, she can't use the magnetic seam guide that helps her sew more accurate seams. So some of her seams were just right, but many others were way too wide or too narrow. Of course, as long as they're holding the fabric together, it really doesn't matter since they become hidden under the foundation! We made a couple of string blocks together and Laura made a couple on her own, but then, for some reason, she lost interest. I think she'll want to do more in the future, probably sewing a few in between in other projects, so I've got some foundations and strips ready and waiting for her. 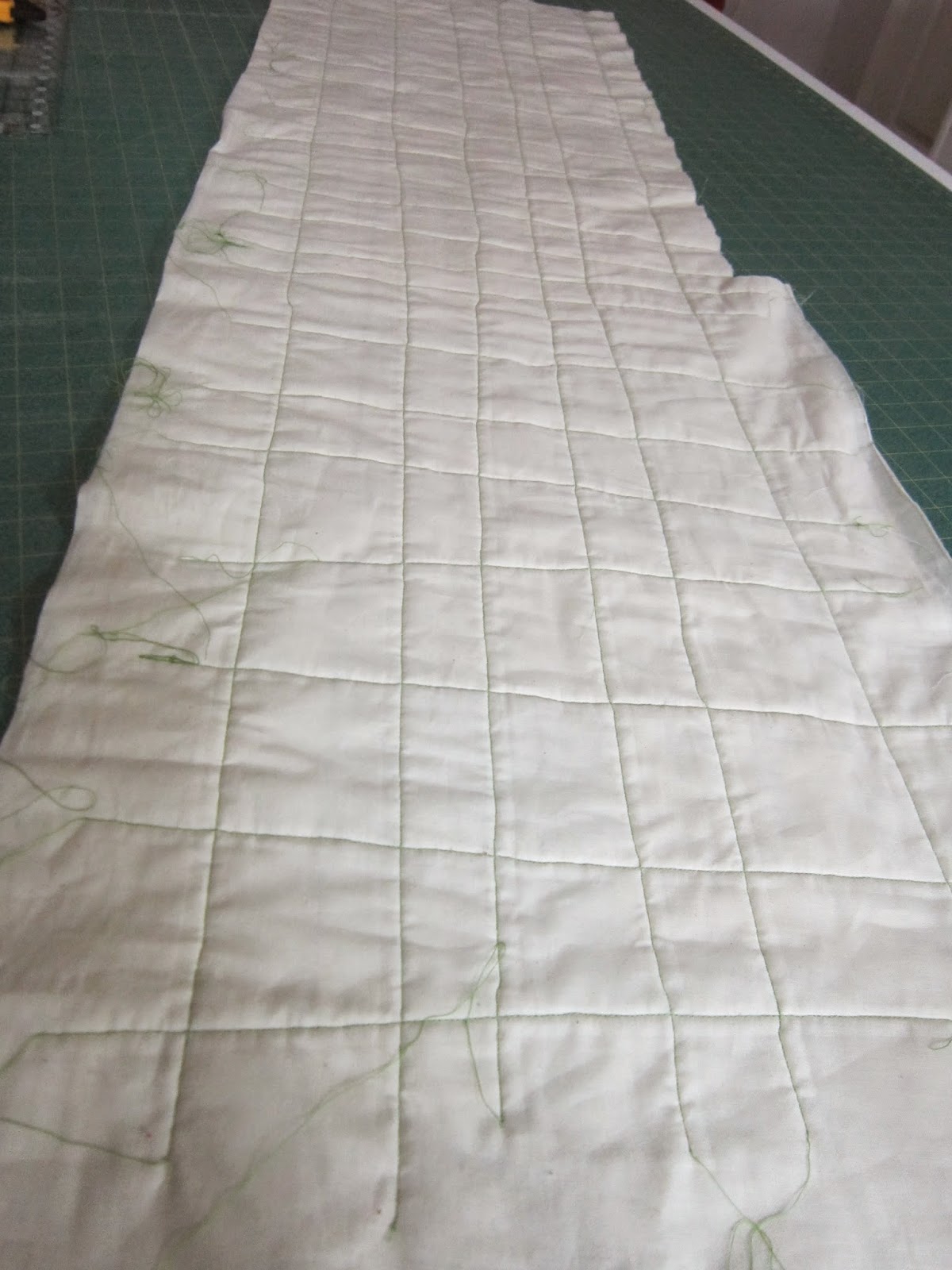 One of my major goals for this year is finishing up 4 UFOs a month or 48 UFOs for the year. Laura's UFOs are on my list too and she has several table runners that she needs to complete. This is the back of a table runner she decided to mark and quilt on her own! I usually mark diagonal lines for her to quilt, but she got out the ruler and marking pens and drew straight lines going the length of the runner. Then she used the walking foot on her machine and quilted it. I was impressed with how well it turned out! In fact, the lines going across weren't even marked--she just stitched them totally freehand! 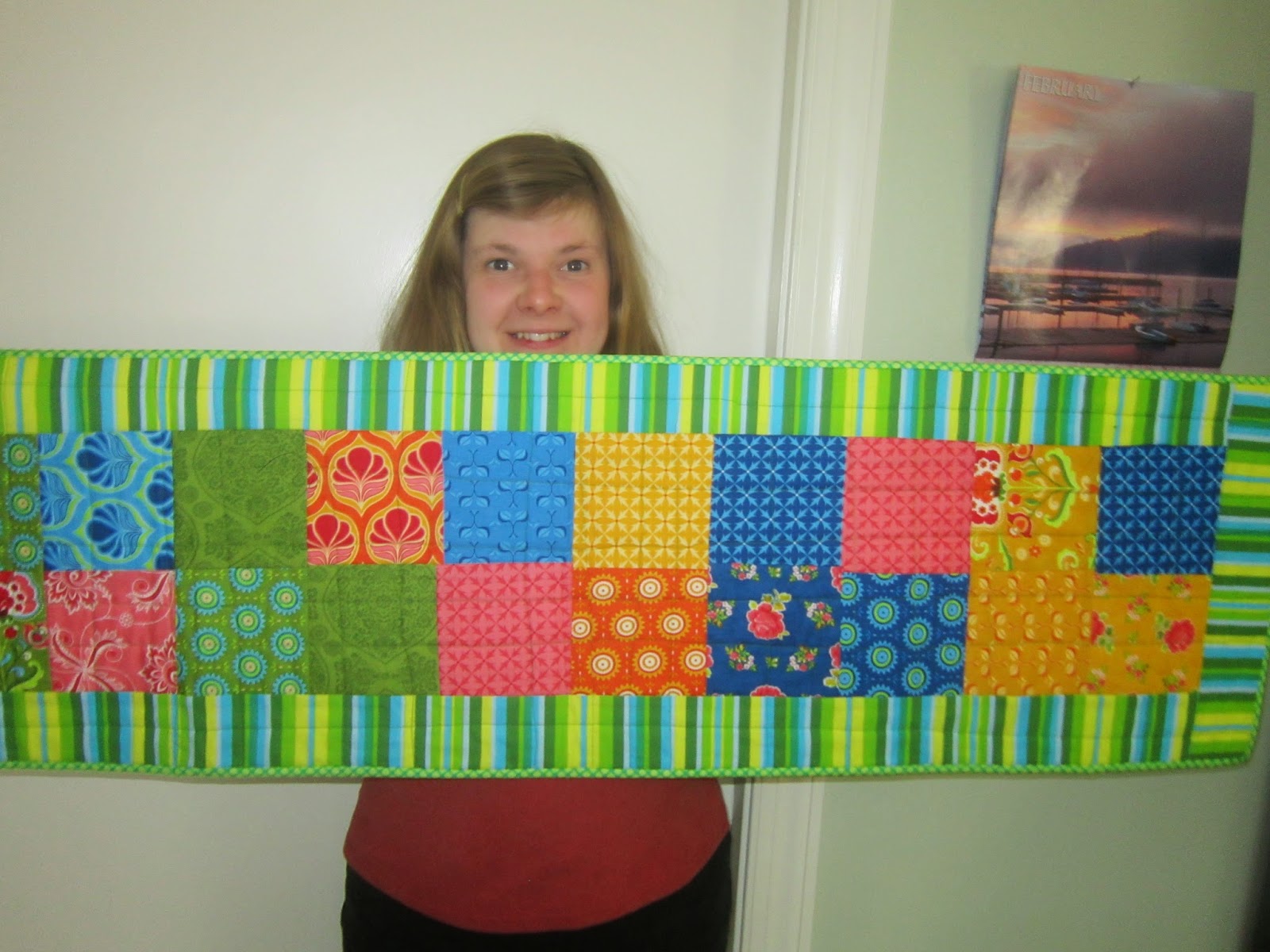 Here is she is with the finished runner. I machine stitched the binding and then she hand-sewed it to the back. 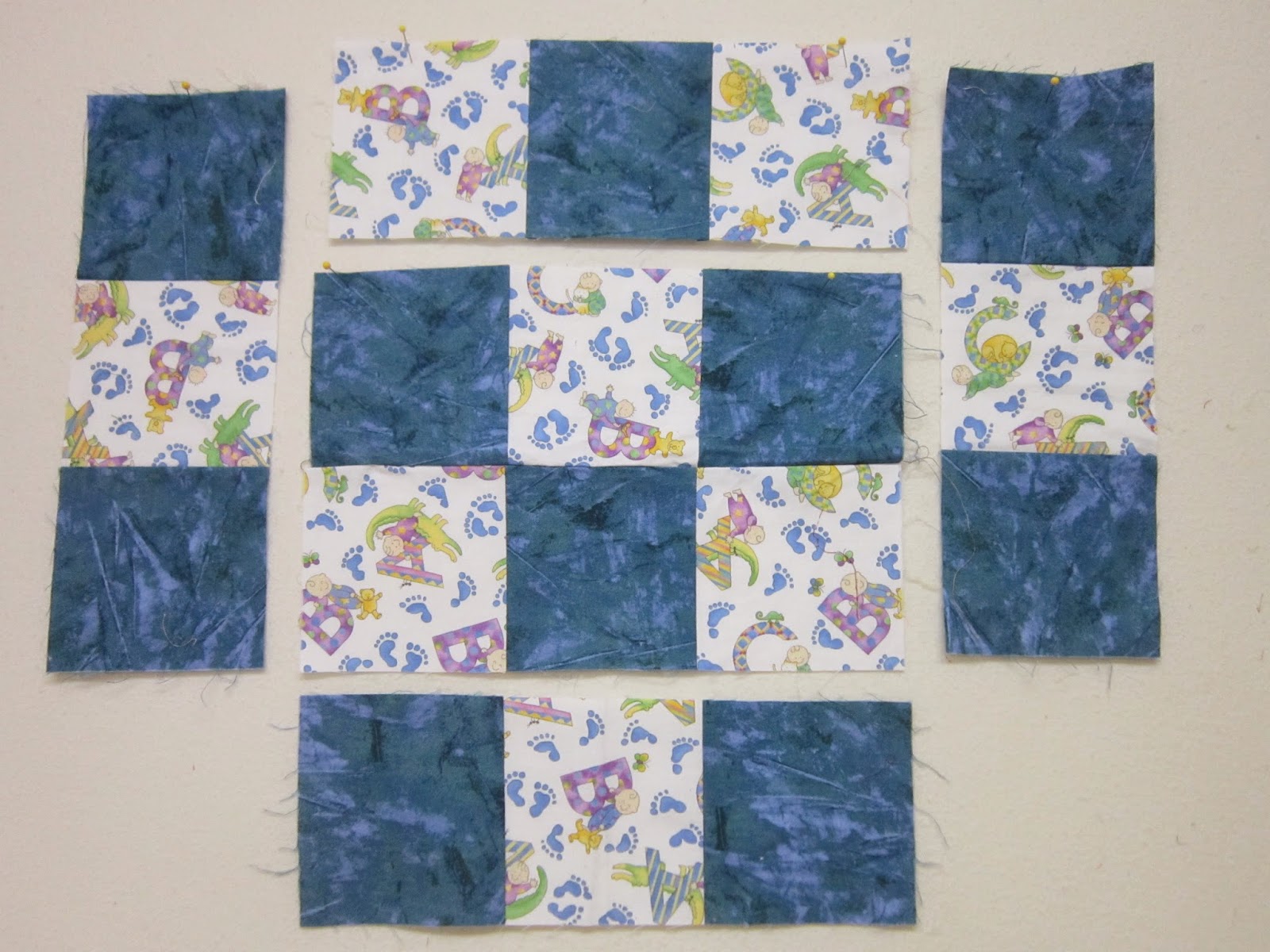 Our Stashbusters numbers challenge for February were UFO #2 and UFO #64. My #2 was a group of orphan blocks left over from making a couple of charity baby quilts. I still had plenty of the blue fabric and found a little more of the print. Since this was just a simple block design, I let Laura put the top together for me. 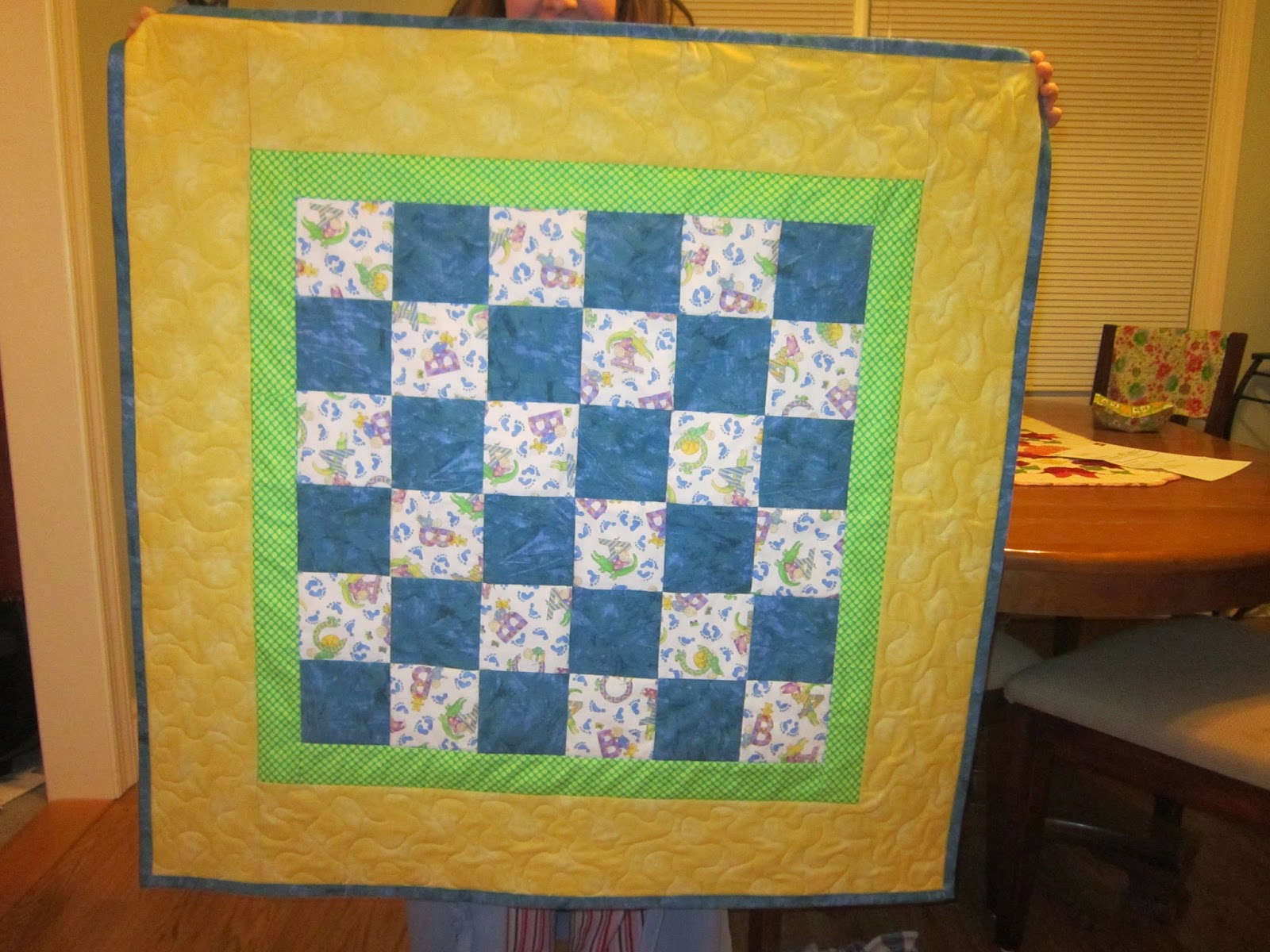 I had planned to quilt it on my longarm machine, but when I started sewing, it was skipping stitches and had more of the intermittent tension issues that it's had for more than a year. I was SO frustrated! But, I decided that since this quilt was already on the frame, I would go ahead and baste it together, 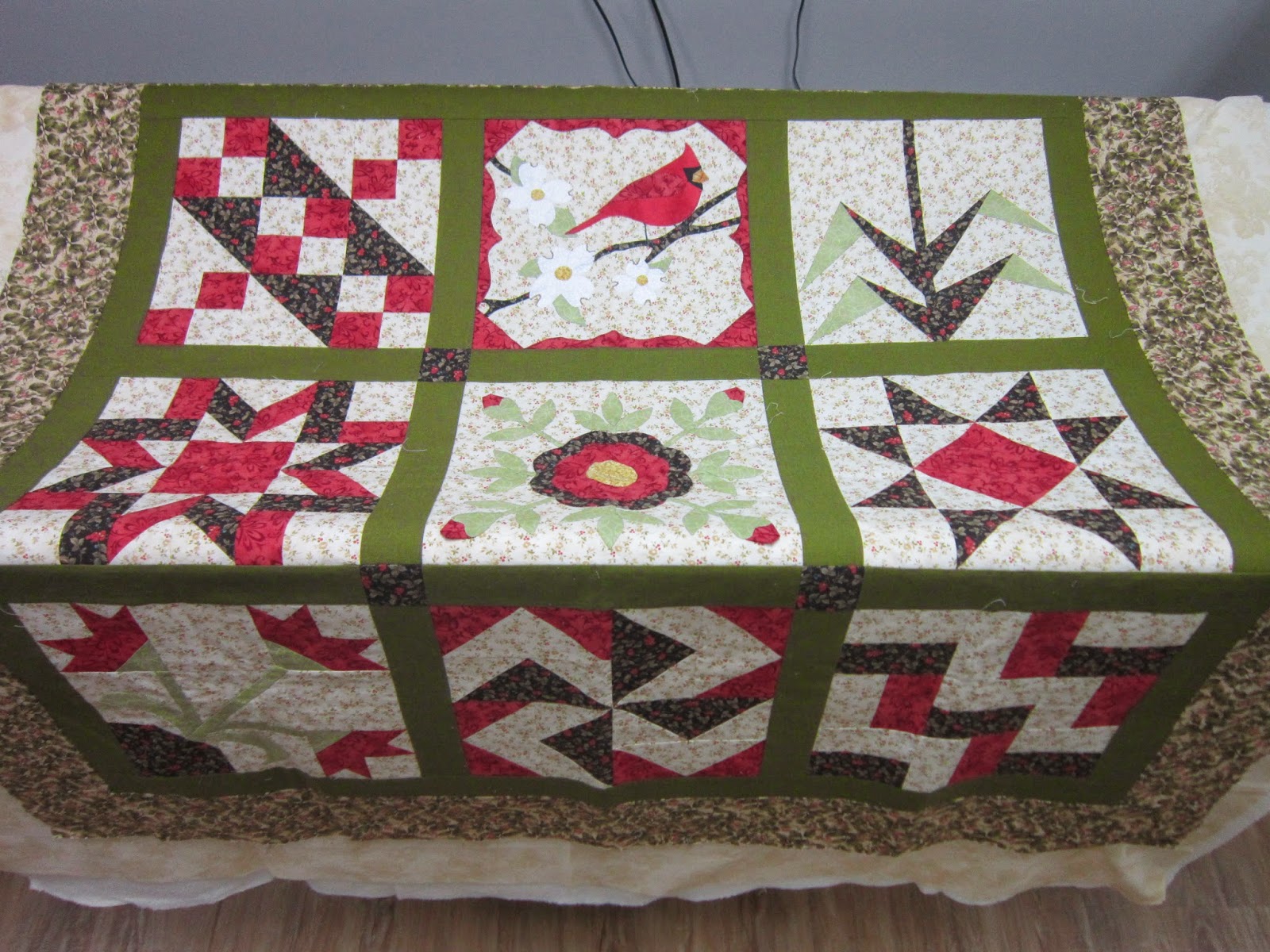 then I just quilted it on my sewing machine, doing a stitch-in-the-ditch around the blocks and a meander in the outer border. Now we just need to find somewhere to donate it!


I only have 50 UFOs on my list, so this is my #50, instead of #64 in the Numbers Challenge and it's my oldest UFO. In 2007 our local quilt guild was doing a Virginia quilt for their block of the month program to celebrate the 400th anniversary of Jamestown. Each block has some connection to the state of Virginia (the upper right block is supposed to be a tobacco plant--there are yo-yo's that will be added after it's quilted!) Unfortunately, while my longarm is out of commission, this quilt won't be worked on. In fact, my pile of flimsies is getting larger all the time! Once we get it fixed, I'll be having a major quilting marathon! 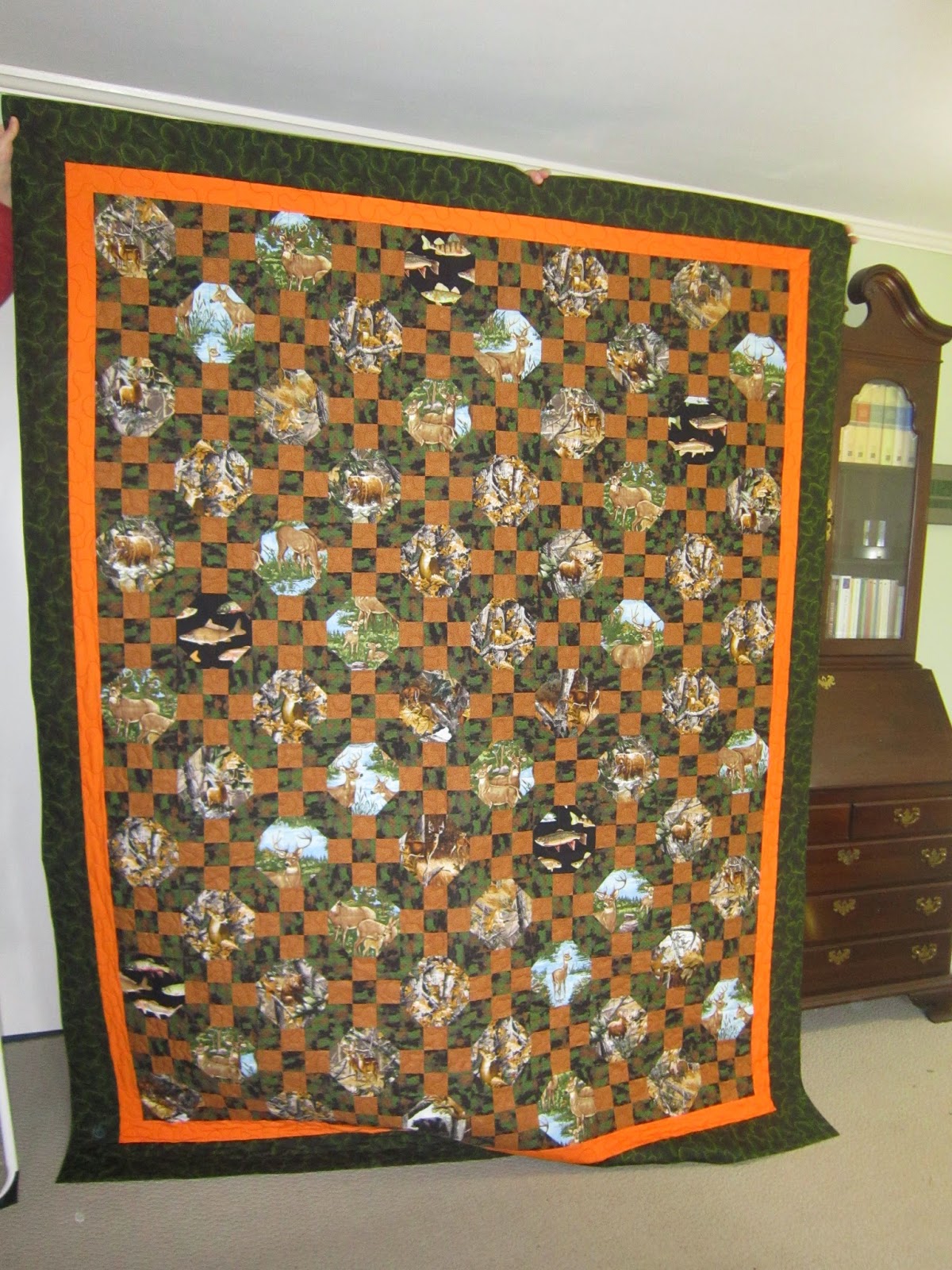 For some reason, my longarm machine worked fine long enough for me to quilt Hunter's quilt (it did start acting up near the end). I added a border of bright orange to represent the "blaze orange" that hunters wear to protect them from shooting each other. 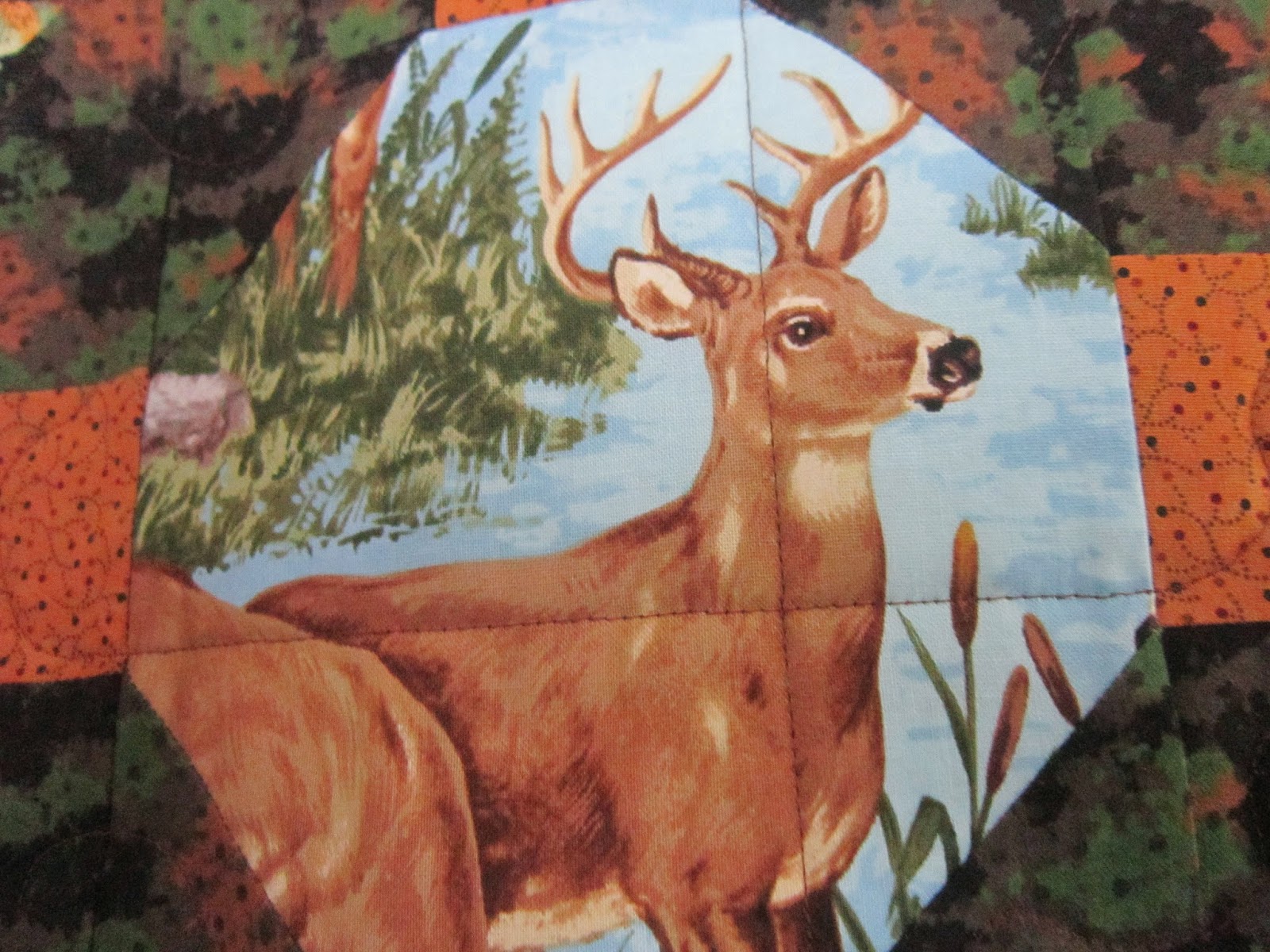 Hunter has a quirky sense of humor and so for fun, I quilted crosshairs on each of the blocks with wildlife. I think he'll get a big kick out of that (and out of Grandma's aim!) 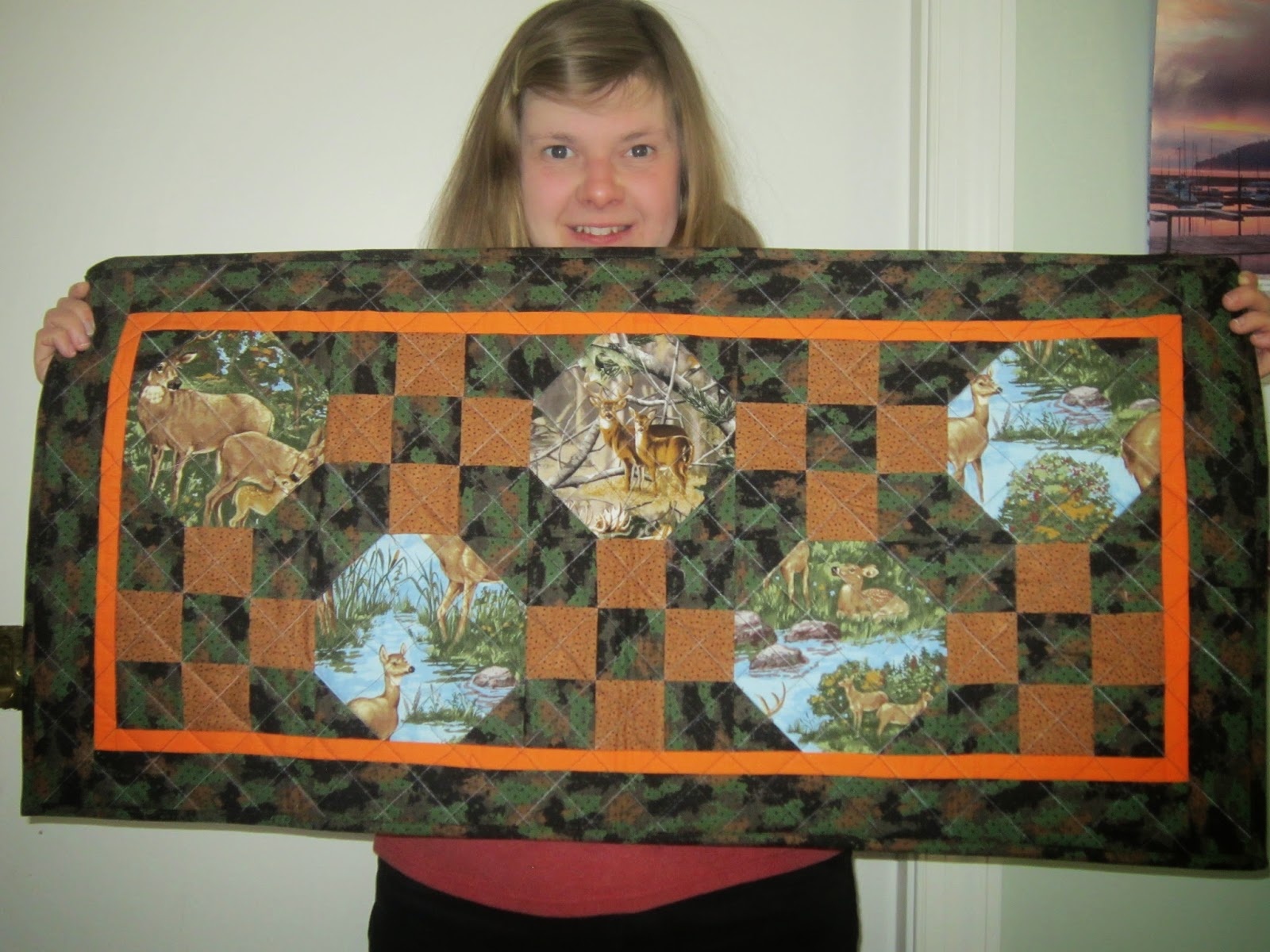 In addition to finishing UFOs this year, I also want to make sure that I don't have any leftover blocks from the projects I complete. With that in mind, I took the extra blocks from Hunter's quilt and had Laura sew them into a matching table runner. I had her quilt it too, although I did all the binding. 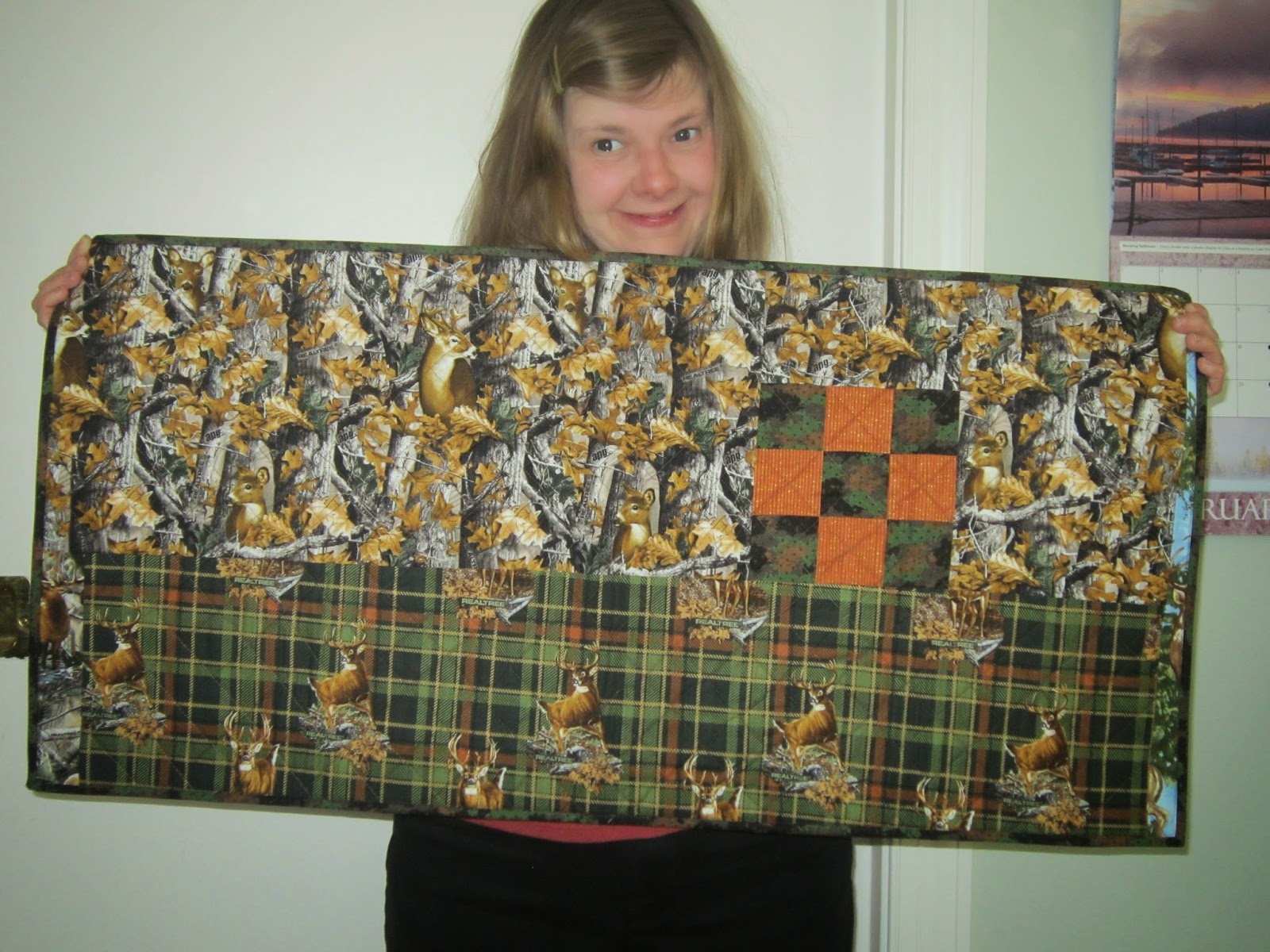 There was one remaining block, so I incorporated it into the backing, along with leftover scraps of fabric. 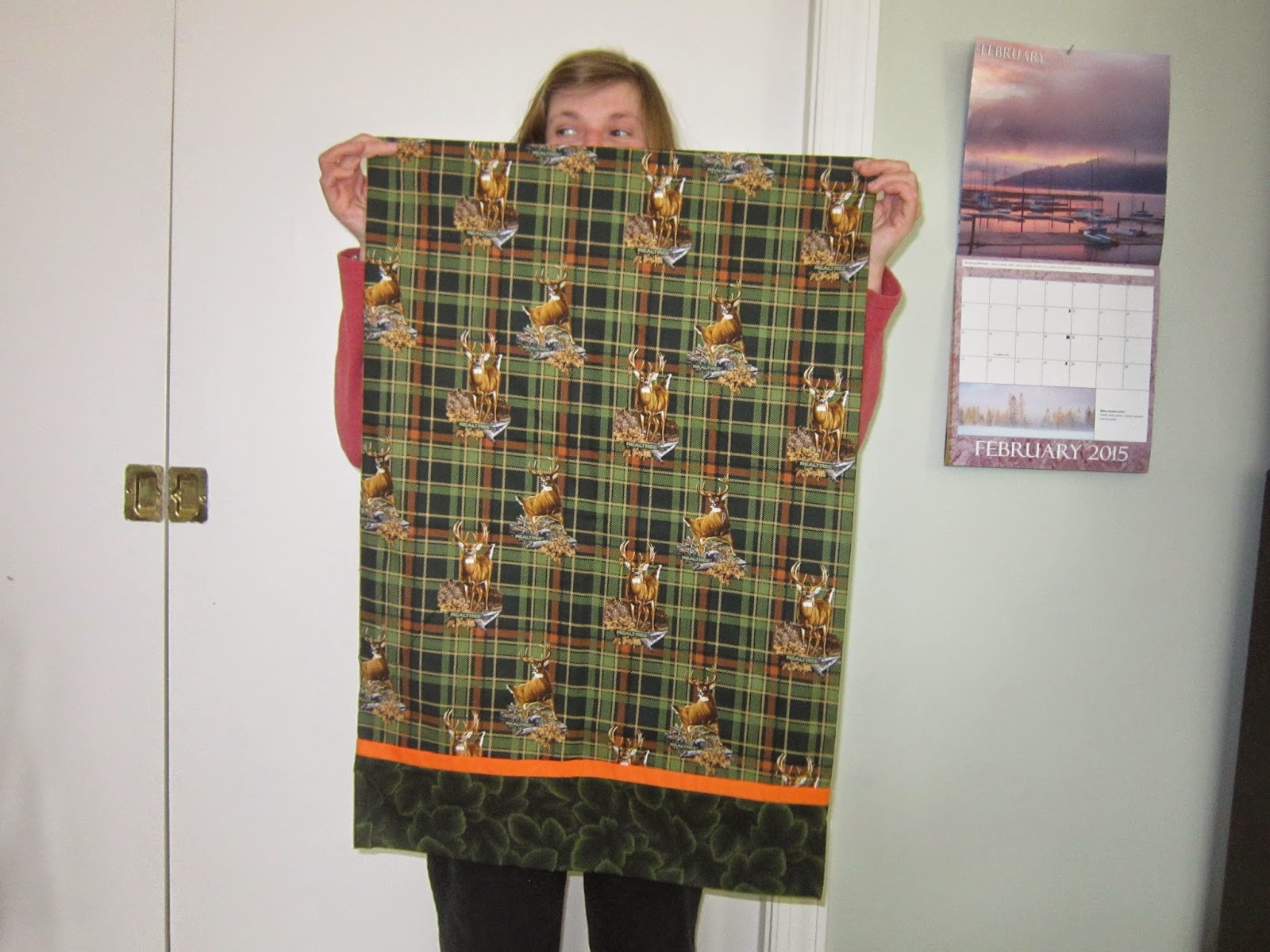 Hunter also gets a matching pillowcase! 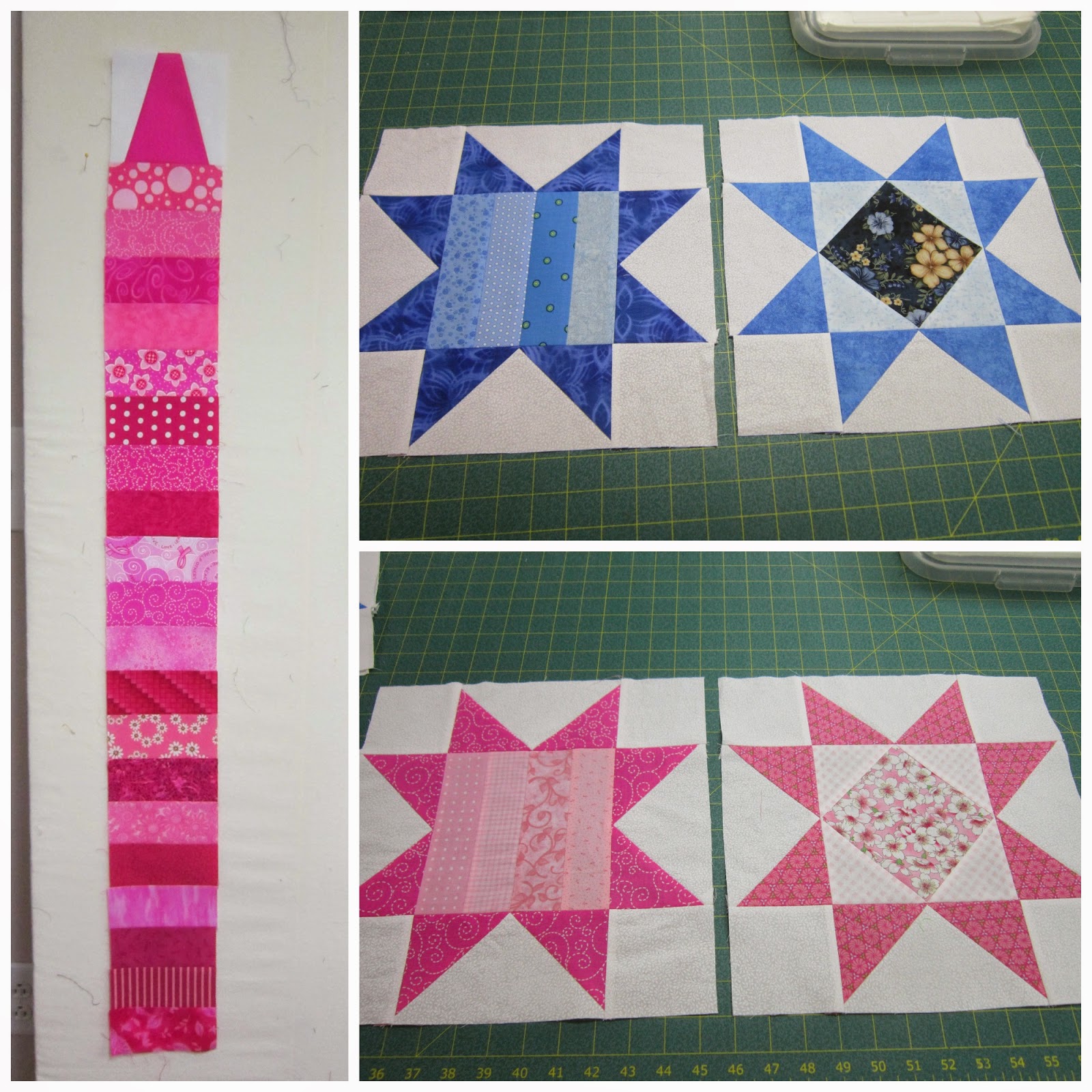 I've been wanting to participate in the RSC 15 this year, especially since I LOVE sawtooth star blocks, but I was a little slow getting started. I cut out blocks for both this month (pink) and last month (blue) and finally got them all sewn together this week. I also put together the pink crayon for my playroom quilt. 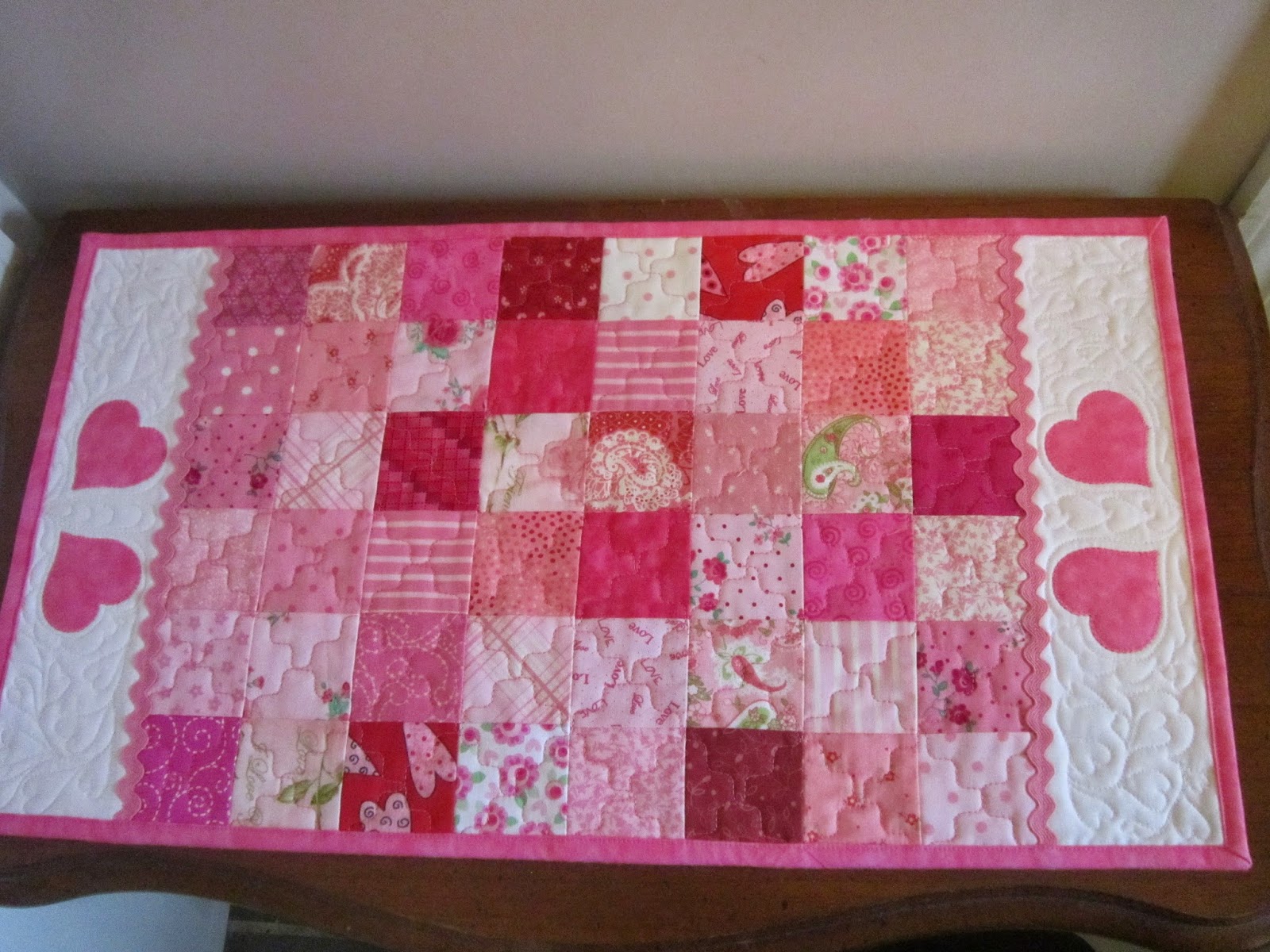 While I was playing with pink fabrics, I cut out some extra pieces to make a little table topper for my front entry. Then I just quilted it on my sewing machine with a wavy stitch done in a crosshatch and I quilted freehand hearts in the borders. I got it done just in time for Valentine's Day! 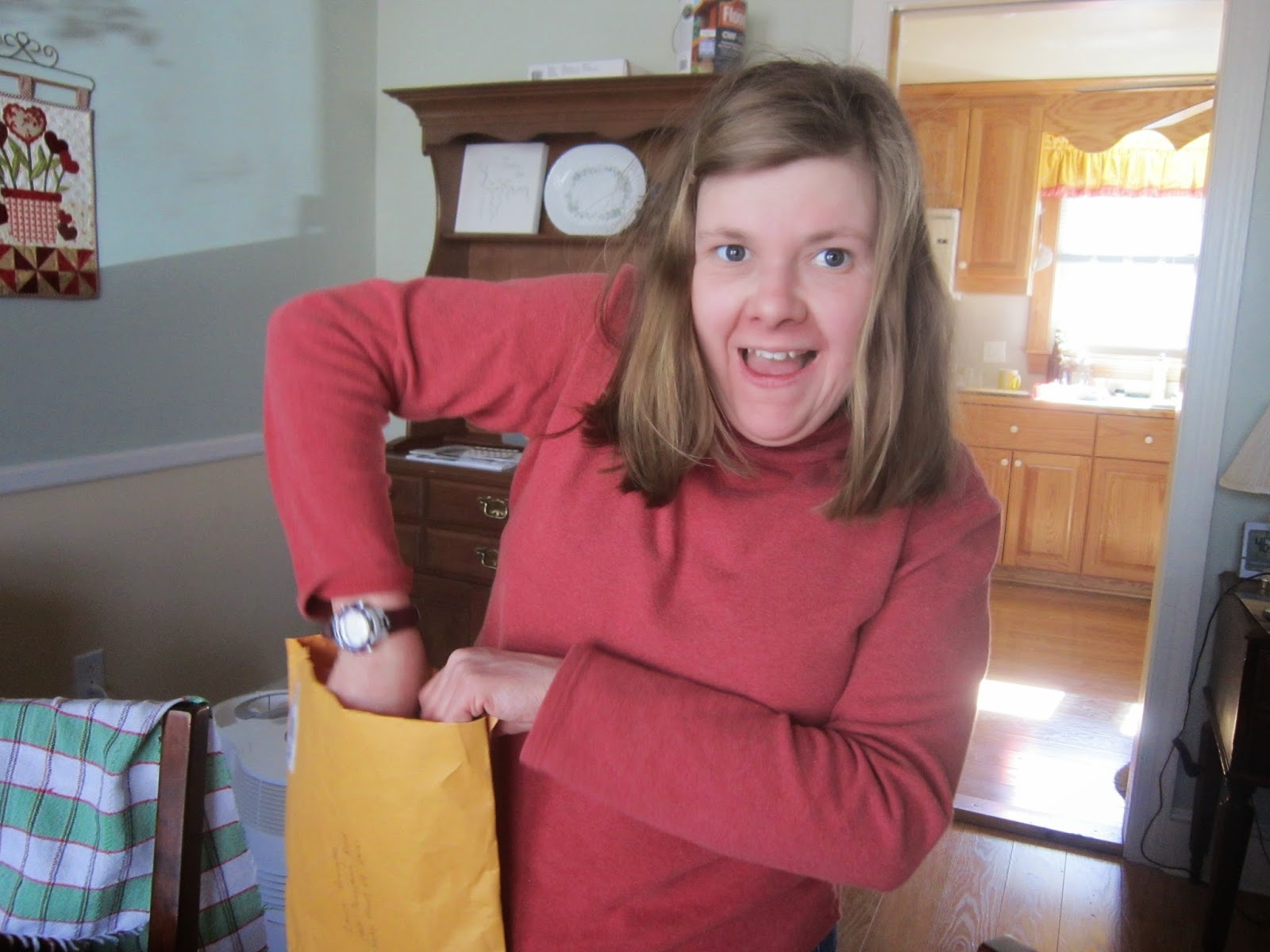 A couple of weeks ago, a generous friend sent Laura some really cute 6-inch spring-themed squares of fabric. Laura was thrilled to get a package in the mail addressed to HER, but even more so to have it be a package of fabric! 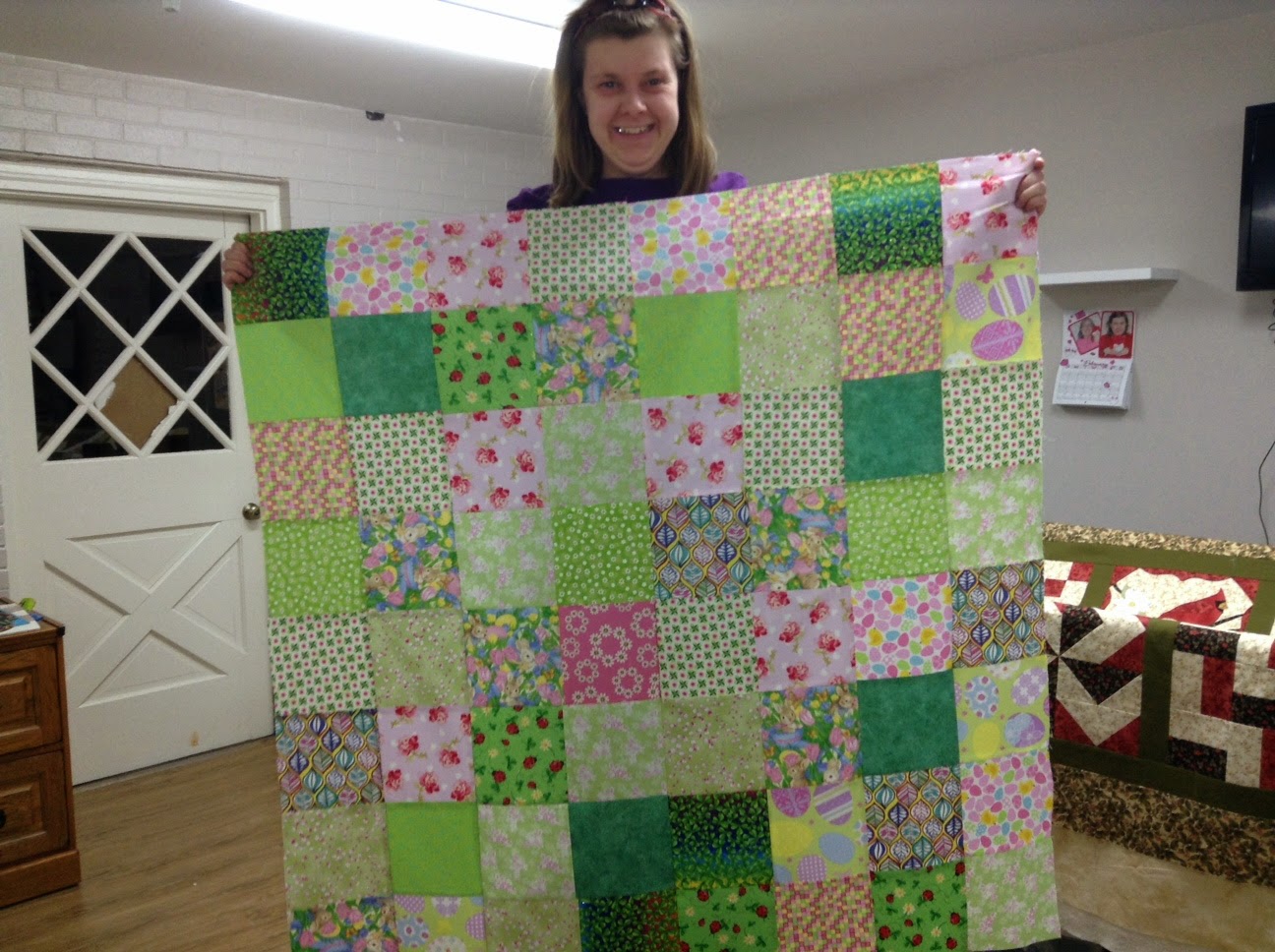 In less than a week, she had all the pieces sewn into a top and we'd chosen fabric and added borders. It's now waiting with all the others in my "to-be-quilted" pile! I'll post another picture once it's completely done.

Oh yes, I finally got my Grand Illusion Mystery top completely assembled! There's not much point in posting a picture, since I used the colors Bonnie suggested and my quilt looks almost exactly like hers. But once it's quilted, I'll probably include one anyway, just to show that I actually did it! 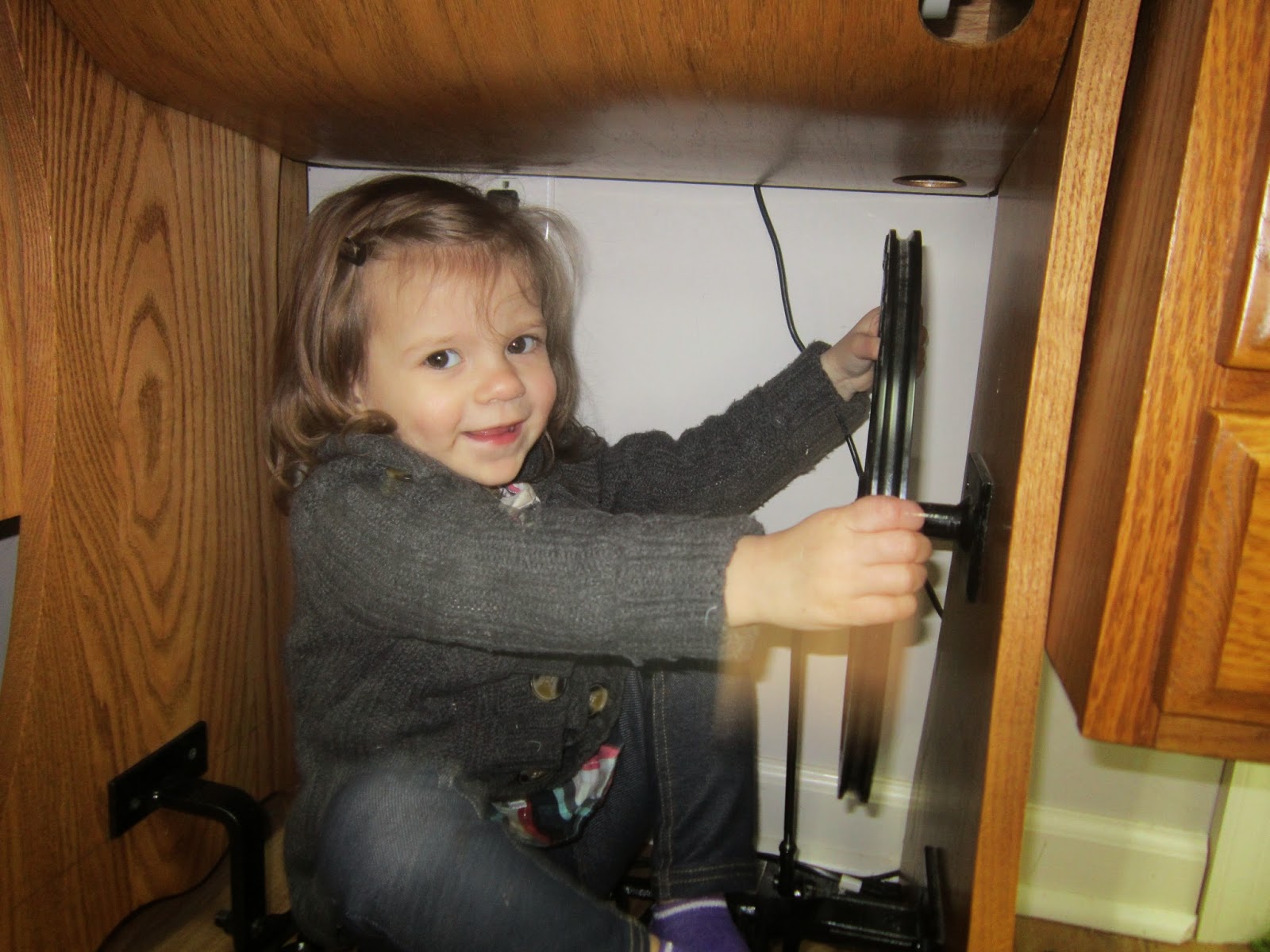 On a final note, in my quilt studio I have a treadle machine in a cabinet, but the belt has been removed and I just use the cabinet as a table to hold my laptop. However, that treadle base and wheel are a favorite of the grandkids, who love to come and "drive" the treadle!

Laura has been feeling a bit under-the-weather all week and now I think I'm coming down with her cold! So there won't be quite as much going on in the studio, but I'm sure we'll still somehow manage to...get more done!
Posted by Gwen at 8:49 AM