There was significantly less activity happening this week in our studio, since I definitely caught the cold that Laura threw at me! But we did manage a little bit of sewing time. 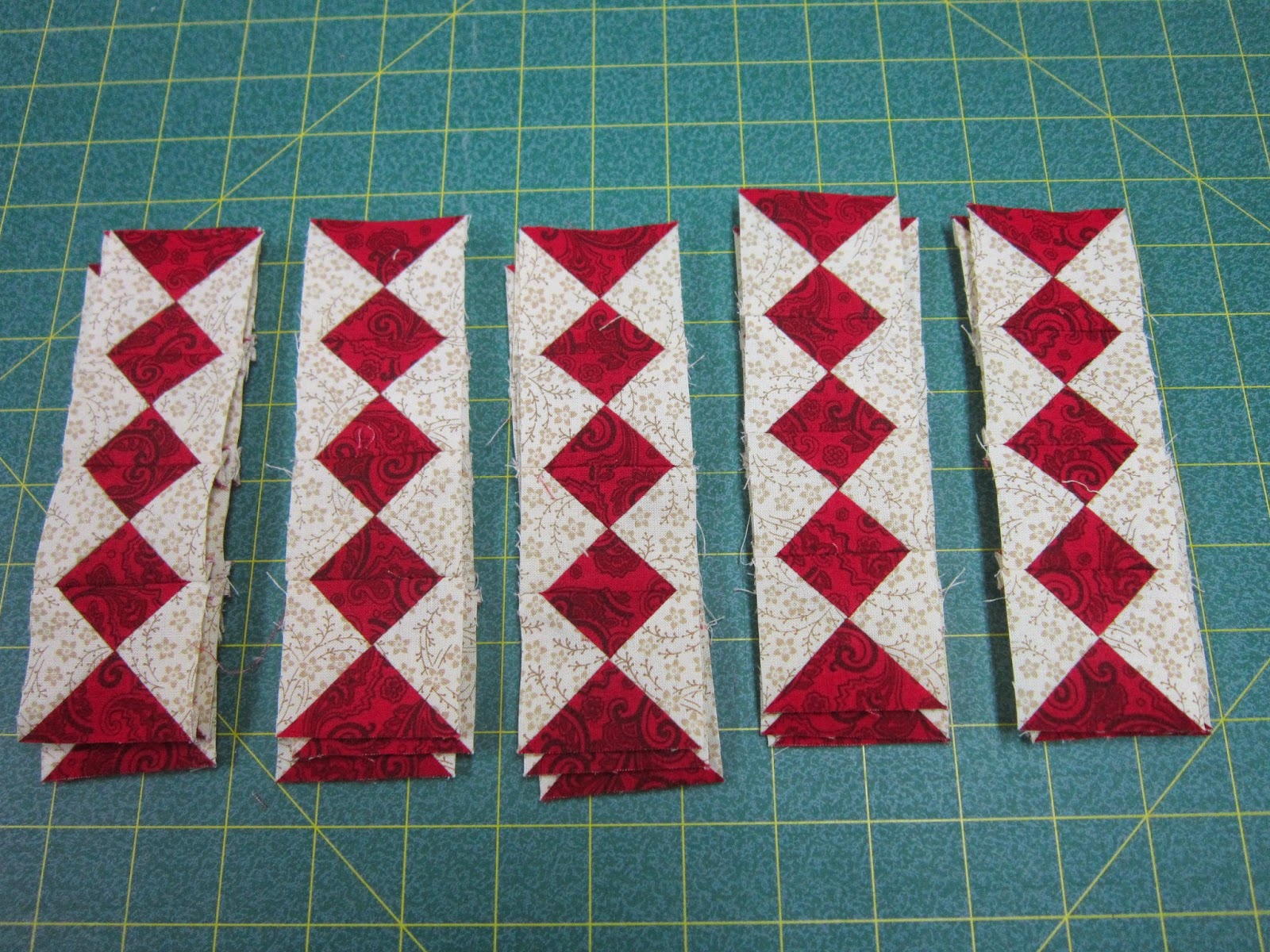 Last year I began participating in Shabby Fabric's "C is for Christmas" BOM. Each month for the past 5 months I've been diligently embroidering Christmas designs on two blocks. This month the blocks came for the last row and I decided it was time to put the rows together. There is sashing between each block made of 2-inch quarter-square triangles--60 of them altogether. Four blocks are sewn into strips and then sewn between the blocks. I thought the strips were just lovely, even if something of a pain to sew! 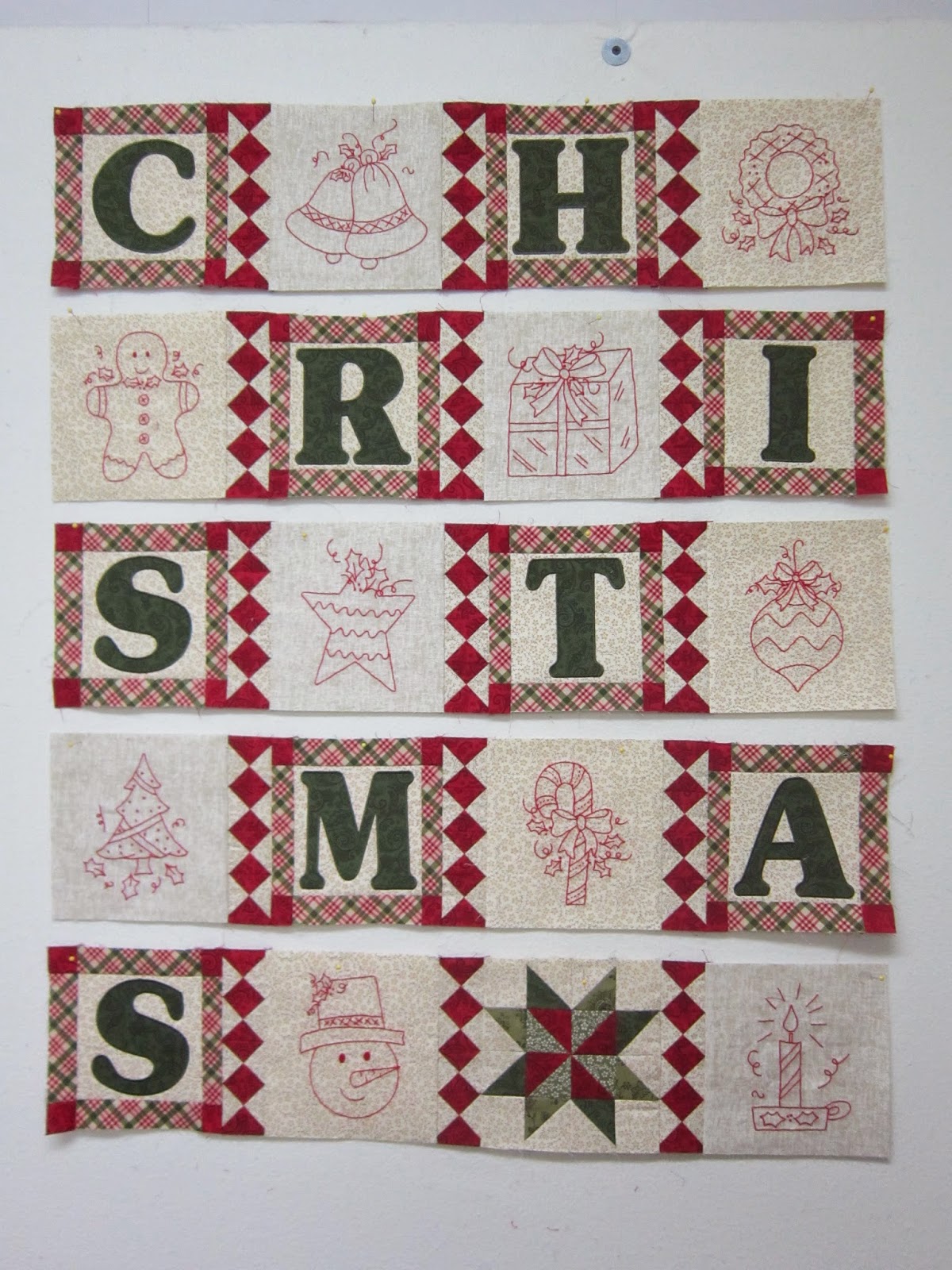 I satin stitched around the letters and added the sashing around those blocks too, in addition to assembling the one pieced block. These are the completed rows. There will be MORE quarter-square triangles to be made in March--162 of them, to be exact!! They will provide sashing between the rows and then a first border around the quilt. In April the fabric will be sent for the final borders and the binding and then this project will be ready for quilting. 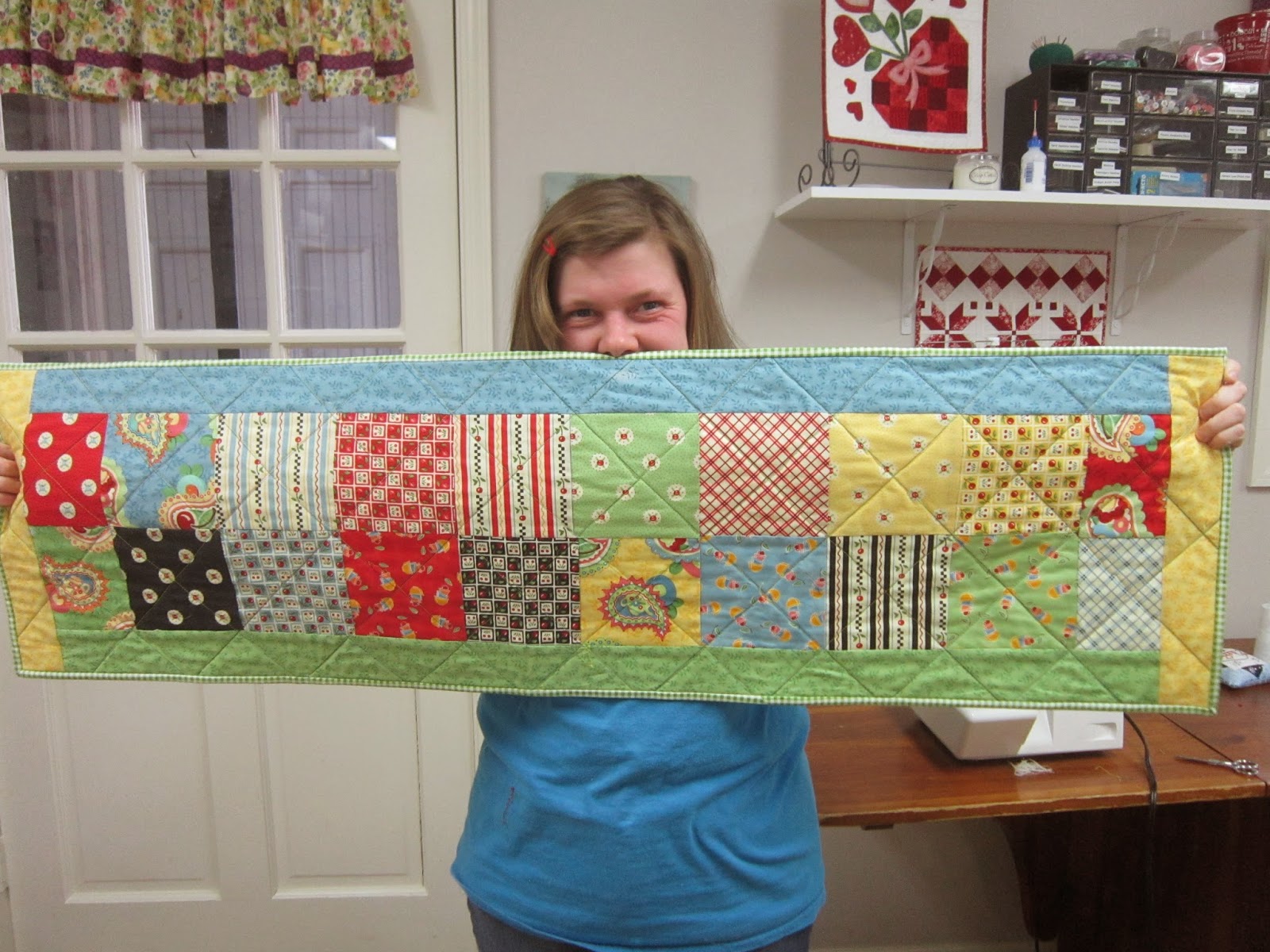 While I worked on my Christmas quilt, Laura completed the quilting on the last of the table runners she had made. 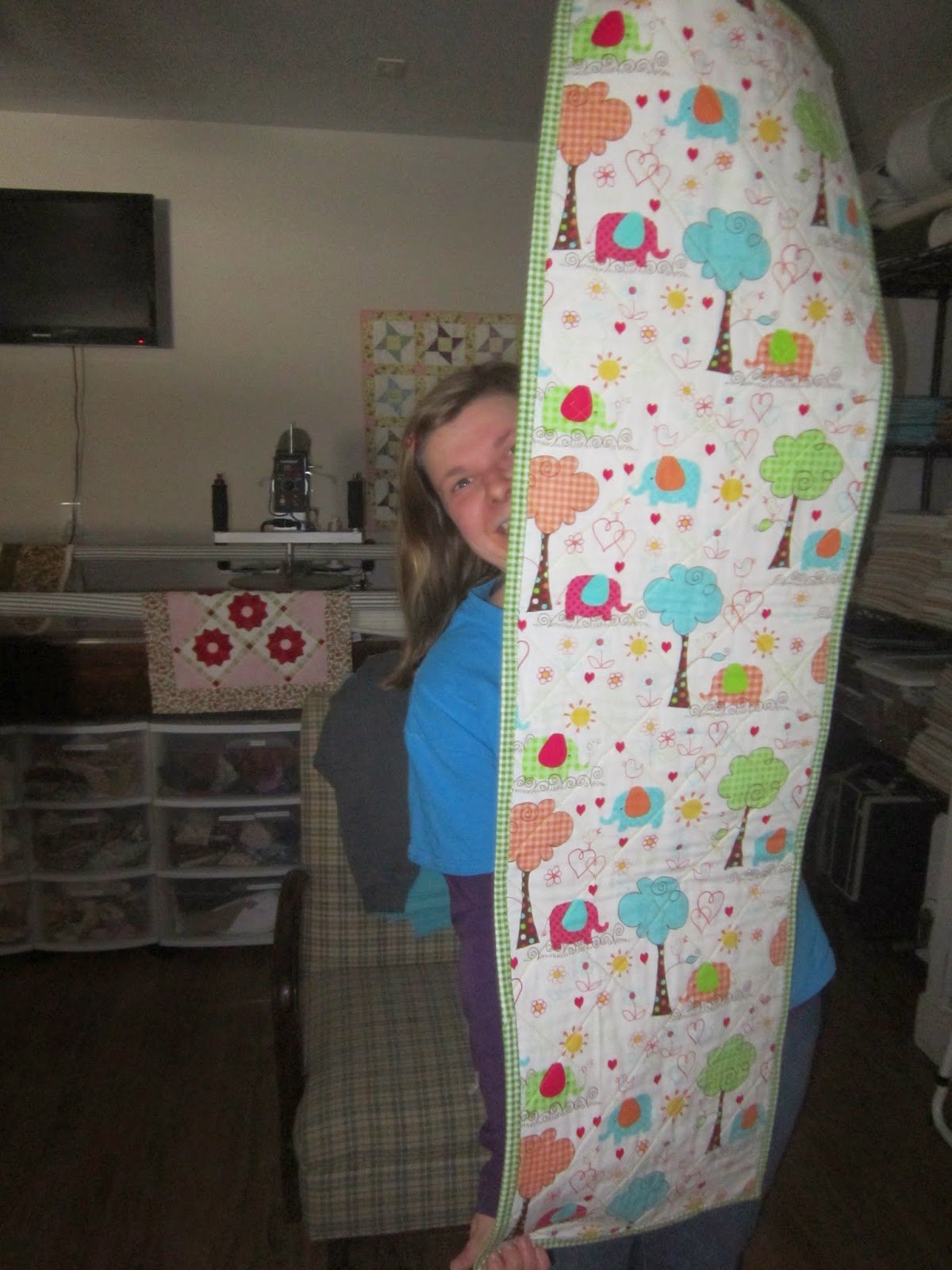 It has a really cute fabric on the back! 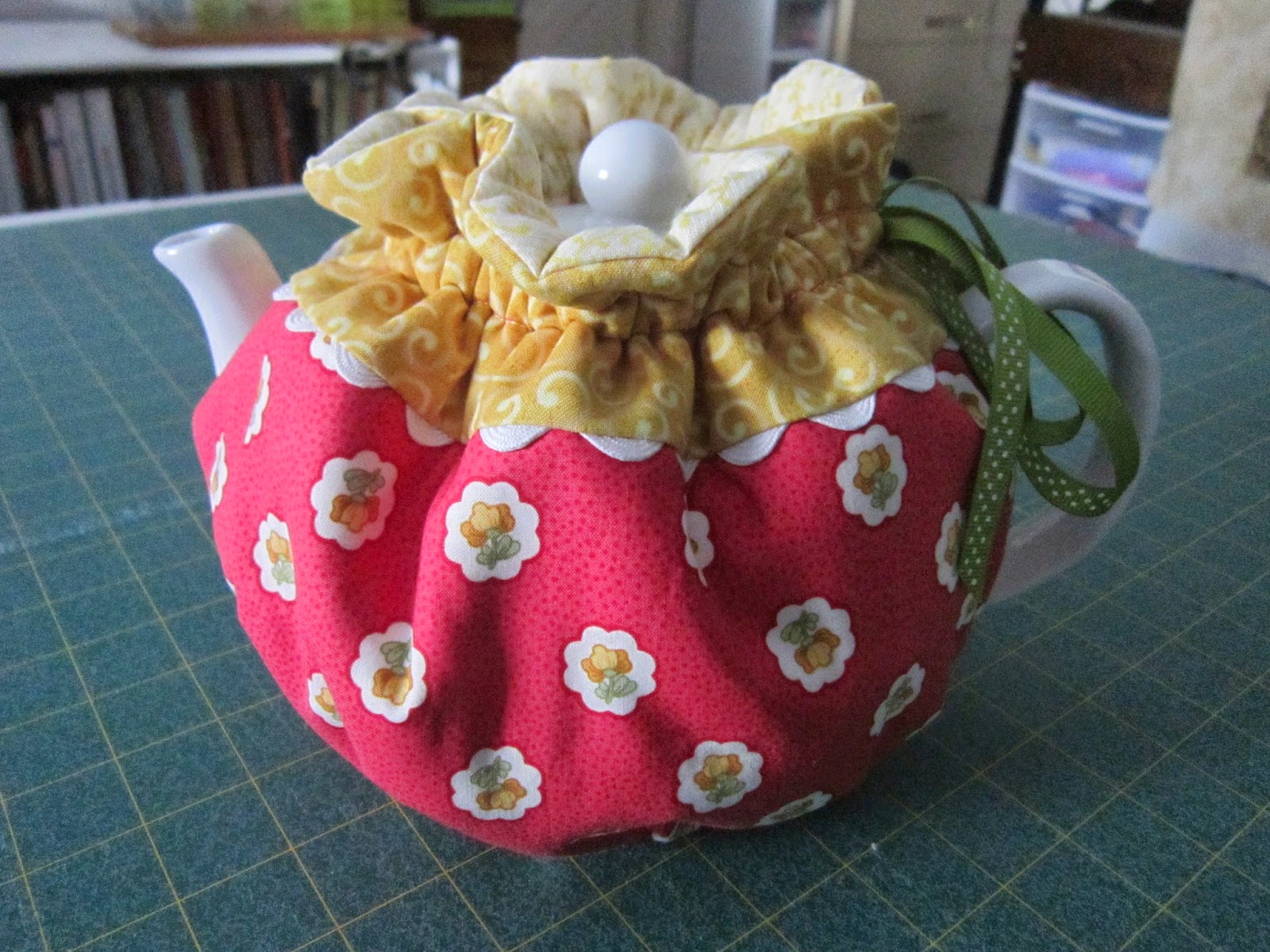 As the week progressed and I began feeling a little more like sewing, I started working on some other projects. I had cut out two tea cozies--one for me and one for a friend. I'm a budding herbalist and I drink a lot of tea. I had seen this pattern for a tea cozy and bought it because I thought it was so cute! But I didn't have a teapot! I was able to order one through Amazon and now it looks so nicely dressed in its new cozy! 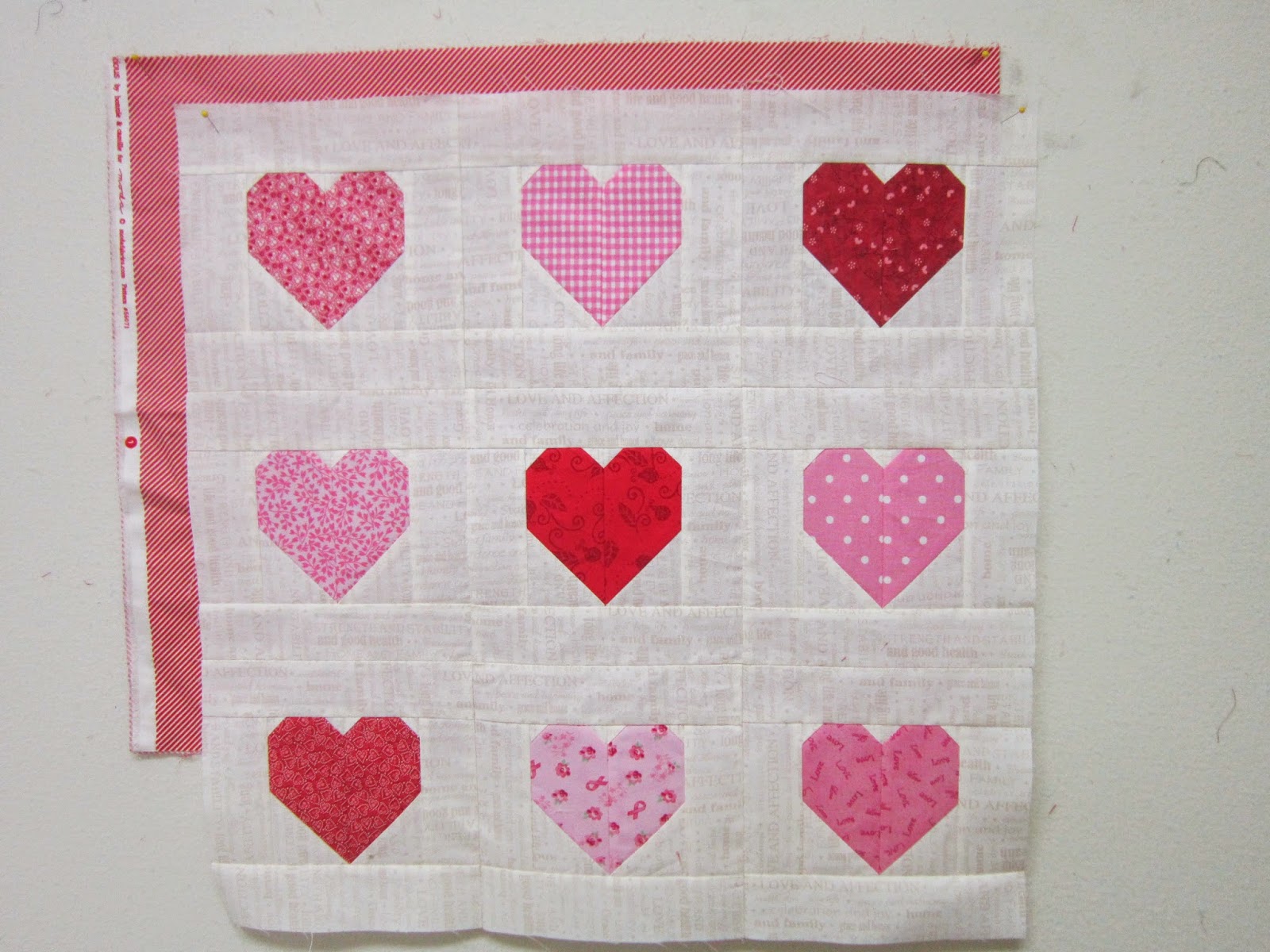 Although February is essentially over, I wanted to finish the heart wall hanging I had cut out at the beginning of the month. I got it all assembled and then began auditioning borders. After rejecting quite a few, I decided this one would work the best. You can't really see it very well in this photo, but the pattern in the border is a diagonal stripe. 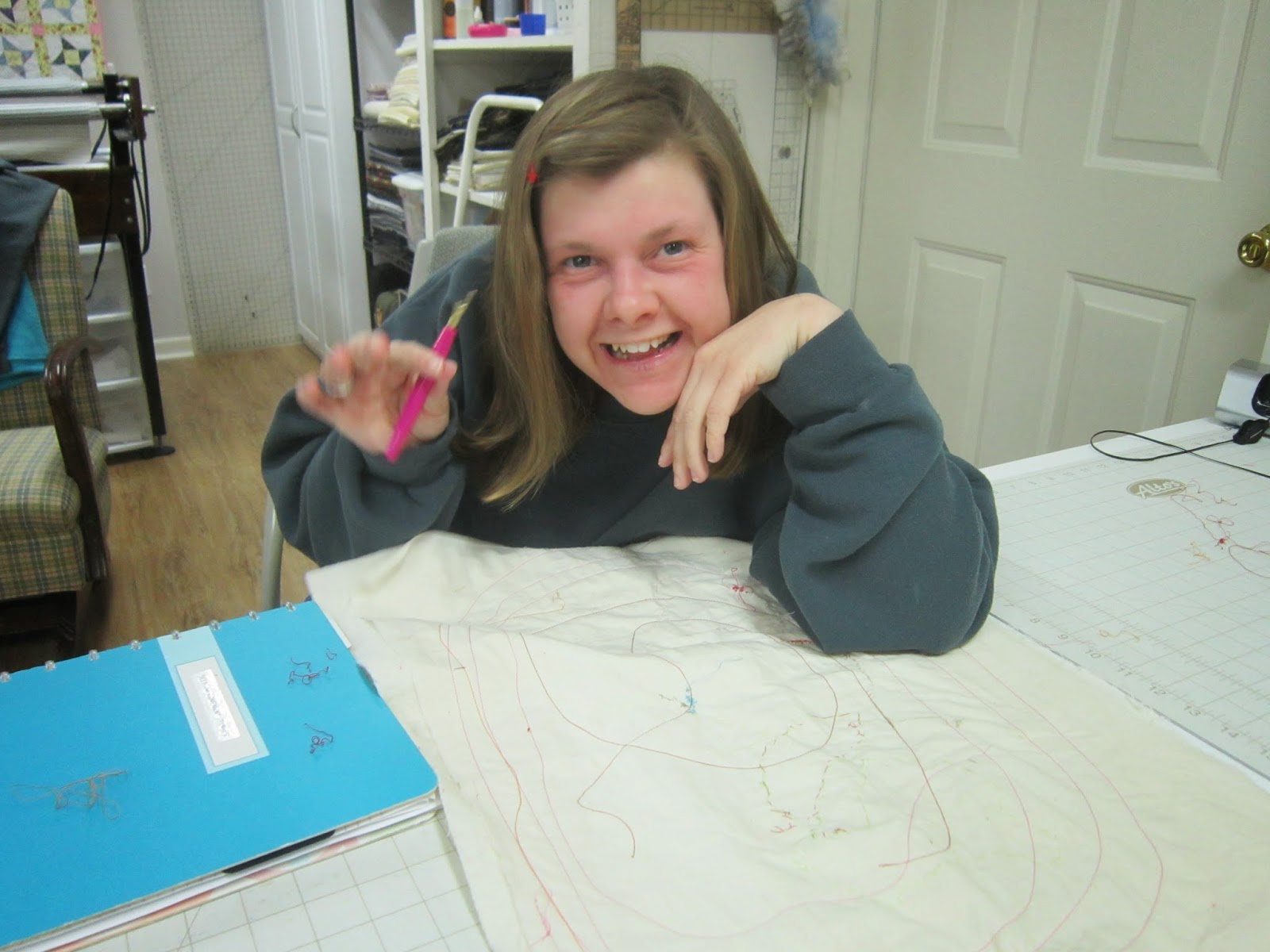 Once she was done with her table runner, I really didn't want Laura starting another project while I wasn't feeling too great. So she entertained herself by ripping out all of the free-form quilting she had done on some muslin and batting. I'm not sure why she has this thing about ripping out previous stitching, but she seems to enjoy doing it and is very pleased with herself as she does it. If it makes her happy (and keeps her entertained) then I'm happy too! 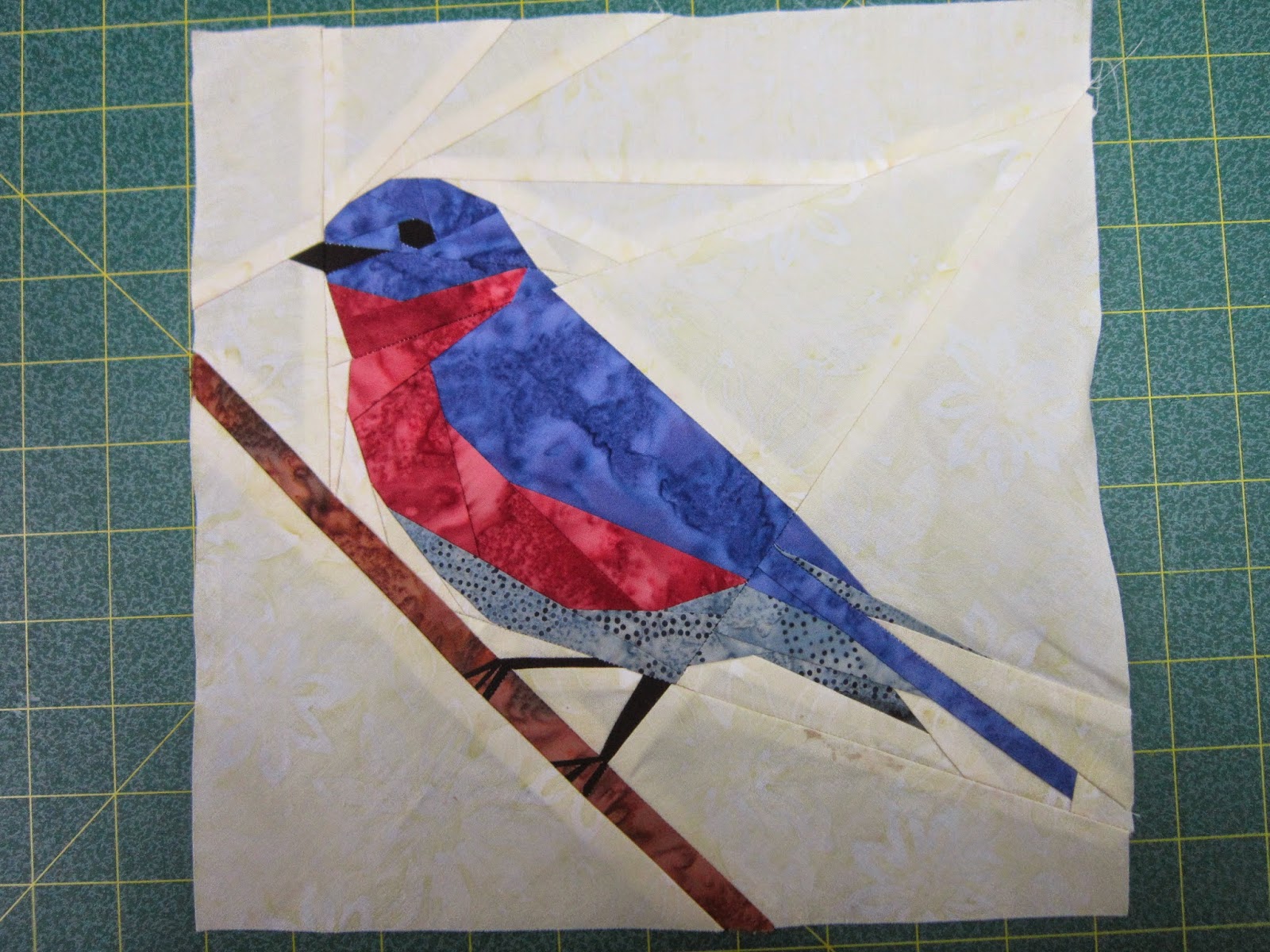 Our Stashbusters' Number Challenge for the month of March are UFOs #7 and #17. This is my #7--a paper-pieced bluebird. It was a free pattern and I thought it was so pretty. Since I love bluebirds I wanted to make it and I did. But meanwhile it's been languishing in with all my orphan blocks. So this month's challenge will be to make it into something I can enjoy seeing more often. 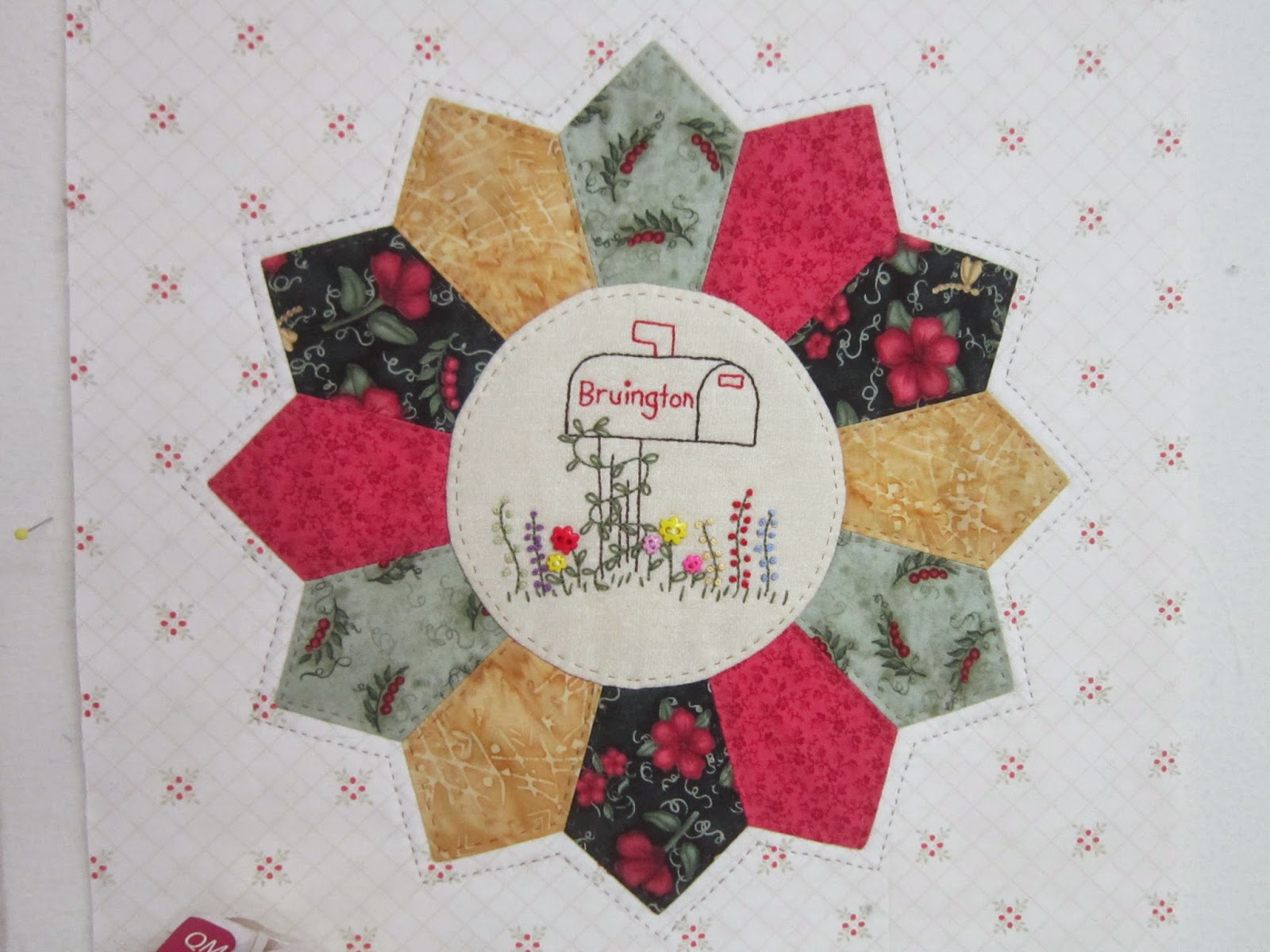 My #17 is this wall hanging that is practically already done. The instructions for it had it framed with barn wood. It's 14 inches square which is an odd size for a frame although I could have it custom-framed. But I think I may just go ahead and add a little extra quilting to it and then bind it and call it done. I would love to have this finally finished and hanging somewhere in my home. 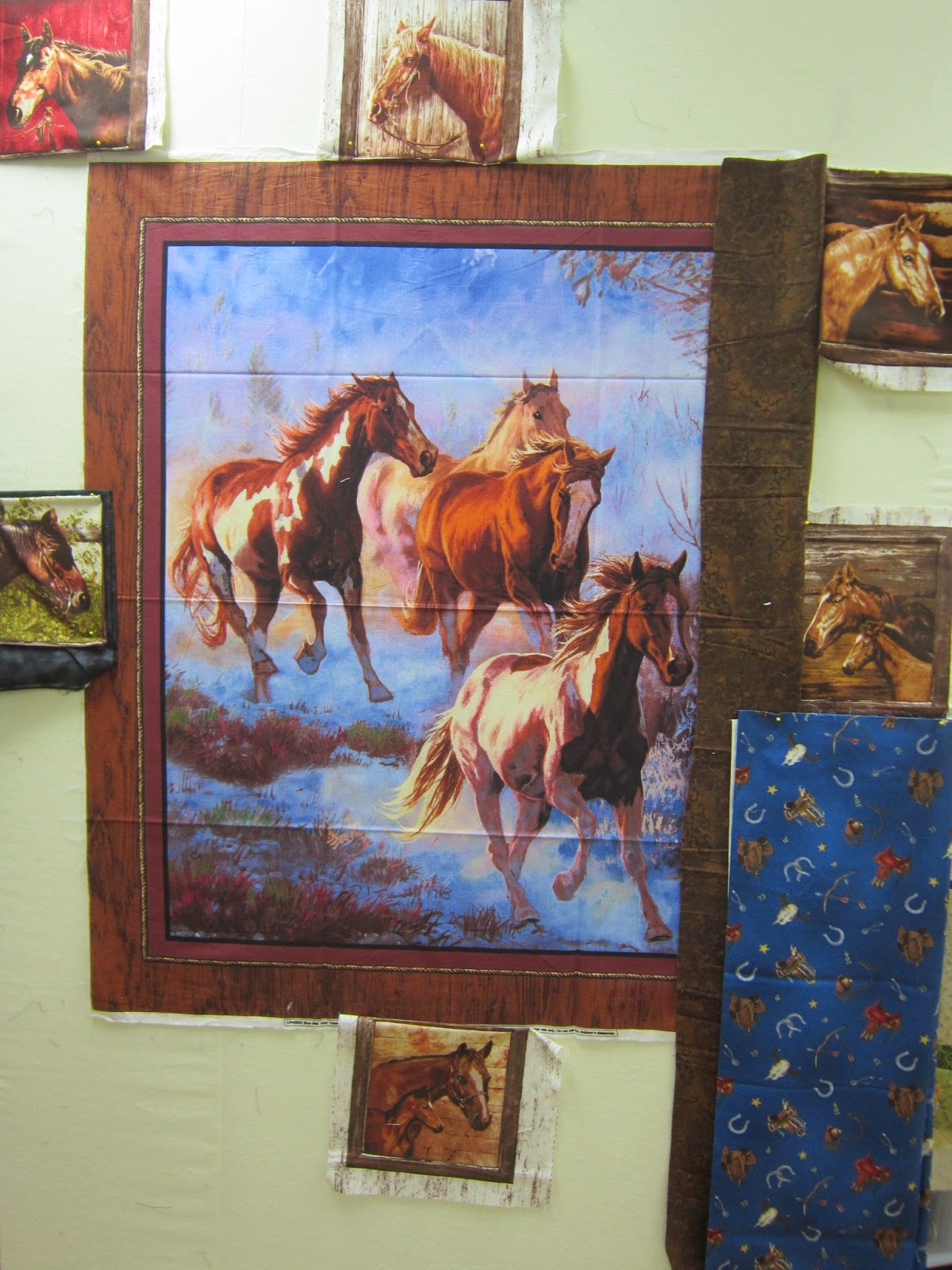 My granddaughter, Belle will be turning 12 in May, so this is her year for a bed-sized birthday quilt. I asked her what she wanted in a quilt and she said she wanted a large picture of a horse in the middle. When I found this panel, I knew it would be perfect! In fact, my daughter, Mary said the horse in the front looks just like HER horse! Belle has ridden Justin many times and she'll be thrilled to imagine him as the lead horse on her quilt! In the meanwhile, however, my great challenge over the next couple of months will be to figure out how best to incorporate the panel and other horse fabrics into a pleasing quilt top for Belle's birthday. Any ideas will be greatly welcomed!

It's such a blessing to be feeling more normal again and the weather is getting nicer too! So I'm looking forward to a new week and a new month and hoping to Get More Done!
Posted by Gwen at 6:24 AM