A couple of weeks ago, we received the newest catalog from Connecting Threads in the mail. I got to look at it first and towards the end of the catalog saw a kit for an Easter table runner. When I saw it, I thought it looked simple enough for Laura to make. Then Laura got the catalog and she must have thought the same thing because she pointed it out to me and signed, "Easter!" I think she liked it, so I went ahead and ordered it for her.

Once the kit came in the mail, I cut out the pieces (as Laura's "sewing elf" while she was sleeping rather than hovering!) The next day she had it sewn together in no time, although I had to give her some extra pieces of background fabric to use as "fillers" where her borders didn't quite reach.

During another "sewing elf" session, I drew the quilting lines and Laura got that done quickly too. However, when she finished, I was busy working on another project and wasn't ready to trim her quilted project. As usual, she was impatient for the next step, so she just got the scissors and began trimming the edges of her table runner herself. Fortunately, I caught and stopped her before she trimmed the whole thing! 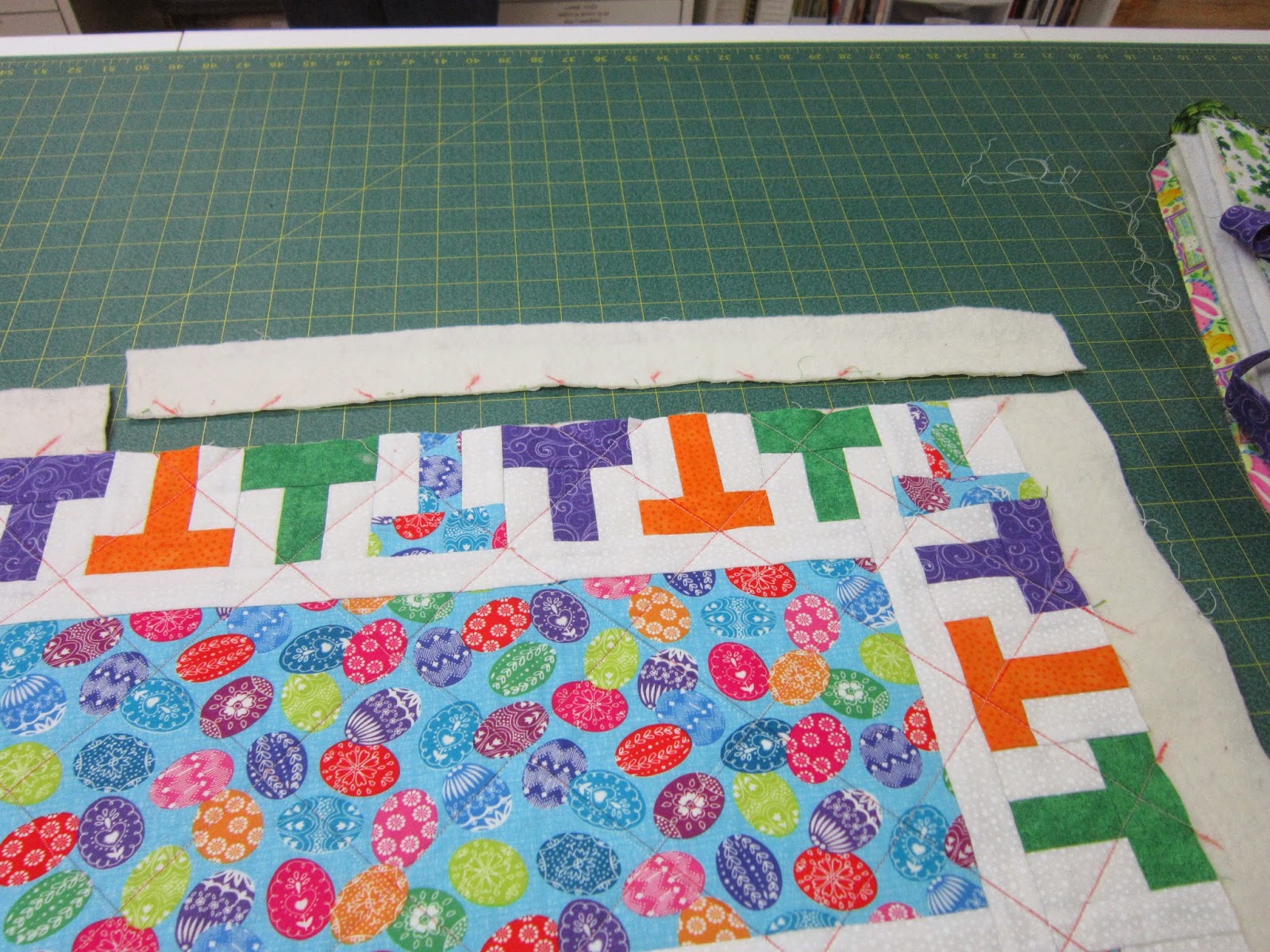 At that point, I realized I needed to stop doing what I was working on and help Laura with her project. So I trimmed off the edges with the rotary cutter and rulers and then machine sewed the binding and gave it to her to hand stitch the binding to the back. 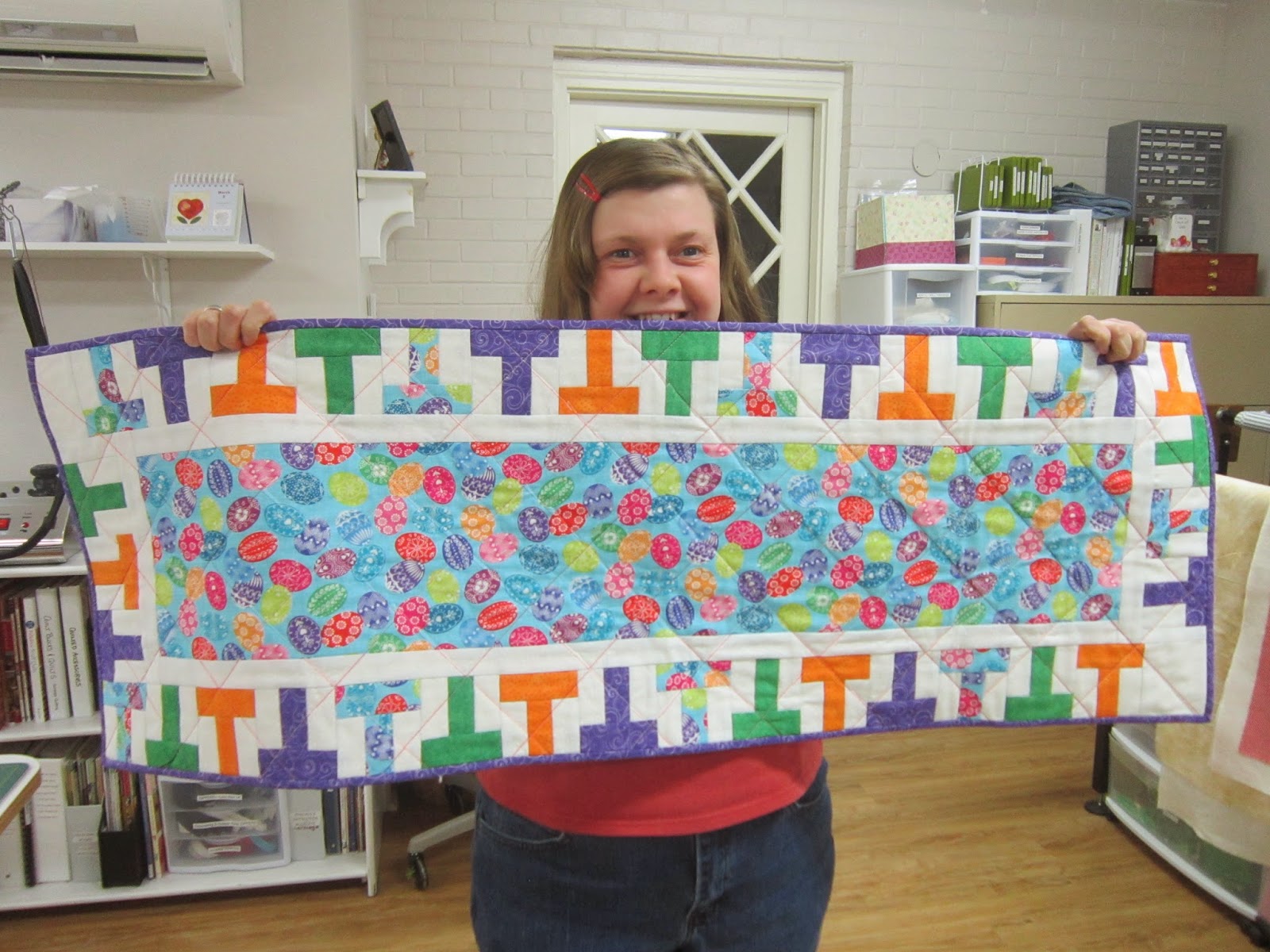 Here's the finished table runner. The kit actually came with red fabric to use in the border, but I replaced it with orange, since I thought that looked more "Easter-y" (and it looked orange in the catalog!) You can see our filler pieces in the top left and bottom right corners. So it's not quite perfect, but Laura is thrilled with it and now we have it all ready for celebrating Easter. 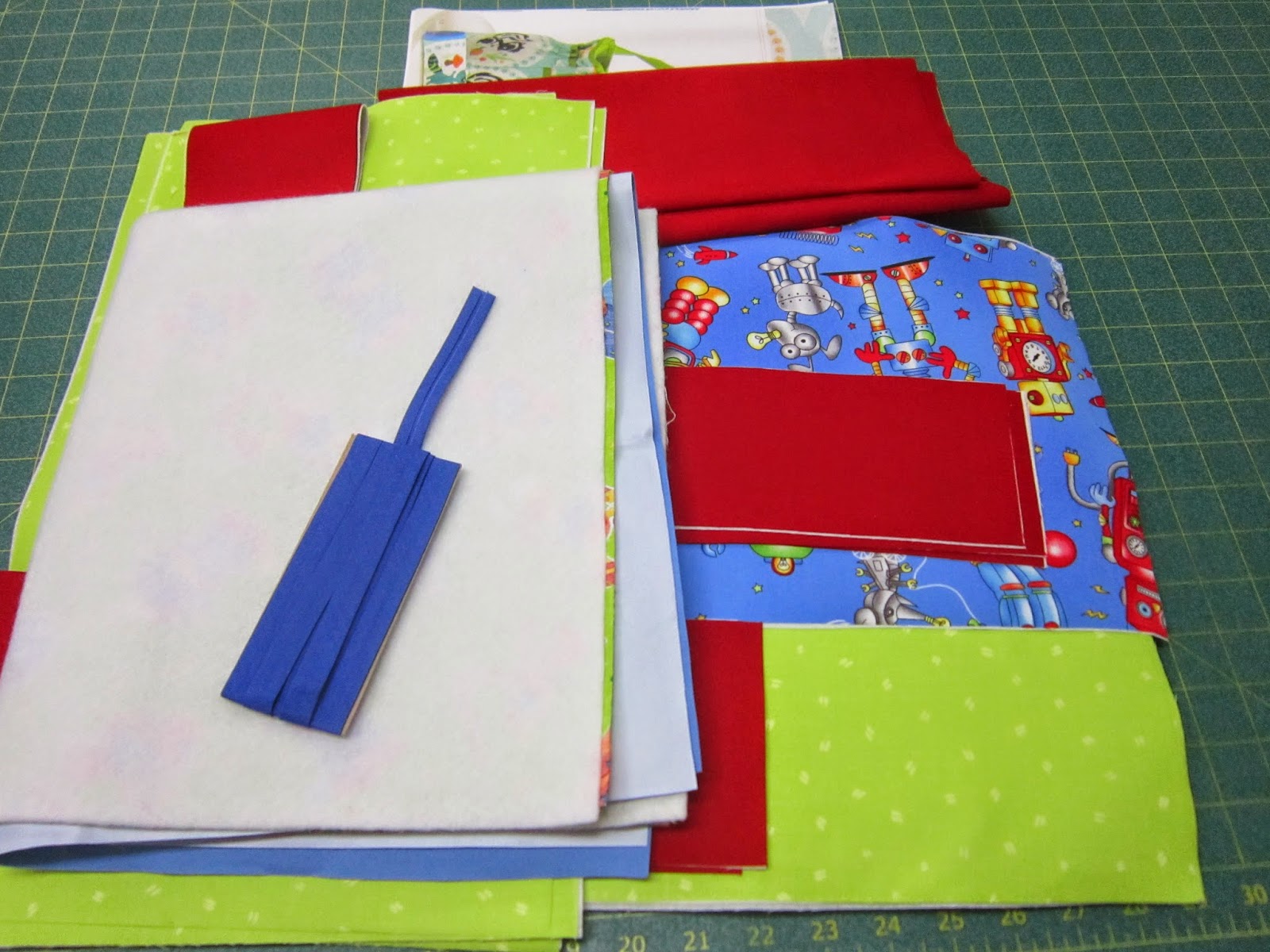 My 2nd daughter, Becca is due to have a baby boy in April. This will be her 6th child, but his coming was a bit of a surprise--she thought she was done after the last one was born! Since she thought she wouldn't be having more children, she had gotten rid of all her baby stuff. I thought she would want a quilt, but she said she'd rather have a diaper bag. So a diaper bag it will be!

Becca chose the fabric and pattern and I bought the fabric a few weeks ago. This week I got busy and got out all the fabric, interfacing and batting. Every piece of fabric, including the lining and trim has either interfacing or batting fused to it. So after cutting everything out, I fused the appropriate pieces to the back of each fabric piece. Fortunately I have an iron press which makes the job SO much easier!

This week has been a busy one with obligations for my church. I'm temporarily working with the 8-11 children at church, doing their activity days with them. We had an activity this week where we cleaned out and organized the closets and cabinet in the children's room at church. On my own, I organized all of the pictures we use in teaching the children and also the music visual aids. I spent so much time working on all that stuff that I never even went in the quilt studio on Wednesday! However, our next activity will be a sewing one, so that one should be lots of fun! 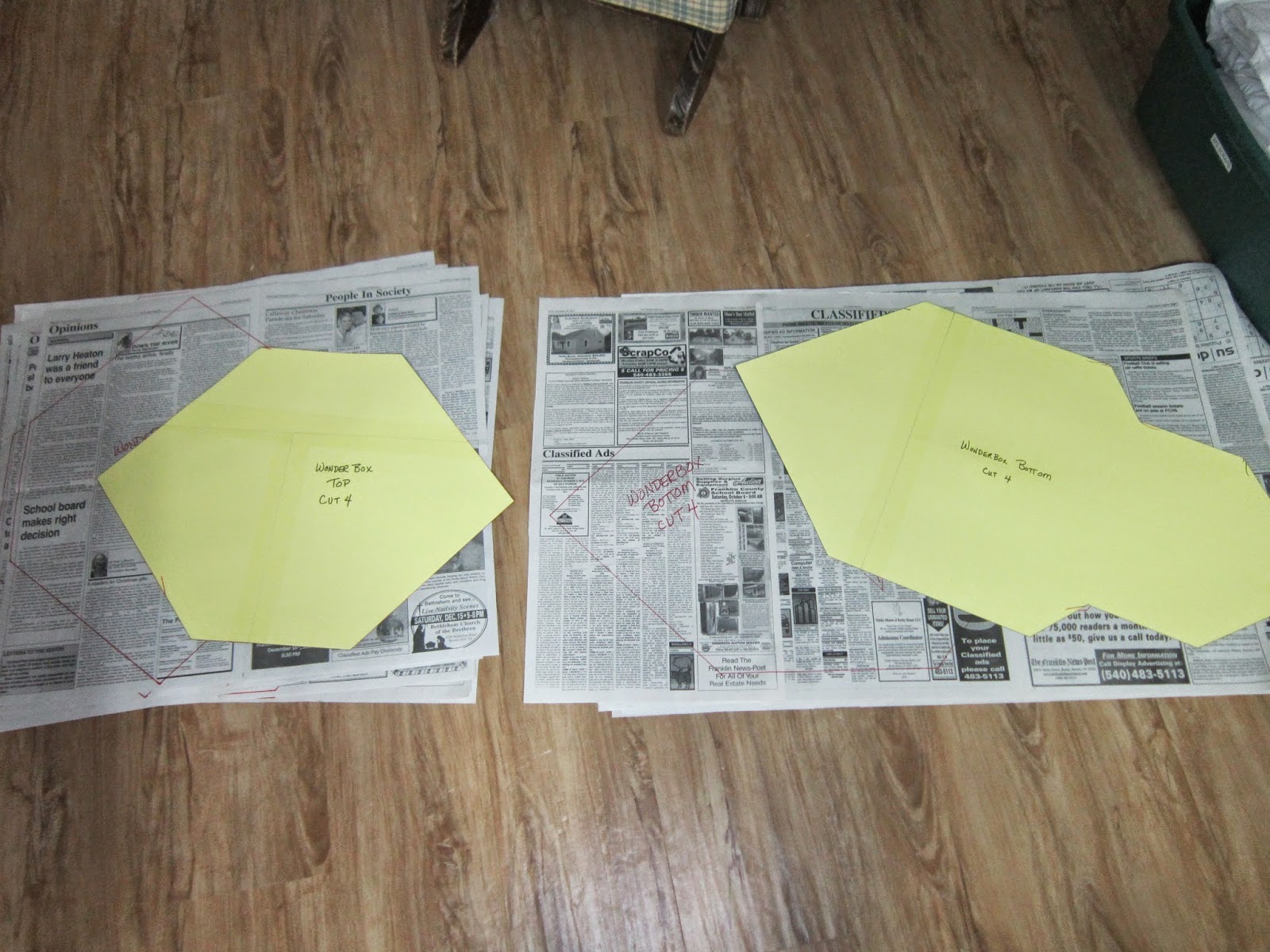 In addition to activities with the children, our women's organization is planning a craft day and they wanted me to do some sewing activities. One of them is to make these Wonder Boxes. They're big pillow-type things that you sew together and then fill with polystyrene beads--bean bag filler. You use them to cook with, sort of a powerless crock pot. I drew up the pattern on heavy poster board and then traced off ten copies of the top and bottom patterns onto newspaper. The ladies will cut out their fabric and bring it to the activity ready to sew. 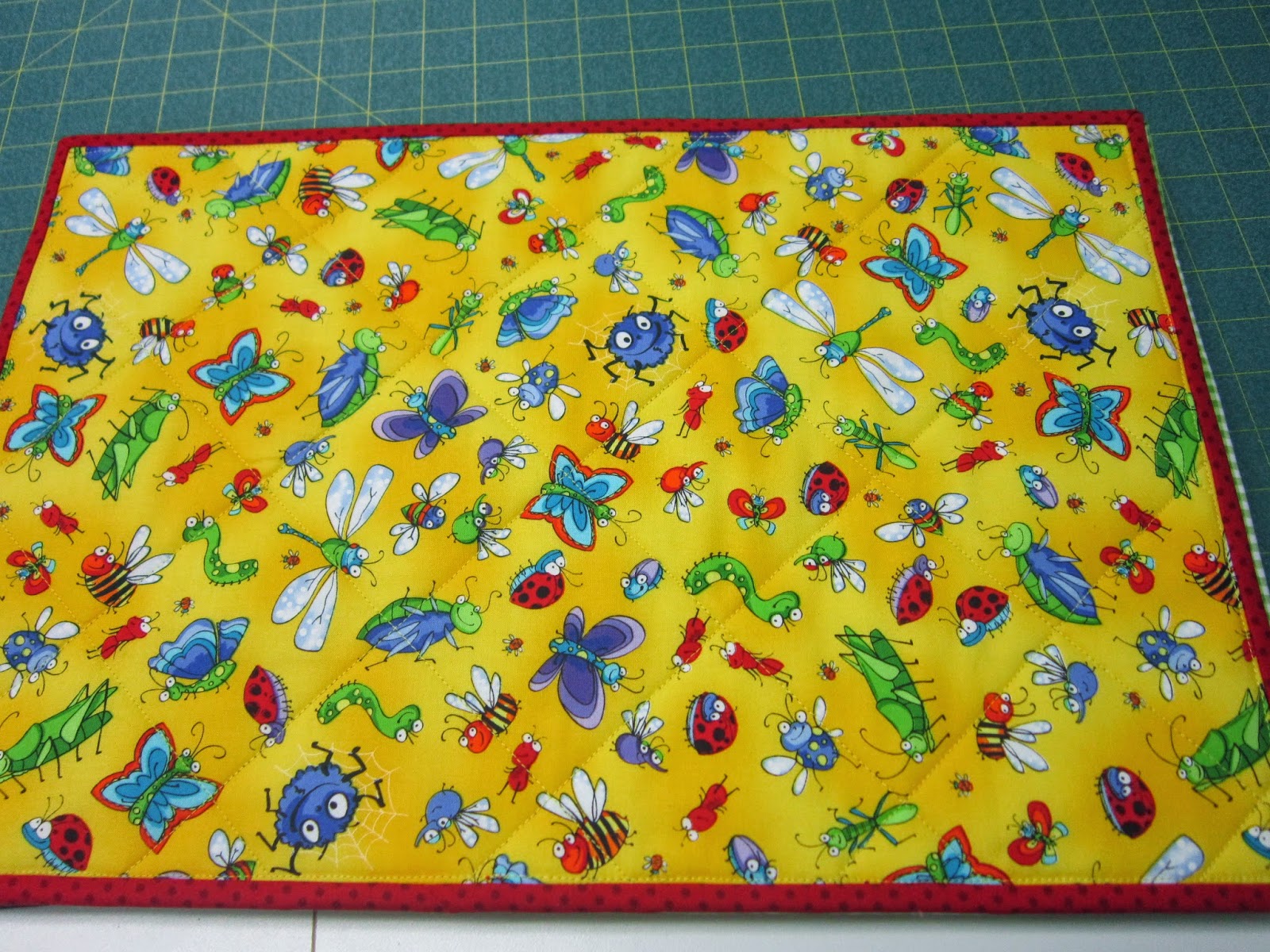 One last church project this week was for our youth Service Auction. They actually auction goods as well as services and the money they raise helps to pay for them to go to camp in the summer. The auction is a fun activity and this year they also included a spaghetti dinner. Last year, I offered two services--piecing a quilt as one, and quilting a quilt as another. This year I really didn't want to have those kind of obligations hanging over me, so I decided to make something for the auction. And I decided to make something no one probably already had--12"x 18" hot pads--big enough to hold a roasting pan! 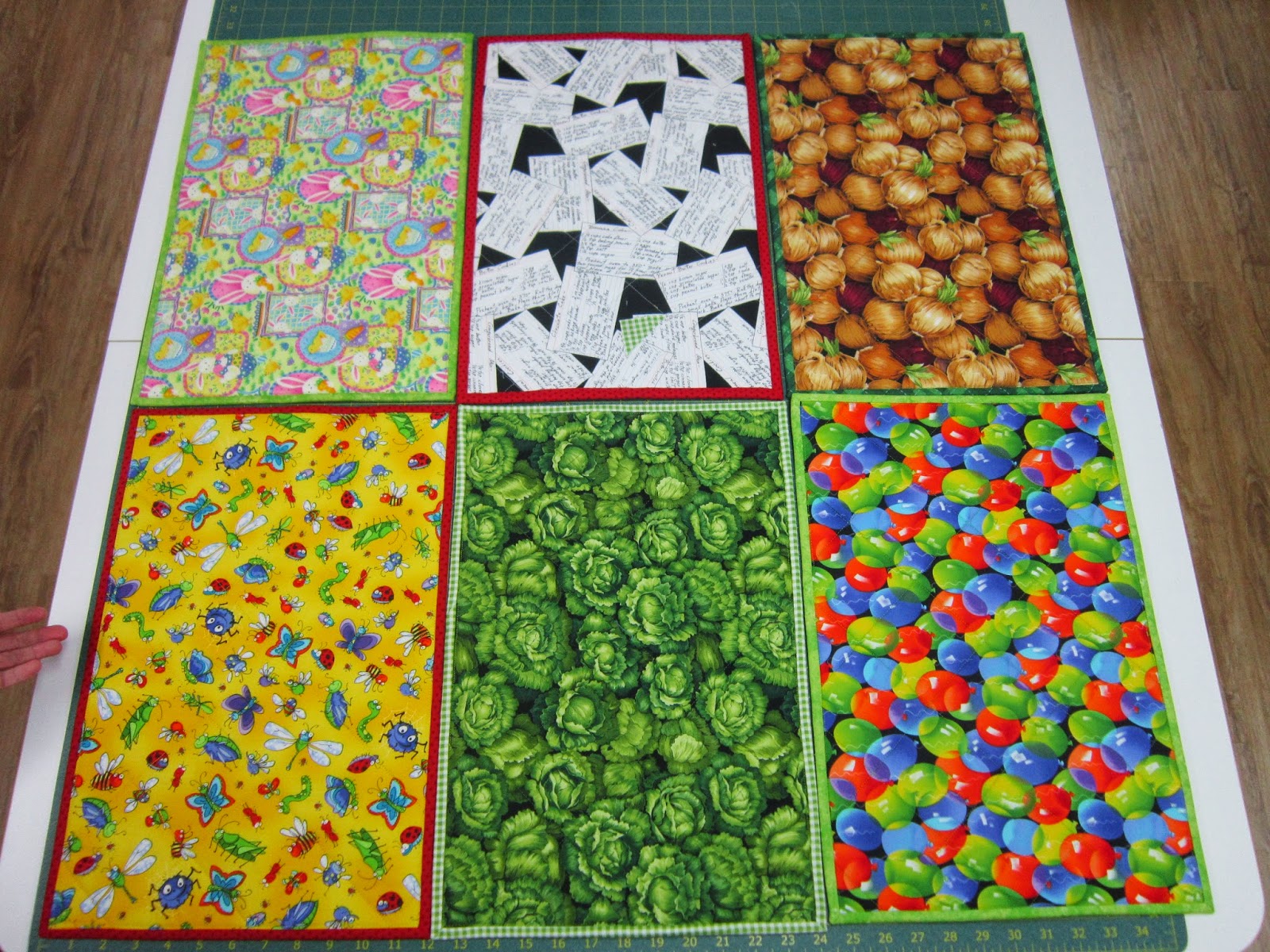 I made six of the pads and used both Insul-brite and a layer of cotton batting between the fabric layers. I was able to figure out exactly how long my binding should be and so I sewed it all together before attaching it to each pad. Then I just turned and machine sewed to the other side. 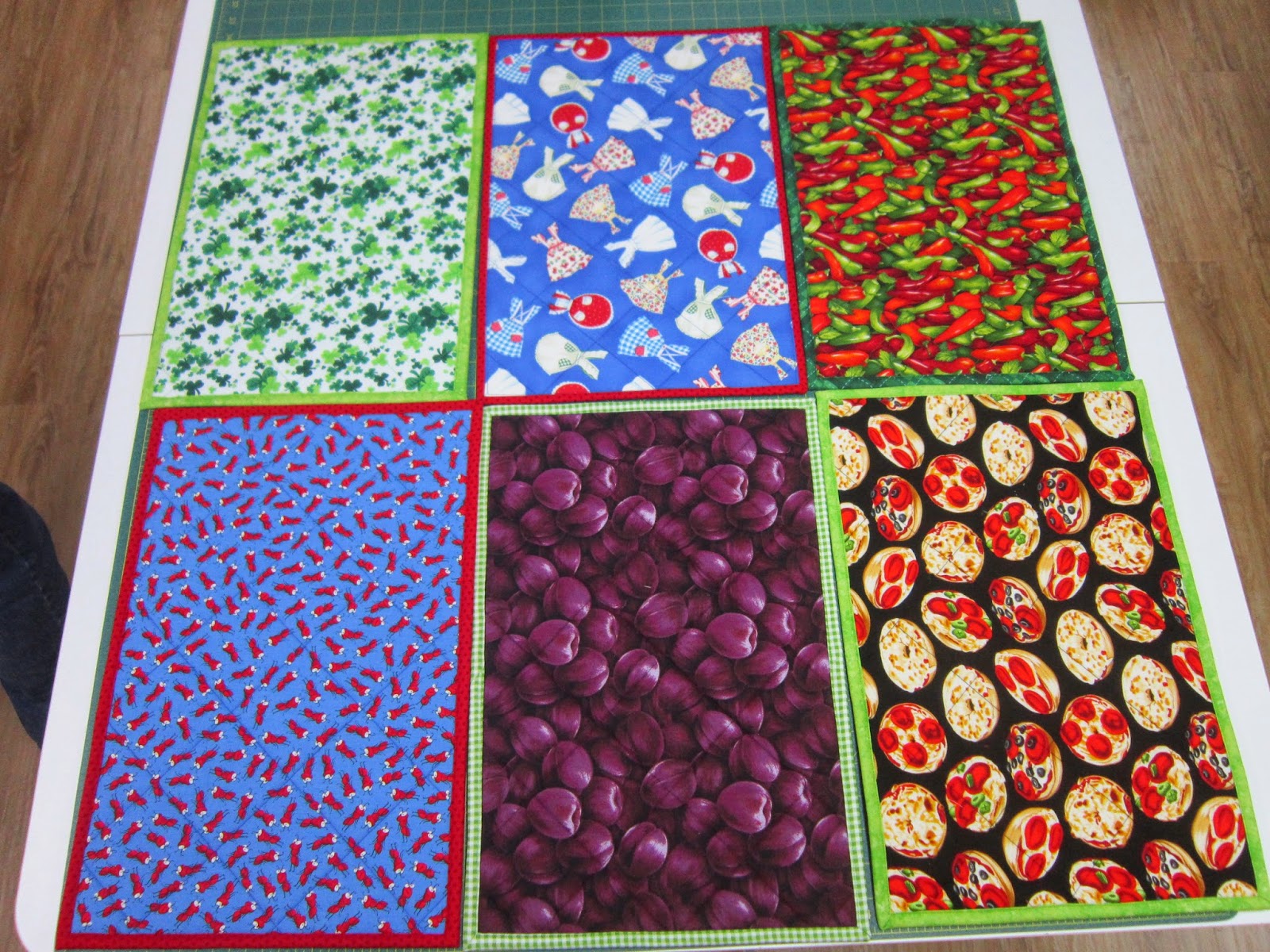 And speaking of other sides--here they are, all turned over. The auction was last night (Friday night) and they all sold very quickly and well, going from $15 to $25 each!

I really didn't get much sewing or work done this week on my own projects, but there's always next week and another opportunity to...Get More Done!
Posted by Gwen at 8:19 AM